After last weeks interview with Jason Daniels, we're back with another Five Questions. This time it's Manager Victoria Ticklefeather, currently working for Chikara Pro in the US. 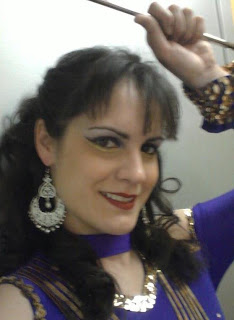 When did you first get into Pro Wrestling and what drew you to the sport?

Veronica Ticklefeather:
I was four or five years old when I got into wrestling. My dad was taping Saturday Night Main Event with Hogan v. Andre. Andre won the match and gave the championship to the Million Dollar Man. After that, I was hooked. Yes, I was a Hulkamaniac; but it was the presence and athleticism of Bret Hart that sealed the deal. Mr. Perfect, Piper, the Rockers, and Davey Boy Smith became my favorites as well.

If you could manage any wrestler or personality (dead or alive) who would it be and why?

VT:
Someone international. Either Bull Nakano or the British Bull Dogs. The reason why is to have a range of talent to manage. Plus, if Americans do not know the international talent, it's my obligation to be that person to open the door and let the fans know who they are.

What is your favourite match of all time?

What is your opinion of the current state of Women's wrestling in WWE and TNA, as well as across the world?

VT:
WWE: There's talent there but, not given enough time on Raw or Smackdown. Yes on their other shows on Saturday mornings and Wednesday night Main Event. However, they need more exposure and better stories to tell. I believe the NXT women are hungry and ready to prove what they got. So much has changed over the past years. I truly miss Beth Phoenix, Melina, and Kharma. But there's talent there that's ready.

TNA: Out of the two "big" companies, TNA has the best women workers. This company could expand so much like they do with the X division. Bring in talent from Japan, Germany, Europe. They could introduce so many talented women across the globe and they have the resources to do it.

Independents: Women are hungry, tough, strong, and intelligent. We have so many veterans to learn from and a great stage to perform and improve. These are the women you should be watching if you want to see real women's wrestling. Keep an eye out for Alpha Female, Heidi Lovelace, Hailey Hatred, and so many to make a huge impact on today's wrestling. Not just women's wrestling, but, all wrestling.

Where can the readers of Across The Pond catch you next and will you be here in the UK anytime soon?

I'll be part of AIW on April 26th. Most Chikara and AIW shows are in America only. But Chikara will have their iPPV on June 2nd, so don't forget to order it! I would LOVE to come across the pond and manage a lucky talented wrestler in the UK. Make some noise fans! Let people know that you would like for me to come to the UK. I love British wrestling and it would be a honour (see what I did there ;)) to be part of an UK wrestling show. You can reach me on twitter: @veronica_mm1 facebook: Veronica Ticklefeather instagram: Veronica_ticklefeather email: veronicammbd@gmail.com
Thank you UK fans! Hope to see you guys soon!