It's been a while but Across The Pond is back and we're catching up with the last week of wrestling, starting with last weeks episode of WWE Superstars. 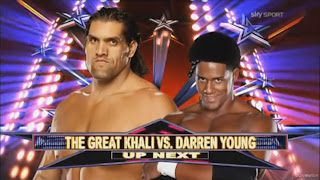 Now let's be honest, The Great Khali is never going to have a technical masterclass of a match, and there were no surprises here against Darren Young of the Prime Time Players. Young manages to carry Khali to a half way decent match, controlling Khali's legs and keeping him grounded for the majority of this short match, with The Punjabi Playboy picking up the win after a Brain Chop.

However, for me, the real interesting thing as part of this match, has to be the mistreatment of Natalya as of late in WWE. Especially at a time when WWE's Divas division is looking extremely lacklustre with only a hand full of competitors, it seems strange that WWE would place arguably one of it's strongest female competitors in this strange group of characters.

Another division that seems to be floundering as off late is the Tag Team division. Although Team Hell No are doing a solid job as Tag Team Champions, the title sometimes seem to get lost on the pair, whose ongoing storyline overshadows the belt. However WWE has not left itself with any viable options in terms of challengers for the belt. We've seen The Prime Time Players lose in a Handicap Match to The Miz recently, and having Mr. No Days Off lose to someone who clearly isn't going anywhere isn't going to help the situation. 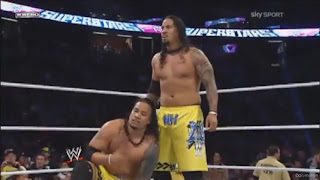 Continuing with the Tag Team division, we had The Usos taking on Epico & Primo for what seems like the millionth time, however the two teams continue to impress with their matches, coming up with new elements for their matches, which keep their encounters feeling fresh. A number of false finishes including a butt bump from Jey and a nice neckbreaker from Epico, quicken the pace towards the conclusion of the match, where Jey hit a huge Superfly splash on Epico and Jimmy delivered a sweet Superkick to Primo.

It will be interesting to see where these teams go from here, as both have been made to look weak by the likes of Team Hell No and The Rhodes Scholars, both of which it is clear will eventually split, and WWE will have to spend time making both look like viable options as Tag Team Champions. Personally I think the Usos have the most potential as they are clearly the more charismatic of the two teams and can get a reaction from the crowd when needed, with Epico and Primo's strange face turn in the Summer of last year seemingly confusing the fans and removing any momentum which the team had going forward.

Finally, there was a multitude of recaps from Raw, including the ending of the Del Rio Vs. Swagger & Colter handicap match and Dolph Ziggler's Money in the Bank Cash in, Undertaker and Team Hell No's encounter with the Shield and finally John Cena's match with Mark Henry including Ryback's pre-match attack. Do we really need this many re-caps? It feels a little bit like WWE insulting the intelligence of it's fans.