It's back! Five Questions With... Returns with British up-and-comer Josh Alden. 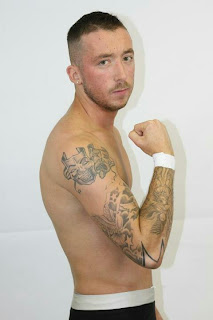 1. When did you first get into Professional Wrestling and what drew you to the sport?

My first memories of wrestling are when I was at my cousins house when I was at a very young age like 4 or 5. He used to show me all of his wrestling figures and would lend me WWF videos which i would take home and watch. I became obsessed straight away and used to watch WCW Nitro every Friday night on TCM (TNT UK) and also got my Auntie to tape all of the WWF RAW shows and PPVs. I started to grow out of wrestling when I was around 14 and stopped watching for a couple of years but then fell back in love with it again and I am still a huge fan to this day.

I always wanted to do something with wrestling but never thought it would be possible until I got in touch with El Ligero over Twitter. He pointed me in the right direction which was UKW based in Wakefield, Yorkshire which is the closest promotion to where I live. MVK Valkabious who WWE signed last year and Danny Steel from Sheffield are my trainers. I have only been training for 9 months with only a few academy show matches under my belt so I am a rookie still with a ton of stuff left to learn. I'm just like a sponge at the moment trying to get as much training as possible and soak everything in.

2. If you could face anyone in the ring who would it be and why?

Liam Lazarus who is the UKW Academy champion would be someone I would love to have a match with. He has been training a couple of years and is starting to get bookings across the region and rightly so. He's a great talent and a top lad.

3. What're you're all time favorite matches and why?

One of the first matches which I recall being glued to was Shawn Michaels vs Steve Austin from Wrestlemania 17 (Editors Note - It was actually Wrestlemania XIV). Even though I was a kid at the time just the whole story leading up to it and all the hype sucked me in. HBK and Austin were and still are two of my all time faves.

4. What's your opinion of the current state of the major wrestling companies as well as the scene here in the UK?

I think the PG era is what it is and as much as I don't like a majority of the things about it they probably won't change anytime soon. I mainly watch WWE and TNA whilst also trying to catch up in some indy stuff from time to time. I like most fans would love a resurrection of the attitude era but that ain't ever gonna happen. They are the biggest wrestling company in the world and will most likely remain so for as long as they are in business. TNA in '05 in my opinion were shit hot especially with the X-Divison guys but since they tried competing with WWE they fell flat on their faces. Since they went on the road permanently the product slowly seems to be getting better and moving from the Impact Zone in Orlando is the best thing they could have ever done and they should have done so a long time ago.

UKW is taping a new TV series called Revolt with top talent from across the country after they move to their new venue. NGW in Hull is a fast growing company which is receiving a lot of attention and bringing up great homegrown talent. Preston City Wrestling are bringing in top international guys and putting on great shows. Also ICW in Scotland is getting a lot of attention and has the old ECW feel about it.

5. Where can our readers catch you next and how can your fans get in touch?

The Beeston Festival, Leeds for UKW on Saturday 8th June.
Get in touch via twitter @alden90
Posted by Unknown at 19:30