Well, we're less than an hour away from TNA's Slammiversary, so I better get going with these predictions! 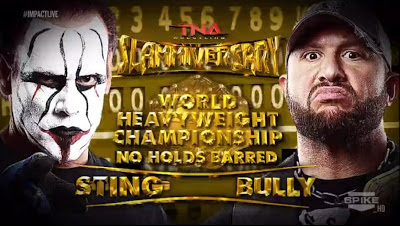 It's been a decent build up towards this one, with Sting being a logical person to go into battle for Hulk Hogan against the Immortal One's Son-in-Law. However, I don't hold out much hope for this as a physical contest, whilst Bully has been having some of the best singles matches of his career lately, Sting looked barely capable of a Tag Team contest on Impact recently, so this could be a slow short match up, not befitting the story line or a Pay-Per-View Main event. I'd expect run-ins from numerous Aces and Eight members, both Hulk and Brooke Hogan, and probably a number of TNA Roster members, possibly even the big name signing Dixie Carter has touted on Twitter recently. 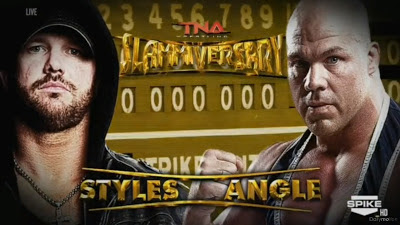 Now, we've seen this match a number of times throughout the years, in various different combination, but no point has it ever become a chore to watch Kurt Angle and AJ Styles create magic within the squared circle. Once again, I'd expect AJ and Kurt to pull out an absolute classic, with a brand new psychology to play with and AJ settling into a new edgier character, this will be a more than entertaining contest. Hopefully this match is given a good half an hour and there is no interference from Aces and Eights or anyone else involved in this story. 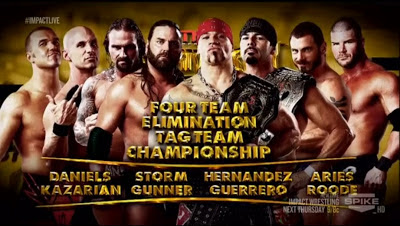 Featuring seven proven talented in ring competitors and one fairly unknown entity, this should be an explosive contest. The psychology has been built well over the last few months of Impact with each team having a number of different ties to another, TNA has to make sure this psychology pays off in this contest to make it feel like a satisfying contest, a mere collection of moves will not be enough. There's a number of ways for TNA to head with this but with a number of these guys surely heading for the Bound For Glory Series after Slammiversary there seems only one logical choice. 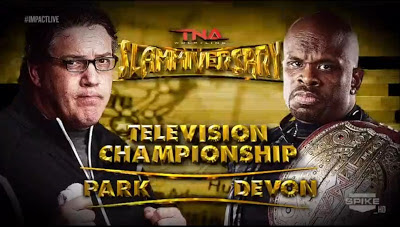 It's been a long time since we've seen Devon defend the Television Championship, despite Hogan's decree less than a year ago that the TV title should be defended every week. So it won't feel like a massive moment if Park wins the title, which it might have if the title had been handled properly as of late. The Parks character has been handled well and is always entertaining, but it really is time for Abyss to return as it feels like the Joseph Park character can go no further in the world of wrestling. I'd expect an appearance from Abyss in this match, probably appearing from under the ring, after Parks has gone underneath. 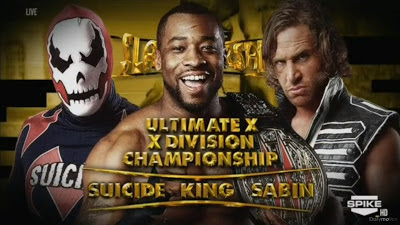 Although I believe a Kenny King vs. Chris Sabin singles contest would have been a more satisfying one in terms of storyline, this will no doubt be an entertaining spot laden match. Hopefully Sabin doesn't put himself in too much danger, as another injury would surely end his promising career. I'd prefer to see Kenny King's reign go a bit longer as he's an entertaining character and a long running rivalry with Sabin leading into Bound For Glory could light up Impact throughout the summer. 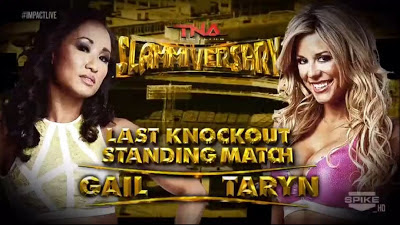 Would much rather have seen a rematch of Mickie James and Velvet Sky take this spot on the card, as Taryn Terrel has shown little to show she deserves tp have been promoted from Knockouts Referee, especially with ODB taking her place. It will be interesting to see how extreme this match goes, as I'm expecting little more than a cat fight. Although I'm not a huge fan of Terrel, I expect TNA to build her into a singles feud with the newly heel Mickie James in the near future. 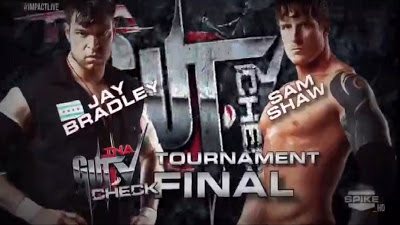 Wouldn't say I know too much about either of these guys, but that's mainly due to TNA not using them that much since their Gut Check challenges. Bradley would seem the more charismatic of the two, with Shaw being more of a body guy, but that's about all we know about these two rookies. 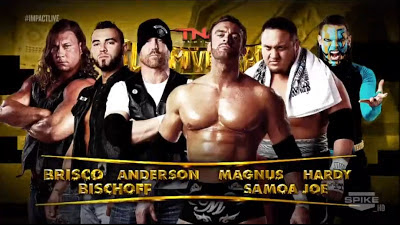 There's four extremely talent competitors in this match and then there's Wes Brisco and Garett Bischoff. Now I'm not completely down on these two Aces and Eights member, we just haven't seen enough of them in the ring to prove they have much talent. Yes, Brisco has had some decent matches with Kurt Angle, but Angle rarely has had bad match, no matter who he is facing! I was also pretty TNA announced this match to feature DOC instead of Anderson, obviously plans changed by the end of the show. With all three members of on team heading for the Bound For Glory Series, it seems their can be only one choice.

It's looks like it's going to be a mixed bag tonight for Slammiversary, some extremely entertaining contests on the line up, but some that might be difficult to stay awake through! Enjoy the show people!
Posted by Unknown at 00:18