Main Event this week may not have delivered in the star power that we’ve come to expect from this show since its inception, bar The Shield, but in terms of match quality it definitely delivered.

The Usos & Justin Gabriel vs. The Shield

The Shield brought the star power to this main event contest, against three competitors who have been underutilized by WWE for some time. The Usos seemed to getting a push a few weeks ago with a victory over The Prime Time Players on Raw, but haven’t been seen on the A show since. Justin Gabriel on the other hand, hasn’t competed on Raw since November, as has become something of a main stay on Main Event since partner Tyson Kidd suffered a torn meniscus. Whilst Gabriel might not possess the promo ability to be a top level star in WWE, his in ring ability certainly warrants a place higher up than current.

The match was well worked and built up well throughout the contest, with The Shield controlling the majority of the match. The contest seemed to be used to give Roman Reigns some more time in the ring, as he received a lot more time than usual. Reigns has certainly improved since being around Ambrose and Reigns, and has been used well throughout his time as The Shield’s muscle but certainly will have benefitted from this time. There were a number of comeback attempts from The Usos and Gabriel during the body of the contests, capitalizing on the athletic ability of the face team to create some interesting visuals in the ring that we maybe don’t get to see in regular Shield matches. With the comebacks being quashed

There was an awkward moment with Jimmy attempting to leap over Roman Reigns, which supposedly would have been the hot tag that lead into the finish, but as Reigns caught Jimmy, The Shield member looked to fall over, dropping Jimmy on his head in an incident that could have been quite nasty. Luckily, the two managed to think quickly on their feet and Jimmy hit a quick Super kick which allowed for the tag. The ending was quick and exciting, as well as doing a good job of making The Shield look in danger, despite the better knowledge of the viewer. After both Uso and Ambrose went for a cross body, Justin Gabriel perched in place for the 450 Splash, with The Usos taking out Rollins and Reigns. But with Gabriel distracted by the action, Ambrose knocked him off the top and hit his Headlock Driver finisher for the victory. I enjoyed this finish as it built up well, as well as getting the crowd behind the face team as it looked like they were working towards a victory.

Although this was a good contest, I’m not sure what it did for either team. The Shield have been built up well enough already and didn’t particularly need a victory like this, whilst The Usos and Gabriel may have looked good at points, without an appearance on Raw or Smackdown they aren’t going to reach a large enough audience to be taken seriously. WWE could do with building some more regular teams up well so the Shield have someone to eventually drop the title to, the teams are already there and they have enough talent that if used properly could not only create good match with The Shield but also be considered a reasonable threat.

Best of the rest

There was also an appearance from the newly packaged Antonio Cesaro, of course with Zeb Colter. Colter cut another good pre-match promo, further explaining his new partnership with Cesaro, along with berating Cesaro’s opponent Sin Cara for wearing a mask. Zeb is very good with these pre-match promos and definitely helps to build up heat for Cesaro within the crowd, not that Cesaro isn’t capable of this himself, although, as we saw with Jack Swagger, Cesaro had been so ill-used by WWE it had become difficult for the casual WWE viewer to take him seriously on his own.

The match was another good contest between these two, with Cesaro seeming like the perfect opponent for Sin Cara, who seems to struggle with the majority of WWE’s other performers. Sin Cara allows Cesaro to show off his power extremely well, whilst Cesaro’s large frame makes it look even more impressive when Sin Cara goes high flying. The only problem with Sin Cara working in this kind of role, is that you can’t see any of his face due to the mask, and therefore when he is put in submission holds, it is difficult for him to look in danger without flailing his limbs in a ridiculous fashion. Cesaro picked up the victory with a Neutralizer, after grounding Sin Cara with a rear chin lock. I still find this finish strange and will obviously need to be dropped once Cesaro faces more difficult opponents.

There was also Diva’s action with former Diva’s Champion Kaitlyn taking on Aksana. Unfortunately, this match wasn’t able to build on the progression we’ve seen in the Diva’s division as of late, we simply haven’t seen enough of Aksana on WWE TV to actually care about what she is doing in the ring. Aksana dominated through most of the match, included a strange looking crawl around the ring, which looked awkward not only for the audience but also for Aksana herself, which resulted in weird kick for a two count. Eventually, Kaitlyn managed to reverse a charging Aksana, and picked up the victory with a Spear. WWE Diva’s division may have come on leaps and bounds in the last couple of weeks, but two divas does not a division make.

What have we learned from this week’s Main Event?

2. Zeb Colter and Antonio Cesaro have the potential to be a very entertaining partnerships.

3. WWE need to build up more Tag Teams and Divas to help support the divisions. 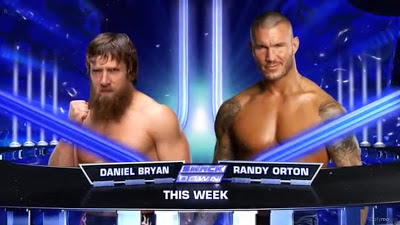