This week’s episode of NXT wasn’t quite as good as we’ve come to expect since it’s revamp, it was still enjoyable but rested too heavily on enhancement matches, which gave the show an unimportant feel for most of the hour. 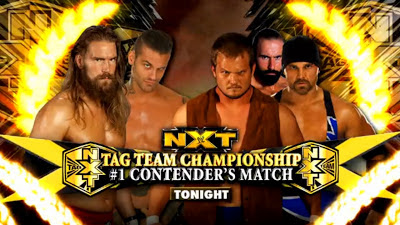 This match was set up last week by Commissioner Dusty Rhodes, and was really the only match they could have put together in terms of a number one contenders match. These are currently the only two teams (and I use the term loosely for Graves & Ohno) on NXT, bar the champions themselves The Wyatt Family, and it is probably the weakest area of the show. Dawson and Dylan have impressed me over recent weeks, with some old school style tag team wrestling, but they haven’t yet been involved in a match against with anyone of the calibre of Graves and Ohno so I was interested to see how they would deal with this type of match up.

The match for them most part told the basic tag team story that we’ve all seen time and time again, with Dawson and Dylan, working over Graves building towards a hot tag. This section was extremely slow at time, and whilst it’s sometimes good for a match like this to slow the pace right down, it felt like it lasted a little too long. There was a surprising turn shortly after the hot tag with Dawson and Dylan managing to hit their Southern Pride double team finisher, it was a shame then to see Graves break up the pinfall before the referee had even managed to start a count, as this would have been a nice false finish.

The match picked up from here with Ohno doing a good job of fighting from underneath with some nice defence as offense including turning a back body drop into a sunset flip attempt. With Ohno making the second hot tag to Graves, who looked a lot more comfortable in the position of aggressor with tying Dylan up in the corner with a figure four around the rope being the highlight of this section. With Ohno taking out Dawson, Graves worked Dylan’s leg again before getting the submission victory with Lucky 13. The match certainly got better as it went on, but didn’t quite live up to the sum of its parts, at times feeling a little disjointed.

After the match, The Wyatt Family stormed the ring and took down the number one contenders. Adrian Neville attempted to even the numbers, before Dawson and Dylan recovered to foil at 450 splash attempt. With the heels beating down on Ohno, Graves and Neville, it was left to commentator William Regal to try and make the save, only to get taking down by The Wyatt Family and Dawson and Dylan. After a while Dawson and Dylan looked a little awkward in the ring with The Wyatt’s, especially manager Sylvester LeFort who did very little for his team all night. After Dawson and Dylan left, allowing The Wyatt Family to celebrate before putting some final boots to Regal. The ending was probably the best part of the show as it really left things open to where this will go in the next few weeks. 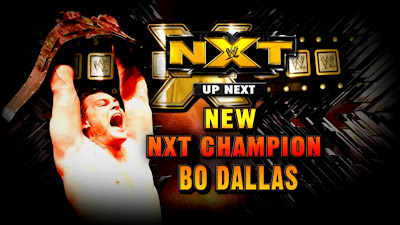 New NXT Champion Bo Dallas had his first match since winning the championship against the newly christened Mickey Keegan (formally Axel Keegan) with Leo Kruger sitting in the corner of the arena after his match with Dante Dash (more on that later). The match wasn’t anything special from the NXT Champion who certainly isn’t liked by the NXT Arena, who even started a short chant for Keegan. This was estentially an enhancement match with Dallas getting in pretty much all of the offence, which at times looked a little awkward as Dallas seemed a little disorientated in the ring. Dallas picked up the victory with an odd looking belly to belly suplex which definitely didn’t look anywhere near like a finishing move, the match would have been better off ending with Dallas’ version of the Dudley Dog.

With Kruger still at ringside, it didn’t take long for the South African to enter the ring. Surprisingly, he decided to take out Keegan with a nice arm trap suplex and finished him off with a Slice lariat. Kruger and Dallas had a stare down, with Kruger attempting to touch the NXT title, before saying something “Tata” repeatedly and leaving the ring. I have to say I like Kruger’s strange nature and he is certainly something different to WWE programming, whether Bo Dallas will be a good opponent for him in terms of a rivalry, I’m yet to be convinced.

The Women’s Championship tournament continued this week with the last quarter final, pitting Emma against Aksana. Emma did a nice comedic backstage interview with Renee Young pre-match, that really got over the character well, with the comedy suiting the situation and allowing Emma’s character to feel genuinely likeable. She’s certainly over well with the crowd inside the audience the NXT Arena, with plenty joining in with Emma dance on her entrance. The match itself, was probably one of the best Aksana matches I’ve seen as she worked hard in her heel role, controlling most of the match. The finish could have been worked a little quicker with both Aksana and Emma looking a little awkward, although once Emma’s submission finisher DilEmma was in place it certainly looked an impressive hold. I’m certainly interested in the Semi Final contests, and hopefully Paige vs. Alicia Fox and Emma vs. Summer Rae will live up to my expectations.

I mentioned Leo Kruger’s involvement with Bo Dallas earlier in the review, but Kruger was also in action himself against Dante Dash. Another enhancement match here with Kruger dominating Dash throughout the match. Kruger worked over Dash’s arm for most of the match, including the arm trap suplex he later used on Mickey Keegan. Kruger eventually got the win via submission with the GC3, a moved of course focussed on Dash’s arm. Kruger certainly brings a certain presence to the ring which draws you in when he’s competing. I’d like to see how he functions in a feud soon and certainly would like to see him in longer more competitive matches than this.

Big E Langston also had his first appearance on NXT since losing the NXT Championship to Bo Dallas two weeks ago. Langston faced Aiden English in what was less enhancement match, more squash match, with Langston completely bulldozing English. Langston picked up the win with the Big Ending, before the crowd called for “Five!” so Langston hit his finish again for a five count. I’m not quite sure where this will go, with Langston’s days on NXT surely numbered as he continues to impress on the main roster, possibly a rematch against Bo Dallas for the title with Dallas finally making the heel turn to finish Langston’s time off in NXT.

What have we learned from this week's NXT?

1. The NXT Tag Team Division is needs to bolster it's ranks with some new pairings.

2. Bo Dallas needs to step up his game to be considered in the same bracket as former NXT Champions Seth Rollins and Big E Langston.

3. William Regal is a great commentator on NXT, but I'd much rather see him lock it with some of NXT's young talent.