This weeks edition of NXT was heavily based around NXT’s current and future championships with The Wyatt Family defending the NXT Tag Team Championship against the makeshift team of Corey Graves and Kassius Ohno, the contract signing for next weeks NXT Championship Match between Big E Langston and Bo Dallas, and the start of the NXT Women’s Championship tournament with Tamina Snuka taking on Paige. 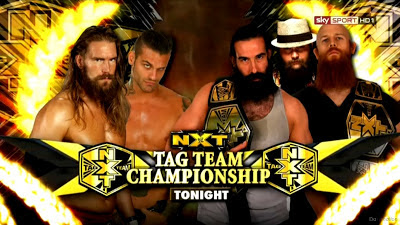 There’s a lot of interest in the Wyatt Family at the moment, with the creepy vignettes on Raw proclaiming there arrival on the main roster of WWE drawing the attention of a mass audience. Therefore it was a good opportunity to see how the tag team were advancing in what can be expected to be one of only a handful of appearances they have left on NXT. WWE has stumbled upon a fantastic gimmick for Bray Wyatt and at times it’s difficult to believe that this is the same Husky Harris that was part of Nexus just over two years ago, what a difference a good gimmick can make to a career and how well all three of The Wyatt Family play that gimmick!

Before the match there was a duo of backstage interviews conducted by Renee Young.  Firstly with Corey Graves as he built up the main event as well as possible tensions between he and Kassius Ohno. It was a competent promo from Graves as he looked comfortable on mic, with tons of charisma and a unique look, Graves could go far in WWE and along with a number of guys in NXT at the moment, WWE would benefit from having him on the main roster. One of those is guys is Kassius Ohno, who also got an interview with Young, Kassius continued to build the main event, whilst saying that this match was bigger than any differences he had with Graves. Ohno continues to impress with mic abilities although for a guy who spent a long time as a big star on the indy circuit this is to be expected. Ohno brings an impressive intensity to this good, yet short, promo, which draws the audience in, it really is difficult to think about anything else when Kassius is on the microphone.

The match was a good contest, although maybe a little basic, not really veering to far from the blueprint of a tag team match. With the heel team having the upperhand over Corey Graves for most of the contest, keeping him distanced from his corner and tag team partner. Any time Graves would seem to gather any momentum the Wyatts would use some underhanded tactic to keep him from making the tag. After a nice series of quick pin attempts from Graves, he was able to escape and make for the hot tag. Kassius Ohno preceded to clean house with the Wyatts leading to near fall after a superb senton. The finish came when Bray Wyatt made his presence felt with a clubbing blow to the back of Ohno, Graves retaliated by flying over the top onto Wyatt, only for Harper to hit a Discus Lariat for the victory. It was nice, pacey ending and felt like this wasn’t the last we’ve seen between these teams.

Luke Harper would look the most promising member of this tag team, both in terms of in ring ability, which is impressive for his size, and charisma, with the lovely series of quick pin covers with Graves and his strange mutterings of “Yeah” throughout the match, however Rowan is also capable in the ring, with a nice over the shoulder backbreaker which due to Rowan’s size looks incredibly painful, he just needs a little more work on his character and presence in the ring.

Earlier this week in the Raw review, I mentioned my dislike for contract signings. They seem pretty pointless in terms of storyline and merely act as a way of filling gaps in the schedule for the majority of the time and for some reason only take place for certain matches. However, there was a lot to be learned from this signing for the NXT Championship Match next week on NXT.

Firstly, Bo Dallas struggles when given a microphone. He lacks charisma and looks awkward when talking, especially in this new supposedly heel role opposite Langston, and he was incredibly easily thrown by the crowds chants as he began laughing at various points throughout his promo which made it difficult to take his new role seriously. Big E Langston on the other hand oozes charisma, looks incredibly comfortable talking to the crowd and surprisingly so works very well as a face. It will be interesting to see if he gets to test this out on Raw or Smackdown anytime soon. I look forward to the NXT Title match next week, as although I don’t rate Bo on the mic, he is a competent in ring competitor and should have a good match with Big E.

Two of WWE’s most talented Divas locked up in a First Round match in the NXT Women’s Title tournament as Tamina Snuka faced Norwich’s Paige. The match was short, but well worked, with only one major error when Paige went for a roll up and Tamina simply fell over, this was however rectified by the end of the contest. It looked to be over after Tamina hit a vicious superkick, dragging Paige by the hair to the corner as she looked for a Superfly splash, however Paige got her knees up and rolled Tamina up for the victory. It’d have to be expected that Paige is heading for the NXT Women’s Championship after this win, with no other Diva being as over with the crowd in Florida it’s hard to look past Paige capturing the gold.

In another backstage interview with Renee Young, we were treated to a confrontation between Sami Zayn and Antonio Cesaro. Now, anyone who’s been keeping an eye on Ring of Honor or any part of the Indy scene over the last few years will know there’s history between these two guys, which has already been lengthend a few weeks ago when Zayn picked up a victory over Cesaro in only his second WWE match. Therefore when a rematch was mentioned it had me almost salivating. It’s sure to be another fantastic contest. Although, it’s a shame Zayn isn’t still under the El Generico gimmick, he’s taken to his new role extremely well, he somehow manages to be funny without being cheesy, Sheamus and John Cena take note.

Elsewhere we also got a pair of pretty much job matches. Firstly, we saw Conor O’Brian taking on former Miz protégé Alex Riley. O’Brian dominated for a long period, before eventually locking in his new finishing submission hold, The Stockade, which looked genuinely painful for Riley. I’m still not quite sure about The Ascension gimmick, it feels a little outdated, and has been surpassed by the Wyatt Family gimmick in the darkness stakes. It could definitely do with some tweaking if O’Brian were to move up to the Main Roster.

Cardiff’s Mason Ryan was also in action against Colin Cassady. This match did little for either man, it was quick and didn’t do much to show off Mason Ryan’s in ring ability which isn’t going to help him disprove my assumptions that he is merely a “body guy”. Ryan has a new finishing move which involves a torture rack spun into a neckbreaker. It looks pretty dangerous and I wouldn’t be surprised if someone get’s injured from it pretty soon.

What have we learnt from this weeks NXT? 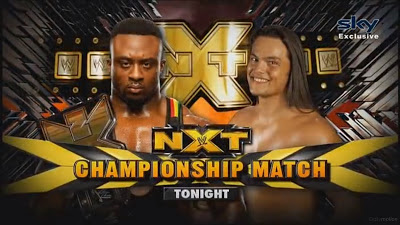