As of late, WWE has begun transitioning Smackdown from its own brand into more of a companion piece for Monday Night Raw. Each match being a continuation of a storyline seen on Monday Night, but with little repercussions for next week. You don’t have to watch Smackdown to know what happening on Raw, but it will definitely add to your enjoyment. 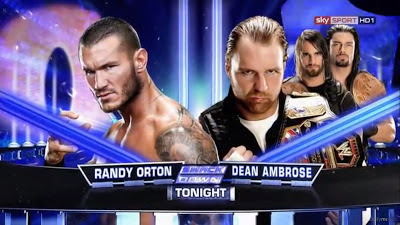 For this match I was hoping Dean Ambrose would be able to bring something out of Randy Orton that hasn’t been seen for a long time. That thing would be passion, little too often as of late we’ve seen Orton go through the motions and on occasion even edge towards boredom. Its clear Orton is tired of playing his current character and like many of the audience feel like it is time for a change. However, even Ambrose couldn’t make Orton break this spell in what should have been a fantastic contest.

Not that what was put on in the ring was bad by any standard, it was a solid contest, but knowing how good it could have been makes it even more frustrating. The Viper hitting a nice back suplex to Ambrose onto the barricade and Ambrose sending Orton into the steel steps were probably the highlight of the contest, which surprisingly saw Orton dominate throughout with his usual spots and rest holds. After “vintage” Orton with a rope hung DDT, we finally got a glimpse of the Legend Killer of old as began to work the crowd in anticipation of an RKO. This was however cut short by the rest of The Shield who ran in to beat down Orton.

The save for Orton somewhat surprisingly did not come in the form of tag team partner Sheamus, help was instead on hand from Team Hell No. With Orton and Kane both down, Daniel Bryan continued latest in ring frenzy by annihilating the Shield, to the delight of the Edmonton crowd. It’s going to be interesting if this even gets a mention on Raw or where this is going to go from here, as it looked as if Hell No were done with the Shield after Monday’s Tag Title defeat. After seeing the Shield be impossible to take down for a number of three man teams, it seems a bizarre decision to have them taken down essentially by one individual.

The absence of Sheamus from the save is an interesting one. Surely Orton’s tag team partner would be the one making the save here, to build towards their expected tag team title contest with the Shield at Payback as was teased on Monday. However, although Smackdown seems like companion piece to Raw, it wouldn’t seem like there is a lot of communication between the two shows and I would doubt if Bryan’s demolition of The Shield is even mentioned next Monday Night.

The evening started with a couplet of matches involving the Shield and Team Hell No. Firstly, we saw Seth Rollins take on The Big Red Machine. In WWE, Seth Rollins is yet to show that IT factor to warrant deserving a singles career that was so clearly present when portraying Tyler Black in Ring of Honor. Yes, his in ring performances have always been fantastic, but once separated from his Shield stablemates he has, at times, looked out of his depth.

Here against Kane was no different, a decent clash but nothing special. Rollins is still looking to find that niche in WWE to build interest in his singles contests, which came so easily to Dean Ambrose, albeit this was only Rollins’ second singles match since moving up to the Main Roster and I have no doubt that given more of an opportunity to develop his character Rollins will continue to improve in these kinds of contests. The ending to match was clever with the referee reprimanding Reign’s for getting involved in the match, only for Daniel Bryan to push Rollins off the top rope and into a huge chokeslam from Kane.

The next contest started straight after with Roman Reigns taking on the man of the moment Daniel Bryan.  Although shorter than its predecessor, this was much more entertaining contest with a clear story being told throughout the contest.  Bryan continued a frenzied style within the ring as he looks to prove he isn’t the weak link within Team Hell No, with his speed and technical ability getting the better than Reigns at every turn. A beautiful crucifix transitioned into the No Lock by Bryan looked like it might have been enough for win, until Reign’s power and a little help from Rollin’s allowed for the rope break. Kane sought to counter Rollins at ring side with a nasty looking big boot. It was here the match came to a disappointed conclusion, with Kane delivering an uppercut to Reigns leading to the disqualification.

As The Shield celebrated victory, Bryan and Kane began to argue in the ring and it looked like we were finally going to see the demise of Team Hell No. With Kane eventually walking away from Bryan who chased him up the ramp. It would appear that the snap from either member of the group is not too long away, however with the group returning later in the night, WWE seems to sending a great story into a rather confusing on. Yes, this might feel unpredictable, which many have been asking for from WWE, however I don’t think this is a conscious decision by creative as it seems more like they simply don’t know what is happening.

The number one contender to the WWE Championship was also in action against Kofi Kingston. Ryback managed to give away what was to come later in the contest, by looking under the ring before the match, which seemed like a rookie error, but if it was deliberate decision it was also silly decision by whoever in creative came up with it. The match was entertaining if not predictable, with Ryback getting the lion’s share of the offence, with a small comeback by the Dreadlocked Dynamo thwarted with a nice reversal of Kingston’s pendulum kick. Ryback finished up with the Meathook Clothesline and then Shellshock to tie up the victory in what felt like a foregone conclusion from the offset.

Afterward, Ryback went out for the tables which had been shown earlier, proceeding to power bomb Kingston through not one, not two but three tables, with the crowd chanting “We want more” throughout. If this was WWE’s attempt to get Ryback over with the crowd as heel, it obviously didn’t work. All that was achieved by this segment was injuring a talented Kofi Kingston, who could be out for a few weeks. Allowing some with such a reckless record in the ring to power bomb someone three times through tables may not have been the smartest decision by WWE, as they’ve lost a strong member of the midcard.

Chris Jericho also made an appearance with a nice backstage interview with Renee Young. Jericho, as it now expected of the veteran, produced an entertaining promo revolving around his match with CM Punk at Payback and Punk’s relationship with Paul Heyman. Jericho went on to have a great short contest with Cody Rhodes. There was some really solid in ring work throughout with some nice reversal from both men keeping the match fresh and speedy, including a nice roll up by Cody out of the Walls of Jericho and the finish with Jericho catching Cody’s Beautiful Disaster kick and putting in the Walls once more for the victory. I could definitely see a decent rivalry possibly developing between these two later in the year, to help Rhodes’ get back into a World Title picture and finally cement his place in the main event picture.

Alberto Del Rio and Big E Langston faced off once more in Singles action. We’ve seen this match a few times in the last few weeks and although it’s always a good clean match, there really hasn’t been much progression in terms of story as WWE treads water awaiting the return of Dolph Ziggler. With AJ Lee raking the eyes of Del Rio with referee distracted, allowing Big E to hit the win with the Big Ending. After the contest, the Big E and AJ split was once again teased with AJ clearly annoyed with Big E for not acknowledging her help in the victory. Big E is beginning to look ready for singles run, however it will be interesting whether WWE keeps him heel or if he returns to the face that was so popular in NXT.

In repeat of last week Curtis Axel took on Sin Cara. Before the contest Paul Heyman allowed his client to wax lyrical about his victories over John Cena and Triple H. Axel continues to improve on the mic and giving him these opportunities can only help him going forward. Axel’s match with Sin Cara was similar to last week, although Sin Cara showed the sloppiness that has caused him to become out of favour with WWE, with a dodgy handspring elbow attempt causing Axel to work to sort out his mistake. A strange ending saw Axel win with a Perfect Plex, however with John Cena already kicking out of the move, is there much point pushing this as Axel’s finisher from now on?

After the popularity of last weeks “Gordian Knot” segment, WWE produced another cracker here with Damien Sandow presenting “The Shell Game” With Sheamus attempting to find the red ball from under one of three cups. No matter how hard both Sandow and Sheamus tried they could not save what was an awful idea. Sheamus finished up with Brogue Kick to Sandow. Sandow and Sheamus could have an interesting feud, however this is certainly not the way it should be presented!#

Finally
What have we learnt this from this week’s Smackdown?

1. The Shield aren’t quite ready to break out on their own yet.

2.  Ryback isn’t quite ready for his Main Event push, but he’s going to get it anyway

3. Smackdown isn’t quite as important as it used to be, but is certainly still an entertaining watch.
Posted by Unknown at 23:15