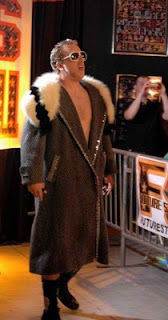 Well my earliest memory of pro wrestling would be seeing the Bushwackers march to the ring during a entrance on Sunday Morning Superstars. I loved the wild, larger than life characters and have been hooked ever since.

2. If you could face or team with anyone in the world, who would it be?

I would LOVE to be able to tag with RAY STEVENS, the legend that made the San Francisco territory what it was. As for opponents that list would consist of: Dick  Murdoch, The Funks, Curt Henning, Rikidozan, Buddy Rogers. just to name a few.

3. Which wrestling shows do you currently watch and what do you think of each?

Well honestly I watch all the top Indy feds and WWE to stay in the loop on what's going on in the biz. but I watch old Mid-South, Memphis, San Francisco, and WWWF tapes from back in the day to study the true ART form of PROFESSIONAL WRESTLING. I feel this "strong style" that is so popular on the Indy scene (at least over here it is) is a mix of American and Japanese styles, which doesn't translate well over here in America. As Japanese physiology is completely different than American physiology and it doesn't attract me as the classic American pro wrestling does. I have no problem with the "strong style", just not my forte.

Well I just had one successful title defense against Former WWF superstar GANGREL,
My match with So-Cals RAY ROSAS (@RayRosas) was extremely fun and our chemistry is always amazing. keep your eyes out for him. And last but not least any match me and my tag partner THE RIV (@ratkingriv) any match we had with the Suburban Commandos (@subcommandos). Those two are hands down one of the greatest tag teams on the west coast, and deserve a break at any moment.

5. Where can our readers catch you in action next and will you be making your way across the pond anytime soon?

You can catch me all over California on All Pro Wrestling YouTube, Devil Mountain Wrestling YouTube. as well on Twitter @Levishapiro. I do have some plans on trying to come over the pond to hopefully work for PRESTON CITY WRESTLING and to visit a close personal friend Kay Jutler.
I'd like to close by saying thanks to James Marston and Across The Pond for reaching out to me for the.interview and hope to see you across the pond soon!

We'd like to thank you to, Levi, for the interview.

Next week: Will Jackson