After last weeks interview with J.J. Dillon, it's now time for Five Questions With... 4 Corners Radio co-host and writer of the Suicida Appraisal, Martin Dixon. 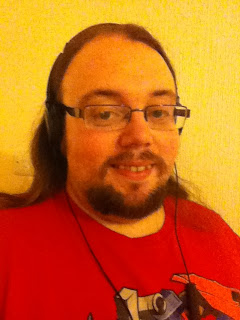 1989, Summerslam was airing on Sky TV and a young me happened upon a showing of that event, during the Ultimate Warrior/Rick Rude match. I think what struck a chord with me was the whole "good vs evil" aspect of that period of WWF, here were these superhumans battling for fame & fortune. It was the characters & story being told I was drawn to, and is something I still am drawn to watching wrestling today.

2. Tell us a little about the wrestling projects you're involved in and how they came about?

Well, I'm fortunate enough to be allowed to be part of 4 Corners Radio, where I appear on the live broadcasts of the Tuesday Raw Roundtable and the new 4CRetro podcast, where Me & Billy Carpenter reminisce about Wrestling's "good old days"and I get a chance to show off some knowledge as well as throw out a few jokes. I also write a regular column entitled The Suicida Appraisal, where I take a performer, company or event and write a workplace performance review, examining their strengths, weaknesses and what I'd like to see them do going forward.

As for how this all came about, that's a little interesting. One day when wasting time on twitter, I happened upon a backstage photo of John Cena & CM Punk backstage at an event in Japan wearing the famous Ribera Steak House Jackets & Zubaz pants combo, which was hilarious to me, I then posted that pic & it led to me getting in contact with Anthony Pope, and much Zubaz based banter. A short while after this I noticed a conversation between Pope & Billy, who was asking for submissions to his wrestling blog. I had just started writing a little videogame blog myself & thought I'd wade in too. This put me in contact with everyone else during the initial stages of what would become 4CR as we all seemed to "click" with each other. As the rest of the guys talked about doing a podcast together, I thought about joining in, however being on the opposite side of the Atlantic does have it's drawbacks, being hours ahead of everyone means I'm often doing the shows late at night, but anyone must admit a podcast where the hosts are thousands of miles apart is a hell of a gimmick.

3. What's your opinion of the current wrestling product on television from various promotions and how do you think this compares to different eras from the past?

I'm not as down on modern wrestling as most, particularly WWE, it is and always has been entertainment above all else. In recent weeks however, there have been some outstanding in ring encounters, particularly featuring Daniel Bryan who seems to have been let off the leash & is routinely having match of the night. Special mention must also go to the vast array of new talent working it's way on screen, either on the main roster or NXT, which may be the best TV WWE puts out.

I'll admit, I don't watch much TNA or RoH, but what I have seen is on the whole enjoyable from RoH, particularly the "RoH vs SCUM" feud. TNA on the other hand doesn't engage me at all, the Aces & Eights story is weak and seemingly overshadows the great stuff happening with the likes of Daniels & Kazarian on the undercard.

First must be the 1992 Royal Rumble match. I've always loved the Rumble as a spectacle, and this may be my favourite of them all. The whole thing may be a showcase for Ric Flair, but it's a masterful performance by the Nature Boy, and pretty much all the big players involved.

Second is Goldberg vs Hollywood Hulk Hogan from the July 7th 1998 edition of WCW Monday Nitro. Not the best technical display, but a spectacle nonetheless. From a rabid Atlanta crowd, eager to see their beloved hometown hero Goldberg dethrone the despised Hogan, to the fact that this PPV calibre match was given away free on TV. This is a perfect example of everything that was right and wrong with the Monday Night Wars, this match was given away free, but the constant chase for ratings meant that PPV events were often little more than setups for the next night's episode of Raw or Nitro, this diminishing their prestige. But outside of all that, this was arguably the peak of WCW, and a match I find myself watching time & again.

Last but by no means least is Hiroshi Tanahashi vs Kazuchika Okada from this year's January 4th Wrestle Kingdom 7. I do have a huge admiration for the Japanese method of Puroresu, and as long term listeners to the podcast will know, I am a massive mark for Tanahashi-San, this match is almost the perfect "Main Event" building and building to a fascinating crescendo, with Tanahashi retaining his IWGP heavyweight championship, one of the most respected titles throughout the wrestling world.

5. Where can our readers find your work and what have you got coming up?
All of my articles and links to the live shows & podcasts can be found alongside the great work by all of our awesome staff & contributors at the home of 4CR on the web, 4crwrestling.com. The show can be followed on twitter @4CRADIO, where staff members join in a livetweet of most WWE & TNA shows, and I myself can be followed @BunnySuicida where (amongst loads of shilling) I'm always willing to join in a discussion or two. As far as the future goes, 4CR is sponsoring upcoming events by AIW (Absolutely Intense Wrestling) and conducting interviews with some of their talent, further details can be found at the website.

Corny as it may be, I'd like to take an opportunity to thank @ATPwrestling for approaching me for this interview, as someone who's only being doing this for a handful of months, the response from listeners and readers has been overwhelmingly positive, and it's moments like this that truly are an inspiration to keep going, so thanks to everyone involved.
Until we meet again readers, have fun with wrestling, because that's what it's there for.
Martin Dixon

We'd like to thank you to Martin for a fantastic interview!