Another strong showing from Ring of Honor this week in terms of in ring action, with two solid matches, one rounding off a long running feud, the other for the World Tag Team Championships. However, as we get closer to Jay Briscoe’s World Championship defense against Matt Hardy next week on television, it just makes it even more frustrating that ROH let their World Champions contract expire and that these tapings take place long before the footage actually airs. 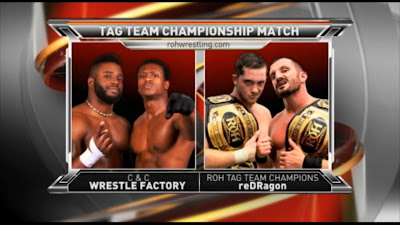 This match was originally scheduled for June’s Best in the World iPPV, before Rhett Titus and Cliff Compton of SCUM were added to the mix, making the bout a three way. Now, I was a particularly big fan of that original match, feeling the three teams didn’t quite gel together, at time making for an awkward match to watch. However, I believed that any combination of three teams would have worked well in a regular tag team match, therefore I was pleased to see these two cross paths here. It’s been great to watch C&C develop as a tag team over the last year and half, as they have progressed their way up the tag team division, whilst reDRagon have managed to hold the division up when it’s looked pretty poor over the last six months.


The match was a decent affair with some hard hitting and fast flowing action, with Coleman, Alexander, O’Reilly and Fish all bringing something to the match. Unfortunately, the match was harmed by a number of factors. Firstly, time, the match only received around ten minutes of television time, which didn’t really allow the match to tell the story it needed to tell in order to get the correct end result, maybe if we’d have seen an extra five or ten minutes of action, the match would have been able to breath and the story unravel correctly. The other element that hurt the match for me, was the amount of outside influence that was included, with American Wolves, SCUM’s Titus & Compton and Adrenaline Rush all involved in a mass brawl at ringside which at time detracted from the action that was going on in the ring.

Now, I understand that reDRagon have an ongoing feud with The American Wolves, and it looks like C&C might be moving into a series with Adrenaline Rush, and SCUM were there because they are SCUM and have a big match to build up to in two weeks, but it certainly removed any feeling off importance that this match had before they came out, which was a real shame. Having said that the action in the ring was always exciting and imaginative, including a crazy frontkick from the apron from Kyle O’Reilly with Caprice Coleman propped up against a chair, which looked to crush Coleman against the barricade. The ending saw Alexander take a dive frontflip springboard to outside onto all the brawling tag teams, which allowing reDRagon to take advantage of Coleman finishing him off with their Chasing the Dragon double team move for a pinfall victory. It was decent finish, and makes sense to keep the titles on reDRagon it their heading into a final showdown with the American Wolves, if only to give the Wolves one more tag team title reign.

Overall, this match was a good display of technical and highflying wrestling, but with the outside interference and time constraints, I did come away feeling a little disappointed, as I know these two teams could do a hell of a lot better, given the chance. As previously mentioned, it looks like reDRagon are heading towards a final showdown with the American Wolves after the two had seemingly been kept on separate paths for a long time, it’s been a nice slow build for these two teams and I’m excited to see the pay off when it finally comes. C&C Wrestlefactory seem to be heading into a rivalry with Adrenaline Rush, both teams have similar styles and should mold well together, and hopefully sooner rather than later we’ll be seeing C&C and Adrenaline Rush feuding over the tag title belts.

Best of the Rest (In the World)

Elsewhere, ROH World Champion Jay Briscoe came to the ring to discuss his title defense on next week’s show against Matt Hardy. It was quick effective promo with Jay saying his shoulder injury, sustained in his match at Best in the World against his brother, Mark Briscoe, would not stop him from beating Hardy next week. I expect next week’s match to be pretty similar in the nature to this promo, nothing particularly pretty and tell a succinct and exciting story.

It’s a shame then, that this match doesn’t really mean a lot. Yes, it is for the World Championship, but we know from ROH themselves that the ROH World Championship is now vacant, with a 16-Man Tournament featuring some of the top names in ROH and elsewhere, commencing shortly. Therefore, the good work that ROH have done in building to Matt Hardy’s title match which has been a pretty big focus on television over the last few months has been pretty much thrown out of the window, because ROH decided to keep the title on someone who was about to leave the company. 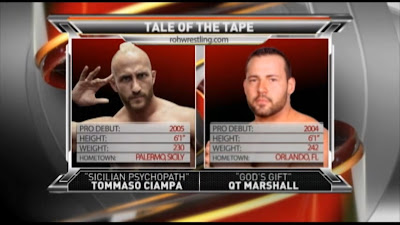 Tommasso Ciampa and QT Marshall seemed to put an end to their feud this week, in surprisingly lengthy contest. I expected Ciampa to basically squash Marshall, however this bout turned into so much more than that, telling a good story and with some nice psycology surrounding Ciampa’s previous knee injury as well as on screen return for Prince Nana, there was a lot going on, but it all seemed to fit together well. The end saw Marshall’s manager RD Evans run into a Project Ciampa after being scared by Prince Nana, before Ciampa eventually hit the Bionic Knee on Marshall for the pinfall victory, after a fantastic contest. I’m interested to see how Ciampa fits in with Prince Nana now, it would be nice to see them reunited as a face duo, with Nana helping Ciampa finally reach the heights that he deserves in Ring of Honor.

Mike Bennett was also in action against Nick Merriman, in what should be the definition of a squash match. Bennett suckered Barrowman in for a Code of Honor handshake, only to hit a Box Office Smash, followed up by Photo Finish for the pinfall victory. It was what happened after the match that was the interesting part, with Bennett deciding where his future in wrestling lied. It turned out that Bennett would be signing for Ring of Honor, however he offered ring crew member and long time rival, Cheeseburger, the contract instead. Of course this was only to sucker Cheeseburger in, as he got struck with a Super Kick from Bennett, with Brutal Bob Evans eventually taking a Box Office Smash. Bennett went on to cut a fantastic promo on the break up of he and Evans’ partnership. It’s surprising that ROH hasn’t pushed Bennett harder over the last three years, as it’s difficult to see what he’s lacking to perform at a higher level.

On Inside Ring of Honor, both Steve Corino, flanked by SCUM member Jimmy Jacobs, Rhett Titus & Cliff Compton and Michael Elgin gave their thoughts on upcoming ROH event. Corino did a good job talking up the next two weeks of ROH television, main evented by Jay Briscoe vs. Matt Hardy and the SCUM vs. ROH steel cage warfare match respectively. Whilst Elgin spoke about ROH’s debut in the Mattamy Athletic Centre (formely Maple Leaf Gardens) and why he should main event that show in his hometown. I really like these sorts of promos, as they bring an old school feel to the show, that feels fresh when compared to WWE and TNA’s approach to programming.

What have I learnt from this week's ROH on Sinclair?

1. ROH have the same ability as WWE and TNA to ruin what should be a good match, with over complication.

3. Mike Bennett and Tommaso Ciampa deserve to be positioned higher within the Ring of Honor ranks.
Posted by James at 23:43