This week’s Ring of Honor television had been built up for quite some time, with Matt Hardy’s quest for a World Championship match being a focal point of the show for a few months. Of course, once again the show was harmed by being taped so far in advance, and by ROH already announcing that Jay Briscoe had left the company and vacated the World Title. 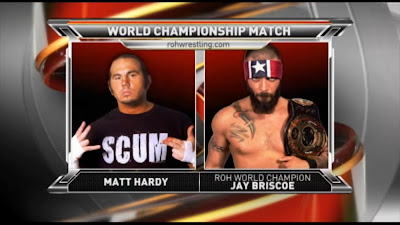 Matt Hardy has had something of a career renaissance in Ring of Honor the last ten months, creating a fantastic character that is easy to hate and performing consistently good promos and video spots to back it up. He’s also been helped by the ongoing SCUM storyline which has developed well over the last year and a half, as it gave him a reason to play the character he was and a group that has become not too dissimilar to the Mattitude Followers in 2003/04. The relationship Hardy has developed with SCUM leader Steve Corino is also an interesting one, with Corino seeming to worship Hardy, but you kind of get the feeling that if Hardy stepped out of line, Corino would kick him to the curb, just like he did to Kevin Steen.

Whilst, Matt’s promos and character have been top notch during his ROH run, his matches have been distinctly average, and unfortunately this was the case here, as well. Whilst the match told a decent enough story with Hardy taking advantage of Briscoe’s injured shoulder, Hardy was for the most part over reliant on his Twist of Fate move, which he used a total of four times throughout the match, and after the second attempt had failed to get a pinfall, as an audience member I wrote the move off for the rest of the match, I’m sure in Hardy’s long storied career, he’s picked up more than that move to use as a false finish. Each time, Briscoe would look close to mounting a comeback Hardy would pull out another underhanded tactic, such as hitting Briscoe with his boot, to regain the upper hand, which at times became frustrating to watch as it meant the majority of the match was worked at walking pace.

The ending saw Hardy go for his FIFTH Twist of Fate attempt, only for Briscoe to block and pull Hardy into a small package to pick up the pinfall victory and retain the World Championship. The ending wasn’t exactly an original one, and the fact that we’d seen Hardy hit the Twist of Fate four times before and fail to get a pin cover, it didn’t really have the element of danger that it should have. It’s a shame that such a strong story going into the match couldn’t deliver in terms of what we saw in the ring, as it left the whole build up feeling a little bit flat. It wasn’t an awful match, and technically there weren’t many areas that you could pull the match up on, it just needed a bit more variety and some insertion of pace to help it round of the story well.


After the contest, we went straight into the build for next week’s Steel Cage Warfare match, with SCUM’s Rhino coming out and annihilating Jay with a GORE. Whilst Jay’s brother Mark made a surprise return to attempt to even the odds, SCUM quickly gained control. With fellow SCUM member Jimmy Jacobs, Rhett Titus and Cliff Compton brawling at ringside with Team ROH member Michael Elgin, BJ Whitmer and Jay Lethal, SCUM took control using their signature zip ties to attach Team ROH to the ring ropes, allowing for the real destruction to take place in the ring. With Rhino destroying Mark Briscoe with multiple concertos (he’s obviously been learning from former stablemates Edge and Christian) Matt Hardy headed to the middle rope to take out Jay Briscoe’s arm once and for all with front elbow drop onto a chair that was wrapped around Briscoe’s arm. It was a good finish to the show that built up well for Steel Cage Warfare next week, as well as providing a storyline reason for Jay Briscoe to vacate the World title.

The only other match of the night pitted rivals Roderick Strong and Adam Cole in a rematch from June’s Best in the World iPPV. This match wasn’t advertised as it looked like we were getting an enhancement match with Cole facing Will Ferrera. However, with Strong coming out to talk about what happened at Best in the World, where Cole won by countout, with Cole apologising and challenging Strong to a rematch tonight. Strong accepted and we had our opening contest. It was a good set up to a highly anticipated rematch, their contest at Best in the World was one of the best matches on the show, that was left open for a rematch with the countout finish.

In comparison to the World Championship match, this was a much better encounter. The match had the changes in pace that the main event didn’t and therefore allowed them to tell a different story, with each man having periods in control of the match in what was a ultra-competitive contest, with a good combination of strikes, submissions and grapples keeping the match fresh. With the reversals coming thick and fast, as well as a number of near falls, a wrestling cliché appeared as Strong was sent crashing into referee Paul Turner who went crashing to the mat. After both men took each other out, it didn’t take long before Steve Corino, who was on commentary, threw a chain into the ring for Cole, only for Strong to get hold of the chain. With Cole taking Strong out with a Superkick, he saw the chain on Strong’s hand and decided to use it for himself, resulting in a Disqualification victory for Strong. It was another frustrating ending for Cole and Strong, and hopefully the two will be booked against each other in a rubber match soon.

There was also a nice package of interviews from Michael Elgin, Jay Lethal and BJ Whitmer building to next week’s Steel Cage Warfare match. All three men talked about Kevin Steen’s addition to Team ROH, with the trio all seemingly apprehensive about Steen’s involvement. Cleverly, we’ve seen very little of Steen and his team mates in the build up to this match, so it’s been left wide open to how Steen will react in the contest and how all the competitors will interact. We know Team ROH doesn’t like Steen, but they’re going to need him on side if they’re going to defeat SCUM next week, it’s an interesting concept.

What did I learn from this week's ROH on Sinclair?

1. Matt Hardy is currently a lot better at creating a character, than creating a wrestling match.

2. Adam Cole's slow heel turn is working well, the rubber match between he and Roderick Strong should be superb.

3. Steve Corino is one of ROH's best assets at the moment, both on commentary and elsewhere.
Posted by Unknown at 00:26