WWE Extreme Rules 2013 is now available to pre-order from www.wwedvd.co.uk, priced at £12.99 and is released on the 29th July 2013. It is also available on Blu Ray disc for £13.99. The show is marketed as the one day of the year WWE goes extreme, headlined by a Steel Cage encounter between Triple H and Brock Lesnar, as well a Last Man Standing Match between John Cena and Ryback for the WWE Championship and an Extreme Rules Match between Randy Orton and Big Show, all taking place in the Scottrade Center in St. Louis, Missouri, USA.

Here's the trailer for the DVD: http://www.cult-labs.com/clips/extreme-rules-2013-trailer 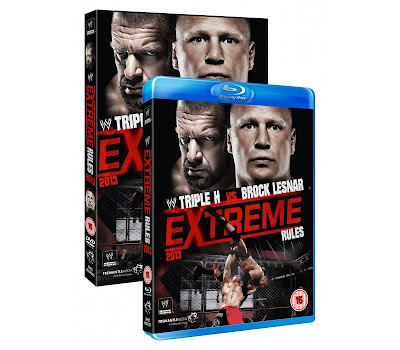 
Extreme Rules 2013 is a mixed DVD, featuring a number of good pay-per-view contests that will be a decent addition to anyone's DVD collection, whilst a few matches suffer from strange concepts and disappointing endings to continue the feuds for another month.

The main match with a disapointing ending is the WWE Championship Match between John Cena and Ryback for the WWE Championship, the match for the most part is a solid Last Man Standing match with some nice spots as the fight goes around the arena. However, it is hindered by it's ending, seeing Ryback sending both he and Cena through a lighting grid, which means they end up on some strange metal rig the other side. Unfortunately, the camera doesn't see this and neither do we as a viewer, so it's difficult to believe what we are seeing which is especially important in pro wrestling. We've seen a number of Last Man Standing matches have a similiar kind of dusty finish over the years, which for me is not how the match should be used, it needs to be there to end a heated rivalry not in an attempt to extend it.

The same fate befouls the "I Quit" match between Dolph Ziggler and Alberto Del Rio, with some shenanigans between Ricardo Rodriguez, Zeb Colter and a towel at ringside meaning Del Rio is proclaimed the winner of the matches. This is where things get strange, with another referee coming out and we eventually go to a video replay. Now, having this reply brings WWE into some dangerous territory, because you can't have a replay in ever match, because the heels will never win and the show would be incredibly boring. The eventual ending is a lot better and I'm not quite sure why they didn't simply run with this one in the first place.

The headline contest between Brock Lesnar and Triple H is good conclusion to their rivalry with a good story to tell that unfurls well as the match goes on. The involvement of Paul Heyman works well and allows for a nice pop for Triple H when he delivers the Pedigree. In my opinion this is the best match of the trilogy that began at Summerslam 2012 and continued into Wrestlemania XXIX. It makes sense for this match to finish the pay-per-view as it had to the most build up, featured two established main eventers and had the most public interest, as can be shown by Lesnar and The Game featuring on the cover of the event.

Randy Orton and Big Show also put together a good Extreme Rules match, that is helped by Orton being in his hometown of St. Louis, as the crowd are really into this one. There's some imaginative spots involving ladders and chairs and Orton even pulls out his old finisher the Punt Kick, which gave this match a bigger feel than it really deserved to have. We haven't seen much of Big Show since this match, apart from a number of Pay-per-view Pre-Shows, so it will be interesting to see how WWE decides to bring him back after a clean loss here to Orton.

Elsewhere on the show, The Shield put in a pair of good efforts, as Seth Rollins and Roman Reigns take on Team Hell No for the Tag Team Championships and Dean Ambrose challenges Kofi Kingston for the United States Championship, in the biggest night of The Shield's careers so far. Sheamus and Mark Henry have a dire Strap Match which is made even worse by a confused concept that hasn't been entirely thought through and Chris Jericho and Fandango end their feud in a decent, yet forgettable opener.

Special Features include the Pre-Show match between Cody Rhodes and The Miz, that isn't particularly awful, but then again lacks any excitement or character, simply by throwing together two wrestlers. We also get highlights of the Post-Show that featured Renee Young leading a panel that included Hall of Famer Mick Foley, then Intercontinental Champion Wade Barrett and Titus O'Neil of the Prime Time Player. It's disappointing that this has been cut down from half an hour to five minutes, as what is presented is thoughtful and fun to watch, but missing out on a number of interviews that made the piece worthwhile in the first place. The best things about the Post-Show is Renee Young almost saying Raw will be on Spike TV the next day, before correcting herself.

As WWE Pay-Per-Views goes you can do much worse than Extreme Rules 2013, with a number of big name contests and some decent matches, but if you're on a budget I'd recommend waiting for Payback that's out next month, which is much better showing.

My Top Three Matches From Payback 2013.