WWE Live in the UK: April 2013 is a two-disc presenting footage from WWE's two television tapings at the O2 Arena in London, England. The disc includes full episodes Raw, Smackdown, Main Event, Superstars and Saturday Morning Slam and is available now from www.wwedvd.co.uk, priced at £12.99

Here's a sneak peak at the DVD: http://www.cult-labs.com/clips/live-in-the-uk-april-2013-r-truth 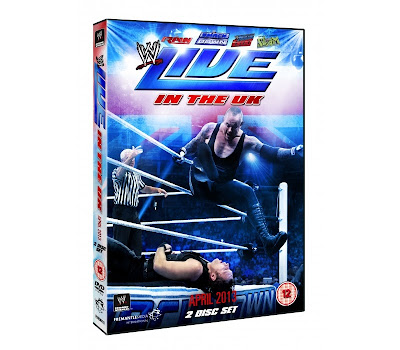 The Shield Arrive in London

Brodus Clay with Tensai & The Funkadactyls vs. Damien Sandow with Cody Rhodes

Raw Recap: Dolph Ziggler Cashes in Money in the Bank

Tensai with Brodus Clay & The Funkadactyls vs. Cody Rhodes with Damien Sandow

Hall of Famer Mick Foley Makes His Way to the Ring.

The Great Khali with Hornswoggle & Natalya vs. Mark Henry

The Shield Vow to Beat Undertaker

Undertaker vs. Dean Ambrose with The Shield.

Mr. Socko and The Cobra make a Match.

Hall of Famer Mick Foley and Sheamus Do a Duet.


Usually, I'd spend this review talking about how WWE are simply attempting to gain some extra money out of UK fans, by featuring simply regular episodes of Raw, Smackdown and their other weekly television programs that just so happened to be filmed in the O2 Arena in London. WWE doesn't do this in any other markets and it's rare that you get full episodes of TV on DVD. However, their is a notable draw to this DVD set, as their was a notable draw to the two television tapings, that being a rare appearance from The Undertaker.

Undertaker competes in two good contests, firstly teaming with then Tag Team Champion Team Hell No to take on The Shield on Raw and then in singles action against Dean Ambrose on Smackdown. As of writing, these remain 'Takers final performances on WWE television and therefore bring a certain edge to this DVD set. Whilst we know Undertaker will most likely return eventually around Wrestlemania time, I'd be surprised if he had another match on Raw, and even more surprised if he turned up on Smackdown again, and certainly wouldn't expect those matches to be of the quality of the two he has on this set.

Alongside Undertaker, there was also a number of appearances from WWE veterans like Triple H, Hall of Famer Mick Foley, Paul Heyman and Chris Jericho which again makes these shows feel important as you watch through it. It's a shame however that there is no appearance from Brock Lesnar who was entrenched in feud with Triple H at the time, but obviously Lesnar didn't want to travel to London to show his face, as it really would've added some extra bit to the opening segment of Raw between Triple H and Paul Heyman.

Whilst watching through the set, it's clear that both the Raw and Smackdown shows were working with a smaller roster than they were used to, with a number of superstars pulling double duty, or in the case of Mark Henry quintuple duty as he works no less than five matches, across both Main Event and Smackdown. Tons of Funk and Team Rhodes Scholars also turn up twice on Raw, in what is clearly an attempt to fill time but does become a bit tedious as there is no real difference between the two matches.

One thing that bugs me on this DVD is the inclusion of break, yet the commentators talking about what happened on the WWE App during the break. Surely, having the WWE App allows them to put the footage onto the DVD and thus allowing the home viewer to see complete matches? It would also have been nice for WWE to include footage of other events that happened in side the arena, such as Daniel Bryan's attempt to hug The Undertaker and Triple H and New Age Outlaws coming out to take down The Shield and Fandango closing the show on Smackdown, if only as DVD extras.

The other notable thing I noticed on this set, was how WWE edits their shows and removes and adds crowd reaction, almost at whim. A section of the fantastic Chris Jericho vs. Dolph Ziggler is missing and even without prior knowledge of what occured in the O2 Arena, it's clear that something has been taken out. Some of the crowds chants have been removed, which at times is frustrating as the chants were pretty imaginiative at time such as a "We Want Chyna" chant that occured during the Divas Tag Team Match on Superstars. Reactions have been added onto Smackdown, where the crowd was actually pretty quiet for most of the show, apart from the odd attempt at some random chanting during matches like Mark Henry vs. Randy Orton and Sheamus vs. Big Show.

The other thing that is frustrating with this set is the amount of recaps that are left intact, despite the recaps being about shows that are also included on the DVD set. The confrontation between Mick Foley and Ryback is featured four times, and it wasn't even that great a segment to start with. You'll find yourself skipping through these, when the time could have been better used for extras.

There are some hidden gems on the set, as well as a chance to see how much WWE has changed in a mere three months. A match that stands out for me is the Superstars contest, between Jimmy Uso and Michael McGillicutty. This is one of the matches that benefits from being on television and not in the arena, as the crowd were pretty cold for this one due to the lack of television exposure for either man on television at the time. However, watching the match on the big screen and close up, allows you to see the talents that each man holds, instead of getting dragged in to Fandangoing with the rest of the crowd. It's also strange to see McGillicutty still under this gimmick, before he became a Paul Heyman guy and changed his name to Curtis Axel. Can you imagine Curtis Axel losing to Jimmy Uso today? Neither can I!

The only special feature present on this disc is a match from Rebellion 2001 from Manchester, England, with Chris Jericho defending the WCW Championship against Kurt Angle. It's pretty good match, as you'd expect from Jericho and Angle, but isn't really up there with some of their other encounters. It's always nice to see other matches that were filmed in the UK on these sets, but it's a shame we only get one on this one.

In closing this is a pretty enjoyable set with a number of good matches, but could do with a little bit more effort from everyone involved to really make it into the must-have set that it could become every six months.


My Tops Three Matches from this Live in the UK: April 2013