This week’s Main Event was the first episode in a while that didn’t feature a top notch main event, with Sheamus and Jack Swagger not quite being able to live up to previous weeks. Main Event seems to be there to give wrestlers a chance to show what they can do when given the time and the spotlight, and this did happen elsewhere in the show with Damien Sandow, Sin Cara, Justin Gabriel and Drew McIntyre all getting more time than they would usually be afford on Raw or Smackdown, but with the Main Event of the show focusing on two wrestlers whose stars seem to be fading as of current, it didn’t feel like the show lived up to its potential this time round.

Before the match, we got another promo from Zeb Colter. Now, when these promos started I was a big fan of Colter and his character, but having him perform one before every single one of Jack Swagger and Antonio Cesaro’s match is beginning to get a little tiresome. Zeb seems to go over the same ground time and time again, and has resorted more and more to simply attempting to garner cheap heat, which is a shame for a character that showed so much promise just six months ago. I simply find myself zoning out every time Zeb begins to speak, as I’ve heard it all before, and rarely does it bring anything that is going to be particularly relevant to the match I’m about to watch.

The match in question here pitted Colter’s charge Jack Swagger, against The Celtic Warrior, Sheamus. Both were involved in losing efforts on Raw, against Daniel Bryan and Alberto Del Rio respectively, so neither could really afford another defeat here if they wanted to stay within the upper echelon of talent in WWE. Similar to Sheamus’ match with Del Rio on Raw, this bout focussed heavily on Sheamus’ injured leg, with Swagger performing a number of attacks and holds in it, including wrapping the leg around the ringpost, throughout the match. In this sense the match told a decent story, with each time Sheamus attempted a comeback his leg would let him down allowing Swagger to get back in control. However, it was stretched out to almost tedium, with the match lasting over fifteen minutes of television time, about five or six more than it actually needed.

The ending saw Sheamus fight back, as Swagger was attempting to wrap his leg around the ring post, Sheamus pulled Swagger into the post. When Swagger recovered and got back into the ring, he received a swift Brogue Kick at Sheamus picked up the victory. A solid ending to a long contest for these two, with Sheamus being the logical winner, as it seems like they have absolutely nothing for Swagger right now, and only vaguely more for Sheamus. I found this match difficult to get into, because it was pretty slow throughout, with nothing really to latch onto, whilst there was strong moments, like Swagger taking an impressive back body drop to the outside, they were few and far between in this stretched out bout.

Sheamus and Swagger both seem to be in career ruts at the moment, with neither really going anywhere. Swagger’s may be self-inflicted with his extracurricular activity certainly causing harm to his status post-Wrestlemania and I wouldn’t expect him to be moving any higher up the roster than this, at the moment. The best he can hope for is to be teamed with Antonio Cesaro for a run at the Tag Team Championship, but I’d much rather see Cesaro break out on his own, than to stuck with someone who WWE clearly is no longer high on (pardon the pun) Sheamus on the other hand is simply in the position because his character has failed to evolve and is no ultra-stale, we’ve seen these routines before, we’ve heard the Irish Jokes, Sheamus can truly go in the ring when he has the opportunity but without a believable and coherent character we won’t see him move back to former glories any time soon. 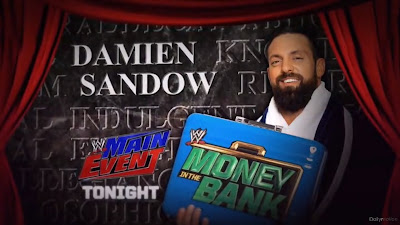 Elsewhere, World Heavyweight Championship Mr. Money in the Bank Damien Sandow was in action against Justin Gabriel. Sandow also got the pre-match promo treatment, and did a pretty good job of it.  Sandow’s tone draws you in to what he has to say, even if what he has to say is insulting you, and the Money in the Bank briefcase has given him a new set of material to play with, keeping his spiel fresh. Justin Gabriel was a good opponent to have Sandow face here, as Gabriel of putting on good short matches and does a lot to help his opponent, whilst also being able to produce those high-flying moments that “Wow” a live crowd.

The match was a decent television bout with Damien Sandow getting the majority of the offence in, with Gabriel working mainly in shorts bursts of high octane action, before being grounded once again by Sandow. The action wasn’t exactly enthralling, and I’d probably say I was a little disappointed, given the time that Sandow and Gabriel were afforded the could have done a lot better, with the sections with Sandow in control being very slow and mainly involving rest holds. The end saw Gabriel miss a Stinger Splash in the corner, allowing Sandow to hit another new finishing move, a Full Nelson Slam for the pinfall victory. I’m not sure why WWE insists on give Sandow new finishing moves, we’ve seen him use a version of Matt Hardy’s Side Effect recently, when his Terminus Neckbreaker was a solid move in the first place.

The other match of the evening saw Sin Cara face off against Ayr’s Drew McIntyre, who was accompanied by 3MB teammates Heath Slater and Jinder Mahal. For a short three minutes match, this was an entertaining contest, with a number of decent spots, and Sin Cara even managed to show some personality as he mimicked Drew! Sin Cara was actually pretty crisp throughout the bout, hit his moves with a precision that has become rare during his run with WWE. Sin Cara ended up picking up the victory, with a Hurricanrana Driver, that didn’t quite look right. I know that’s how the move is supposed to look, but it looks like a botch. Either way the contest was a solid television contest with plenty to keep the attention off the viewer, whether it was the antics of 3MB, the jumping acrobatics of Sin Cara or the fact that Drew McIntyre used to be Vince McMahon’s Chosen One.

1. WWE don't seem to have any plans for Sheamus or Jack Swagger.

2. Even Damien Sandow is capable of phoning in what should be a straight forward contest.

3. Josh Matthews reads the same facts about a wrestler in every match they are in.
Posted by Unknown at 22:40