Main Event seems to have hit it’s stride at the moment, seemingly stumbling upon a format that should work out well for WWE in the long. Pitting a more experience main event calibre star against someone who has been untested in that role, whilst also give them more time than they would usually receive on WWE programming certainly feels like a good move in terms of assessing if a talent is ready for the big time, even if the result is a little predictable.

Taking the format mentioned above this weeks Main Event pitted the experienced veteran Christian against the younger Damien Sandow. It would seem that WWE are still high on Sandow, following his short feud with Sheamus, with Sandow going through a number of awful segments but still managing to hold his own. Christian for me should be occupying a similar role to that of Chris Jericho, by the way of helping to get some of the younger talent over with the audience, Christian is capable of putting on superb matches with numerous different talents and making them look good in the process, however WWE has to be careful to make sure Christian gets enough wins elsewhere to make beating him a big deal.

Before the match, Damien Sandow cut a promo as he walked down to the ring. It was another impressive piece of mic time for Sandow who continues to improve every time he’s handed the microphone. He worked the crowd well, as well as insulting Christian, in terms of pre-match promo there wasn’t much else to do. Also given some time with a microphone was Cody Rhodes who was on commentary for the whole show. This seems like a good idea for me, as Rhodes’ promo ability is not the strongest part of his game, however he impressed me all night long as a commentator. He managed to stay neutral for the most part, even when Sandow was in the ring, whilst talking up the competitors in the ring, as well as any ongoing storylines he needed to mention. A very fine display from the Essense of Mustachioed Magnificence (Funny nickname, can’t see it on the Wrestlemania Marquee though)

The match was another good technical contest with some good wrestling throughout. Christian controlled the early going managing to outsmart Sandow a number of times, which was the main story that ran through the match, Sandow attempting to use his intellect but Christian coming out on top. Sandow eventually did gain some control and did look good in this role wearing down Christian with rest holds, before hitting a number of signature moves such as the Cubito Aquette. My only problem with this part of the match was it was a little too slow with an over reliance on the rest holds and whilst Christian’s selling was good throughout, it felt like this section could really have used a little more going on.

The latter stages of the match certainly picked up the pace after a double clothesline spot that swung the momentum in Christian’s favour. With Sandow able to kick out of a number of Christian’s signature moves in what was more or less a repeated barrage, really allowed Sandow to look like a threat to the veteran and certainly helped build him further, as a future main eventer. The ending saw Sandow reverse a Killswitch in an Edgecution for a near fall, in what was a nice addition of psychology to the match. Christian eventually managed to hit the Killswitch after using the rope to daze Sandow in a move we’ve a few times from Christian since his return. It was a nice ending and giving Christian the victory made sense here to keep him looking like an “All-Star” heading into Money in the Bank, whilst also keeping Sandow looking strong from a competitive contest. Personally I think Sandow has the better chances of leaving WWE’s next pay-per-view with a briefcase than Christian. 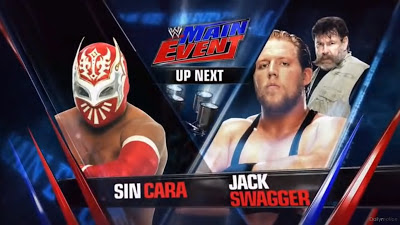 Elsewhere Jack Swagger had his first match since his return on Monday’s Raw against Sin Cara. Before the contest Zeb Colter cut another promo explaining his views on America. This was a much better promo than the one he cut on Raw this week as it had a much more focused feel and stuck to the topic, whilst helping to push Colter’s refocused gimmick. Swagger as usual sticks to his three word catchphrase “We the people”, which works for Swagger as he was never that great a talker, hampered with a bad lisp to boot.

The match between the two was a surprise for me. In as far as Sin Cara was pretty slick in the ring, whilst Swagger seemed uncomfortable being back in the squared circle. Surely after only a few weeks off, there should be no ring rust for Swagger. Swagger dominated the match with a number of power moves, with Sin Cara only getting rare blasts of offense. There was a nice spot with Sin Cara barely making a ten count, which really worked for me as Sin Cara was made out to be the underdog and I think the character finally found it’s niche. If WWE marketed Sin Cara that way, it would certainly help him make his way up the card. Swagger eventually got the after catching Sin Cara awkwardly and hitting a Gutwrench Powerbomb and locking in the Patriot Lock for the submission victory. It would have been a good ending if Swagger had done any work on Sin Cara’s ankle prior to the lock.

Big E Langston was also in action in what was essentially a squash match against Curt Hawkins. Hawkins attempted to use his pace to get one over on Langston but Langston’s power game was showcased well through, with Big E hitting a number of now signature moves and picking up the win with the Big Ending. Langston held the pin for a long time and I was half expecting him to count to five like he does in NXT, but alas it didn’t happen. Big E seems in a bit of a limbo at the moment, we haven’t seen much of him and Dolph Ziggler together lately, and whilst it seems AJ Lee is continuing her involvement, it feels a little like WWE doesn’t know where to fit Langston into things at the moment. Curt Hawkins is another rarely used talent that deserves a lot better from WWE, he’s capable of some really good matches and is a steady hand on the microphone, if WWE has nothing specific for him why not team him up with old partner Zack Ryder and help bolster the tag team division at the same time?

What have I learnt from this week's Main Event?

1. Damien Sandow could be in store for a major push in WWE.

2. Sin Cara has improved a lot in his latest run and in an underdog type role may have found a niche.

3. Cody Rhodes is a better commentator than Michael Cole.
Posted by Unknown at 15:34