NXT has definitely found it’s feet again, and this might have been the best episode of the show to date. Every match gave you a reason to watch, the seeds were planted for future rivalries and we not only got to see NXT Commissioner Dusty Rhodes, but the Nature Boy himself Ric Flair. 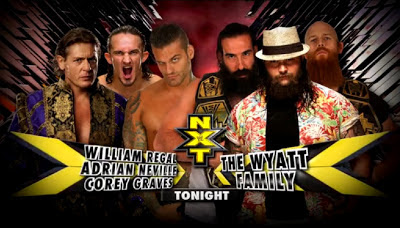 For me, this match felt similar in build to a number of The Shield’s high profile tag team matches on Raw and various pay-per-views in the last six months. With somewhat of an NXT dream team being built to combat them, even recruiting a wily veteran in the form of William Regal. The build up to the match featured a good backstage interview from Renee Young with William Regal, Adrian Neville and Corey Graves. Each man got there turn, with Neville going first. He seems to have taken my advice from last week, as he spoke a lot slower in this promo and therefore it was a lot easier to understand. In fact when delivered like this the Geordie accent actually helped to deliver a certain intensity to what Neville had to say about the Wyatt Family. Graves also did a good job with what he had to say, letting people know he’d do his talking in the ring. But it was Regal who stole the show for me, masterfully switching between an impression of Adrian Neville and a delivering a serious message to The Wyatt Family, so times the old ones are still the best.

As The Wyatt Family headed to the ring, Bray Wyatt delivered a signature, chilling promo about how this match would be a mistake for Regal, Neville and Graves. Wyatt seems to have a hypnotising quality to his voice, that coupled with the creep music, makes sure that when Wyatt is talking your listening closesly. The match started with the face team getting the upperhand, with Regal using his old dirty tactics, distracting the referee whilst Neville kicked Eric Rowan in the face, which was well worked and lapped up by the NXT Arena. We soon settled into a regular pattern with Adrian Neville being the focus of The Wyatt’s attack. What worked so well here for me, was the amount of time Neville was trying to reach for the tag, with Regal and Graves doing a good job of making it feel even more important. Each time Neville made it closer to his tag team partners you wanted him to make the tag even more, with his selling ability whilst fighting underneath really help push the match along.

With Neville eventually reaching Regal for the hot tag, we saw a frenzy of offense from the Staffordshire born veteran, taking down Luke Harper with a knee trembler for a near fall, only thwarted by Eric Rowan making the save. Straight after we saw the breakdown of the match, with Graves and Rowan battling out of the ring, and Neville hitting a beautiful corkscrew plancha taking out both me. With Regal left in a two on one situation, Bray Wyatt got the tag and hit Sister Abigail for the pinfall victory. The ending worked well for me with pace really lifting as we headed towards and ending and having Regal take the pin keeps Graves and Neville looking strong heading into their Tag Team Title contest with Harper and Rowan.

With The Wyatt Family debuting on Raw last Monday, it would have to be suggested that it is very likely they will be dropping the NXT Tag Team Titles in the near future, whether to Corey Graves and Adrian Neville or another pairing. How many appearance will the Family have left in the NXT Arena? Probably only a handful, we still see a number of main roster superstars on a regular basis, but with The Wyatt Family surely heading into a big summer angle, they might not have the time to return to Full Sail. Another question for me here is, Was this William Regal’s last match? Personally I wouldn’t think and I’m sure Regal will find another opponent he wants to face and teach in the future, I’m also pretty sure we will see at least on more match between he and Kassius Ohno.

In another big match on NXT this week, Sami Zayn faced off against Leo Kruger. This stemed from the end of las weeks show where Zayn made the save for NXT Champion Bo Dallas against Kruger and Antonio Cesaro. I have to say I haven’t been too impressed with Leo Kruger during his recent run, but I think that’s mainly due to the fact he hadn’t faced an opponent the calibre of Zayn and simply phoned the match in. This one started slowly and didn’t look to be heading anywehere for sometime, but I stuck with it and Kruger and Zayn produced one of the best singles matches in NXT. With near fall after near and some good in ring psycology this match really built into some what of an epic.

Kruger spent a lot of the match focusing on Zayn’s arm, supposedly in an attempt to soften it up for the GC3 submission hold he’s been using lately. Zayn’s speed and quickness was worked into the match with this giving his best opporutnities of winning for most of the match. There was a clever spot where Zayn couldn’t lift Kruger first time, but eventually lifted him up for a spin out powerbomb for a near fall. The match was littered with near falls for Kruger, which really allowed the crowd to get behind Zayn willing him on as he fought against the adversity. After a superplex from Kruger however, followed by sending Zayn into the ring post arm first, Kruger locked on the GC3 for an impressive submission victory. As announced later in the show by Dusty Rhodes, these two will be joined next week by Antonio Cesaro, with the winner getting a shot at Bo Dallas’ NXT Championship.

The Semi-Finals of NXT Women’s Championship Tournament concluded on this episode as Emma faced Summer Rae. In the quarter finals, Emma had put away Aksana, whilst Summer Rae defeated Sasha Banks. This was another solid outing for both Rae and Emma who continue to impress me every time they step into the ring. Emma’s gimmick is extremely over in the NXT arena, and it will be interesting to  see if it can migrate to a larger scale at some point. Rae used her long legs to keep Emma in an arm bar for some time, with Brad Maddox doing a good job of letting us know the dynamic of the match on commentary. With Emma fighting back, we got a nice roll up sequence where it seemed like either Diva could pick up the win, with Emma eventually coming out on top for the upset victory. With Summer attacking Emma after the match, other tournament finalist and long time Summer Rae rival Paige came out to make the save. I had been hoping we’d see one last match between Paige and Summer Rae for the final, however I’m intrigued by how the dynamic of Emma and Paige will work out when they face each other in the final.

Mason Ryan was also in action, this time in a Handicap Match, agains Enzo Amore and Colin Cassady. Amore is very interesting to listen to on the microphone and certainly has that mad cap ability that just draws you into what he is saying, as he set up the match due to Ryan’s “cheap shot” on him in the previous episode. As handicap matches go this was actually pretty well worked, with Ryan able to show of his power by dominating two men for a period, whilst the cunning Amore laying wait to trip Ryan as he went for a powerslam on Big Cass to give his team the victory. Obviously, there’s going to be repercussions from this is the coming weeks and it will be interesting to see who eventually comes out on top.

Also, we got the return of Ric Flair to WWE television! With Dusty Rhodes talking to Bayley about her match in the NXT Women’s Championship Tournament a few weeks ago, Flair turned up with his daughter Charlotte. With Charlotte supposed to debuting next week, Bayley offered herself forward to face her, before asking Flair to do the “Woo” he eventually obliged. I actually really like Bayley’s character, the only way I can describe it is like a female Eugene, but more cute and naïve than mentally challenge. It’s a character that could really connect certain sections of the “WWE Universe” and I can see her becoming quite popular if she continues to work hard in NXT.

What have I learned from this week's NXT?

1. William Regal is still one of the bes in the business.

2. Leo Kruger can go in the ring, when challenged properly.

3. Brad Maddox is a damn good commentator but he ain't no Man's Man.
Posted by Unknown at 23:53