It was another big week in the history of NXT, with the Tag Team Championships on the line in the main event, as well as the crowning of a brand new number one contender for Bo Dallas’ NXT Championship. To add to the important feeling of the night, we also got appearances from Hall of Famer Ric Flair, and main roster wrestlers Sheamus and Antonio Cesaro throughout the night. 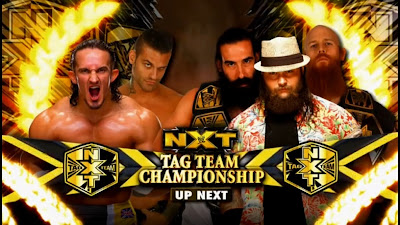 It’s been a busy week for the Wyatt Family, turning up on Raw to attack R-Truth, before taking out 3MB and Justin Gabriel on Main Event, as they continued to send messages to Kane in the build up to a possible contest at Summerslam. Over in the alternative universe of NXT, The Wyatt Family have been feuding with Adrian Neville & Corey Graves for sometime now, with The Wyatt Family taking out Neville’s former tag team partner Oliver Grey and interfering in a number of Corey Graves’ matches, with all the matches we’ve seen with these two versus The Wyatt’s in varations combinations involving the likes Bo Dallas, Kassius Ohno and William Regal, it seemed this match could very well be the last of the feud that has built well to this over the last few months. In the build up to the contest, The Wyatt Family attacked Sheamus during a backstage interview about Sheamus’ match next week, leaving him lying.

In terms of the story being told, the match was nothing much out of the ordinary, with The Wyatts dominating Corey Graves for most of the opening section. Rowan and Harper continue to look impressive in the natural big man tandem role, with a number of nice double team moves added to their arsenal, it only helps to add variety of the match which is needed when telling a basic story like this one. Corey Graves’ selling has also improved in recent weeks, at first I questioned how Graves would transfer into a face role on NXT, as seeming like a natural heel on the earlier episodes of the new format, however coupled with his great rallying promos, his stronger selling ability has really turned him into a fan favourite, which was needed here for Graves to really work the crowd up in anticipation of the hot tag.

The moment when Graves managed to make the tag to Neville, after Harper had missed a running big boot in the corner, was made ten times better by Neville really reaching out for the tag, making it seem of the upmost importance that the tag be made, as Graves did a good job of edging towards his corner. William Regal also did a fantastic job on commentary in really building up the moment, why Regal isn’t on regular WWE programming I’ll never know. After some fantastic high-flying action from Neville, including a great hurricanrana from the apron to the floor on Luke Harper, and a top rope springboard moonsault onto both of this opponents, things swung into the favour of the challengers. That is until Bray Wyatt got involved pushing Neville off the top rope, for a near fall for his family. This brought out Sheamus in a pay off of the segment we saw earlier, as Sheamus took out Wyatt sending him into the steel steps. With Graves taking out Rowan’s knee, Neville headed to the top rope, hitting Red Arrow to win his team the NXT Tag Team Championships. It was a good ending and a logical one with The Wyatt’s now competing on the main roster WWE shows, and having Sheamus come down to even the odds, elevated the match by association.

I’m not sure how many appearances the Wyatt Family have left on NXT, so I’m enjoying their run on the show while it lasts. It’s been an enjoyable run for the trio and I hope they can continue to relate this success to the rest of the WWE, because as a group they have a lot of potential. I see Neville and Graves, as almost placeholder champions however, yes both men are extremely talented in differing ways, but I see both guys having separate careers, rather than continuing as this tag team. It will be interesting to see who steps up to challenge Neville & Graves, as NXT is currently pretty bare on tag team combinations.

Elsewhere on NXT, there was a triple threat match to decide the new number one contender for Bo Dallas’ NXT Championship, featuring Sami Zayn, Antonio Cesaro and Leo Kruger. The story has built well heading into this one, with Cesaro and Zayn having a long running series, and Kruger’s involvement with Dallas interweaving heading into the triple threat. The match as well as similar well built and well paced, with solid action throughout that involved all three of the competitors involved for an optimum amount of time. The three men meshed together well, which can be a problem within triple threat matches, with each man bringing a new element to the contest. Sami Zayn brought his high flying skills to match, hitting a nice running senton over the top rope to Cesaro and Kruger. Whilst Cesaro brought a technically sound power game to the proceedings, and Kruger bringing some nice character work, as he remains something of an unknown entity on NXT.

The highlight of the match for me, saw Cesaro german suplex both Kruger and Zayn at the same time, it was an impressive moment that was reminiscent of Kurt Angle in the way it was delivered. The ending saw some more good work between Zayn and Cesaro, with Cesaro eventually hitting the Neutralizer, only for Leo Kruger to run in and steal the victory, becoming Number One Contender for the NXT Championship in the process. It was a good ending, that built on Kruger’s character as a former poacher, as he poached the victory off Cesaro, whilst also leaving it open for another Cesaro and Zayn match in the future. However, I’m not quite sure Kruger is the ideal opponent to face Bo Dallas, who simply can not get over with the NXT crowd, therefore surely have Dallas defend against a face, before eventually turning on them would have been the better option here.

Dallas himself was in action later in the night, against Scott Dawson who was accompanied by his manager Sylvester LeFort, who cut a good pre-match promo hying up Dawson for the match. It wasn’t a particularly great contest, with Dallas looking increasingly sloppy in the ring with some poor looking dropkicks and an awkward bulldog. Dallas simply isn’t ready to be competing at this level, and whilst Dawson did a good job working over Dallas, it doesn’t really matter when the crowd doesn’t like the guy you’re beating down. Dallas picked up a fairly speedy victory after a comeback, with his belly to belly suplex finish, which still doesn’t look anything like a finishing move. After the match, Leo Kruger came out and took Dallas, finishing him off with Kruger End. The crowd confirmed my earlier thoughts about the decision to have Kruger named number one contenders by chanting “Thank You Kruger”.

Ric Flair made a second consecutive appearance on NXT this week, to accompany his daughter Charlotte to the ring for her first match on NXT against Bayley. In terms of looks, Charlotte looks like she might have just wandered off the set of ITV’s Gladiators, with a strongly muscular physique, much more so than any of the Divas on the current roster, she also looks incredibly tall. I was actually pretty surprised by the match, as I expected to see Charlotte look a little awkward in the ring (she might be related to the Naith, but so was David Flair) but she appeared calm and athletic throughout with a number of interesting moves to boot. Being up against Bayley also helped as the two women’s styles fitted together well, and Bayley’s character is always a joy to watch. After Charlotte won the contest with a forward somersault cutter, she celebrated in the ring with her father, performing his signature strut. Whilst Charlotte looked pretty good for her first match, one thing that will need to be worked on is character, as I’m not sure how far she will get on the gimmick of being Ric Flair’s daughter.

What have I learnt from this week's NXT?

1. You can still make a well-trodden story feel exciting and fresh, given the right combination of action and character, as seen in the Tag Team Championship contest.

2. Leo Kruger was the wrong choice for Number One Contender, not because he isn't ready, but because he is a poor fit for Bo Dallas at this time.

3. William Regal is the best commentator around, bar none.
Posted by Unknown at 02:03