In a week on NXT that included appearances from Triple H, Sheamus, Antonio Cesaro, Zeb Colter and The Wyatt Family, it tells you something that I’ve chosen to run with Paige vs. Emma as my main feature of this review. Whilst the rest of the show was strong, even with a number of enhancement contests, both Paige and Emma stole the show in their quest to become the first ever NXT Women’s Champion. 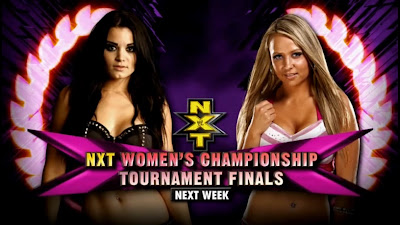 Heading into the final we’d seen Emma pick up victories over Aksana and Summer Rae, whilst Paige had been victorious over Tamina Snuka and Alicia Fox, and after three out of the four of those contests had been exciting women’s contests I had a inkling that we might have been in for something special here, in the opening match of this week’s NXT. The dynamic between the two worked well, as shown in pre-match comments from Paige and Emma, as whilst both were playing faces and were major fan favourites in the Full Sail Arena, both characters had completely different outlooks when it came to the ring, with Paige being the no-nonsense fighter, whilst Emma represented the dancing, showy Diva, making a nice contrast between the two.

With no clear heel within the match, it allowed both women to play with the dynamic of the contest, each spending lengthy periods in control with some nice submissions holds and transitions, as the match got warmed up. Unlike a lot of WWE women’s matches, the moves looked crisp and precise for the entirety of the contest, and it was clear throughout what the women were trying to do. The match developed well as it went along adding new layers of competition, made even more convincing as the bout was visibly taking its toll on Paige and Emma. A highlight for me was Paige catching Emma’s leg in the corner and managing to transition beautifully into her RamPaige submission hold, with Emma doing a good job of selling the hold, it looked like it could be over until Emma managed to get free. Another strong moment, saw Emma hit a superplex on Paige. How often in WWE women’s match, do you see a superplex? It wasn’t the best looking superplex you’ve ever seen, but at this point in the match, that actually helped to tell the story.

The ending saw Emma attempt to lift Paige of the floor, only to receive a quick kick to the gut, followed by a Superkick and eventually finished off with the Paige Turner, to give Paige the pinfall victory and allowing her to become the first NXT Women’s Champion. It was a great ending that really helped to show the guts and determination of Paige, as she fought back to pick up the victory, whilst also allowing Emma to stay looking strong as she took one of hell of beating out of nowhere to end up losing the bout. Personally, this was the best mainstream women’s match that I’ve seen this year, combining the hard-hitting nature of Gail Kim vs. Taryn Terrell and the storytelling of AJ Lee vs. Kaitlyn to create a superb contest that will be remembered for a long time amongst those of us who watch NXT.

After the match, a number of the NXT women’s roster made their way out to the ring to celebrate with Paige, before WWE COO Triple H made a surprise appearance to raise Paige’s arm, in what was a clearly emotional moment for the twenty year old from Norwich, Norfolk. Whilst, it was sort of obvious from the outset of the tournament that Paige would be winning the NXT Women’s Championship, it was a nice idea that was well executed, allowing Paige to pick up some big victories and come out looking better by the end of the tournament than she did at the start, and certainly better than if she’d have simply won a battle royal. I’m also curious what’s next for Emma, surely after that contest, she’ll be getting a rematch on NXT soon, but will we see a new side to Emma, maybe even a heel turn after seeing all the Divas celebrate with Paige? Either way, right now this week’s NXT belongs to that girl from Norwich, Paige.

Elsewhere, the good action continued as Sheamus took on Luke Harper of The Wyatt Family, who of course had fellow family member Bray Wyatt and Erick Rowan at ringside. This match was set last week, after The Wyatts had attack Sheamus back stage during an interview, with Sheamus returning the favour in the main event, taking out Bray Wyatt and allowing Adrian Neville and Corey Graves to win the NXT Tag Team Championships from Harper and Rowan. This was far and above the best contest that Sheamus had on Wednesday evening, after his poor showing against Jack Swagger on Main Event, this bout showed that when tasked, Sheamus can deliver the goods, as well as providing the WWE audience a first chance to see what Luke Harper can do in singles action.

What I liked about this match so much it’s almost complete change of pace to what we’ve seen in WWE recently, yes we’ve seen some fantastic technical matches from the likes of Daniel Bryan and CM Punk, but it’s been a while since we’ve seen a good old fashioned brawl like was seen here. This is definitely the style that Sheamus is most effective in, and Luke Harper is more than familiar with this kind of wrestling after a lengthy stint on the Indy circuit as Brodie Lee. After some fantastic back and forth fighting, Sheamus eventually picked up a pinfall victory, following White Noise and a Brogue Kick. If only WWE would utilise this side of Sheamus more often, he would certainly be much more over with the audience than he currently is. After this bout, it feels like the Wyatt Family could be over full time on NXT for now, which can only be good news for Raw and Smackdown.

Antonio Cesaro was back on NXT this week, this time accompanied by manager Zeb Colter, as Zeb cut a decent promo on Cesaro’s long time rival, Sami Zayn. It was long and rambling, but this seemed to work well for Zeb as it molded into the idea that he was actually completely off his rocker, and the bizarre statements he’d make throughout about the legality of Zayn being in the country really helped to add to this, I do hope this was the effect that WWE was going for! We even got a reference to Zayn’s old Indy character El Generico, with Colter talking about Zayn wearing a mask in his past and we all know Zeb hates masks. The Real Americans said they wanted to find out who Sami Zayn really was, here’s hoping El Generico will be heading to NXT soon, but I won’t hold my breath.

The new version of The Ascension made their tag team debut this week, against the pairing of Mickey Keegan and Aiden English in an impressive squash match. Conor O’Brian and Rick Victor got in every ounce of action, showing a good combination of speed, power and teamwork to eventually pick up a victory after a Spinning Low Kick/Spinning Jumping Elbow combination. Personally, I think The Ascension as a tag team have a lot more potential than either man on their own, as as a team they cover up each other’s short comings, however it will be interesting to see how they fare in longer matches.


There was also the NXT in ring debut of Tyler Breeze. I’m not quite sold on Breeze’s gimmick at the moment, which is that of a male model who continually takes pictures of himself on his phone. It was used a little bit too much before the start of the match, when we’d got the idea about two minutes earlier. In the ring Breeze looked fairly competent in his enhancement match with Angelo Dawkins, after Dawkins got tired of Breeze taking photos of himself. Breeze quickly gained the upperhand with a number of kicks and strikes, taking time for one last picture, before finishing Dawkins off with a huge double heel kick for a pinfall victory. I think Breeze has potential in NXT, but the gimmick is definitely going to need a little more work, but that’s what NXT is for.

1. The future of WWE's Divas Division looks bright in Paige and Emma.

2. Sheamus needs to be used more like he was in NXT, on Raw and Smackdown.