It was funny episode of Smackdown this week, with a lot of regular Smackdown wrestlers on WWE’s tour of Japan, we got to see a rare appearance from CM Punk, whilst a few other superstar got a chance to have a little extra time on the show. 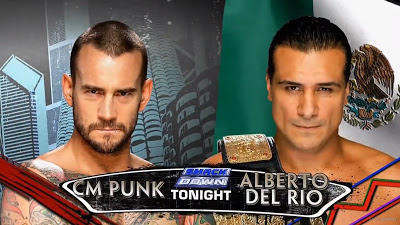 In what was billed as a “Special Appearance”, CM Punk turned up this week on Smackdown, kicking off the show with a promo about his chance in the All-Stars Money in the Bank Ladder Match at Money in the Bank, as well as involving the previous days Independence Day. Punk seems to be able to pull off a good promo with absolute ease and even though this was another good showing, at times it felt like he was phoning it in, possibly because this is Smackdown not Raw, which is a shame because some of Punk’s best work came over on the blue brand back in 2009. In an almost mirror image of the Post-Payback Raw, Alberto Del Rio came out to counter Punk’s claim of being Best in the World. Del Rio has settled back into the heel role well, himself talking about Independence Day and criticising the American people. With Punk pointing out WWE’s continuity errors, with Del Rio’s previous “Born in Mexico, Made in America” vignettes for Del Rio. An obviously confused Teddy Long wondered out to the ring and booked a one on one match for the main event.

Leading up to the match, we got a few backstage segment’s with Paul Heyman. Firstly, speaking to best friend CM Punk, attempting to get Punk to allow him to cancel the match later on, as well asking to accompany Punk to ringside for the Money in the Bank Ladder Match. Punk, of course told Heyman that he didn’t need his help anymore. Later on, we saw Heyman go to Teddy Long’s office, in an interesting twist Long said that Heyman could be at ringside for Punk vs. Del Rio later on, as a guest commentator. It would appear WWE are going with a story where Teddy Long is attempting to usurp Booker T on Smackdown, not sure why they are doing this, WWE should be making the leadership situation clearer rather than complicating it. I am however enjoying the slow build for CM Punk vs. Brock Lesnar with Heyman and Punk doing a good job of keeping the story going in Brock Lesnar’s absence.

The match was another decent technical contest between these two, although due to only less than ten minutes, wasn’t close to the match they had on Raw three weeks ago. Del Rio spent a lot of the match controlling Punk, and looked like he might have an upset victory (The World Heavyweight Champion having an upset victory is crazy) when he thwarted an elbow drop attempt from Punk with a huge Enziguiri that looked and sounded impressive. What made this match for me was that there looked to be intent behind the moves, rather than the going through the motions we’ve seen from some WWE wrestlers lately, with both men giving their all in the time they were given.

The ending of the match saw Heyman get involved as the action had spilled to the outside. With Del Rio removing the cover of the announce table, Heyman tried to reason with Del Rio, only to receive a punch from Del Rio. This caused Punk to go over the edge, with some great camera work and facial expression from Punk telling the story before it had even happened. Punk went onto assault Del Rio causing both men to get counted out. The show finished with Punk delivering a GTS to Del Rio, before checking on Heyman. It was a nice piece of development for the Punk/Heyman relationship, revealing Punk still cared for Heyman’s wellbeing and showing their friendship well, making the moment when Heyman finally turns on Punk even sweeter. I’m not sure why Del Rio needed to be involved as it did little for him here and his story with Dolph Ziggler didn’t get the spotlight it needed. I would have much rather seen a different performer get the chance to wrestle CM Punk, who would have gotten more out of the experience. 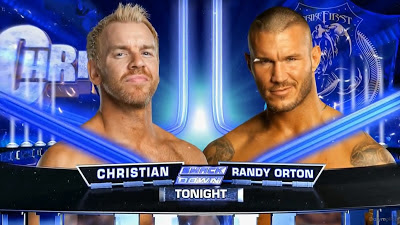 Before the match, Randy Orton and Christian were interviewed backstage by Renee Young. Both Christian and Orton talked about the past between the two, with their battles in 2011 lighting up not only Smackdown but the entire WWE. They also spoke about them both competing in the All Stars Money in the Bank Ladder match and how they each believed they were going to win. It was a pretty straight forward segment, with nothing out of the ordinary said between either, it built up the match later well making it feel important, for not only momentum but to settle the feud one last time.

The match took a while to get going with going back and forth, mainly due to face vs. face aspect of the match, with neither man wanting to spend too long on top. I understand that Orton and Christian have got a big match coming up soon, but the amount of rest holds early on in the match was a little silly. The headlocks and similar moves are a staple of Orton’s offence, even more so over the last two years, and it makes it difficult to get into his matches as you can kind of work out what’s going to happen for the majority of the contest. Orton might be bringing a little more passion back to his game lately, but he could really do with mixing it up in ring a bit more often.

The ending saw Orton building for an RKO, really working the crowd well, Christian blocked the RKO and headed to the top rope, Orton ducked whatever Christian had been planning and Christian walked into an RKO to give Christian the victory. It was a nice ending that was worked well by both men. The match here wasn’t quite as good as what we’ve seen in the past from Christian and Orton, mainly because it lacked a lot of the intent that made those matches good in the first place and felt like both Orton and Christian were holding back during the bout.

With both Orton and Christian heading into the All-Stars Money in the Bank Ladder Match on 14th July, it felt like a strange decision to give Orton the win here. Yes, Orton lost to Daniel Bryan on last weeks Raw, but Christian was the wrestler most in need of a big victory going into the match. He’s only really seen victories over lesser name competitors since his return, with his six man tag victory with The Usos over The Shield not really being capitalized upon, a win here for Christian would have allowed him to look like he was in with a chance, rather than just making up the numbers.

Best of the Rest (In the World)

Elsewhere Number One Contenders for the Tag Team Championships, The Usos faced Team Rhodes Scholars. Before the match, Damien Sandow talked about the World Heavyweight Championship Money in the Bank Ladder Match, talking about how he and Cody would not turn on each other during the match, remaining best friends. The amount of times this has been mentioned on WWE Television you have to believe that Sandow turning on Rhodes will be a focal point of the match, otherwise there would be no need to mention it, I will be extremely surprised if this doesn’t happen.

The match was a short, simple, yet enjoyable tag team contest, with Rhodes Scholars keeping an Uso (I still don’t know who is who) contained, until they went for a double back suplex with Uso escaping, before sending Rhodes to the apron where he received a Superkick, and Sandow got the same treatment in the ring. The Usos brought back a finish we saw them use earlier in their careers hitting stereo Superfly Splashes for the victory. The Shield were shown on the screen, with Rollins and Reigns have their strongest talking appearance on WWE TV, saying they weren’t shaken by the Usos win last week and they’d retain the tag titles at Money in  the Bank kick off. Dean Ambrose spoke about his involvement with Christian, as well as the World Heavyweight Championship Money in the Bank match, the idea of Ambrose holding Money in the Bank seems like a really good idea, fitting the groups character well, but I’m not quite sure WWE will give him this opportunity quite yet.

Number One Contender Dolph Ziggler was also in action this week. Before his match with 3MB’s Drew McIntyre, Ziggler had some time on the microphone. Ziggler did a pretty good job of talking about his rivalry with Alberto Del Rio, with only a few minor tweaks to his character, which is how the best turns should work, especially with Ziggler already a popular heel. Ziggler picked up a quick win over McIntyre after hitting the Zig Zag following a massive tilt-a-whirl around McIntyre. After the match, 3MB tried to attack Ziggler again only to be thwarted by him, twice. The 3MB stuff has worked for me, in terms of getting Ziggler over as a face, but it has meant that the rivalry with Alberto Del Rio has gone a bit off the boil, especially with Ziggler having no part in the main event.

Number One Contender to the Diva’s Championship Kaitlyn was also in action in a rematch from Raw against Alicia Fox. Fox dominated from the outset, but with Kaitlyn making a comeback, Diva’s Champion AJ Lee headed out to ringside. AJ skipped around the ring, causing the eventual distraction that allowed Fox to get a role up victory. Surely, a victory over a number one contender puts you into the title picture, or maybe that’s just me. AJ ran away from ringside with Kaitlyn following. Somehow AJ had shaken Kaitlyn and ran into the Bella Twins backstage, who claimed they were coming for the Diva’s Championship. I know The Bella’s have a new TV show to promote but there must be other way rather than muddying the waters of the Diva’s Championship picture, with Natalya and Alicia Fox already holding victories over the champion and number one contender. It was also teased that AJ might split boyfriend Dolph Ziggler as she as Big E Langston left without him.

Also Fandango was in action against Justin Gabriel. It was essentially a squash match, with Fandango getting pretty much all of the offence in. It was enjoyable to watch and made Fandango look good, whilst allowing Gabriel to show off his athleticism. The ending saw Fandango stop a potential dive to the outside from Gabriel with a kick to the head, before heading to the top rope for a Leg Drop. Fandango heads into the World Heavyweight Championship Money in the Bank Ladder Match, and unfortunately this match won’t do much to convince me he’s going to win the briefcase come the 14th of July.

What have I learnt from this week's episode of Smackdown?

1. Best in the World is a higher title, than World Heavyweight Champion.

3. If you say something isn't going to happen (Sandow and Rhodes turning on each other at the Money in the Bank) so often, it's pretty likely it's going to happen.
Posted by Unknown at 00:54