It's part two of this week's double header of interview's as we speak to former WWE, TNA and ROH wrestler Antonio Thomas. 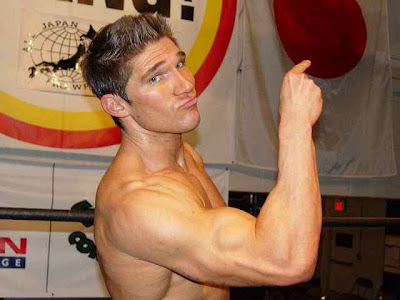 
It was a dream come true. You're working for the biggest company in the world, in the biggest arenas and against the best competition. Plus the pay is pretty good, so nothing can beat that, haha!

3. If you could face anyone from wrestling's history who would it be and why?

Without a doubt Shawn Michaels. I grew up idolizing him and to me, is the greatest in ring performer of all time. Unfortunately, we never crossed paths during my time in WWE, although he was very helpful and always willing to offer advice and critiques-to be able to work with him would truly be a dream come true.

That's a tough one, its so hard to narrow it down to just one. As a fan, the most fun I ever had watching a match was the HBK/Razor Ramon ladder match from Wrestlemania 10. From a technical perspective, the greatest match for me would be Bret/Shawn Ironman match, Tanahashi/Suzuki from last year or anything with Dory Funk vs Jack Brisco. Its hard, so many to name, but as a kid, my favorite match was Hulk Hogan vs Ultimate Warrior, haha-looking back, Hogan really took control of that match and showed that even though he's no technical wizard, he truly was a great worker.

5. Where can our readers catch you in action next and will you be making your way "across the pond" anytime soon?

Catch me at all NECW events and check the schedule at necwrestling.com, Wrestling is Art on August 10&11 (wrestlingisart.com) and then Wrestling Cares in Los Angeles on August 17 (wrestlingcares.com) and then CTWE on August 24 against two former fellow WWE superstars, Mike Mondo and Derrick Bateman. I hope so! I love working in Europe and in the UK and am a HUGE World of Sport fan, so any promoter "across the pond" interested in bringing me in for training seminars and/or bookings, please email me at ringsportprowrestling@gmail.com and hit me up on Twitter @promisethomas.

Thanks for interviewing me and hope to be "across the pond" soon!!!

Thanks to Antonio Thomas for giving us this great interview. Any UK bookers reading this, what are you doing, go and e-mail Antonio at ringsportsprowrestling@gmail.com and get him on your show...NOW!