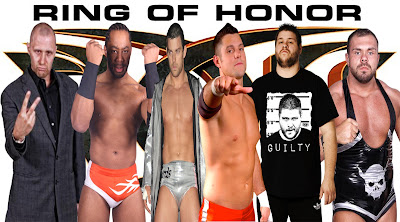 The ROH World Championship tournament finally began this week on ROH television, with Jay Lethal facing off against a returning Sonjay Dutt. This is definitely a good thing for Ring of Honor, bringing something fresh to our television screens, after the long running SCUM storyline came to a close a few weeks ago. With all tournament matches taking place on television and names like Brian Kendrick, Paul London and Karl Anderson returning to take part in the tournament we should be in for a treat, as we build toward Death Before Dishonor in September. 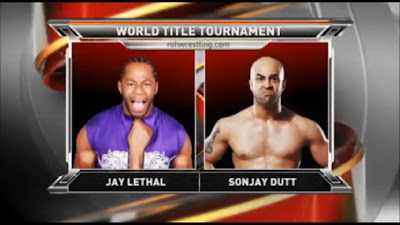 It's been a long time since we've seen Sonjay Dutt in ROH, his last appearance coming at 2010's Final Battle in a losing effort to Eddie Edwards, and seeing him return for this tournament made it feel like a big deal. With returns from Brian Kendrick, Paul London and Karl Anderson for the tournament as well, I think this was a fantastic move from ROH. Not only do you get the added interest from people looking to see their return, it elevates the tournament and the World Championship by making it look like a prize that people want to win, something that is often forgotten in the world of professional wrestling. The other interesting element in this one was the amount of history between the two men, who have been competing against and even teaming with each other since way back in 2004, mainly in TNA, but with their last televised singles bout coming almost five years ago, I was wondering if the two would connect on the level we have seem them do in the past.

Of course, they did and this bout was fantastic start to the tournament. With Dutt mainly competiting for TNA over the last two years, most recently on this week's Impact Wrestling in a losing effort to Manik, this definitely had an old school X-Division style about it, with the action coming at a fast pace, with a nice number of spots thrown in as well, starting with a good looking hurracanrana on the outside, using the apron. It was an extremely competitive bout, with the momentum swapping a number of times between the two, with the crowd split pretty much down the middle with a number of duelling chants breaking out. The highlight of the match for me was a fantastically quick section, that saw Dutt attempt a leg scissor takedown, with Lethal managing to hold him in a Tombstone Piledrive position with Dutt somehow flipping out of it, before kipping up and hitting a Tornando DDT, it certainly raised the bout up a notch and got the crowd even more involved than before.

The bout built nicely towards the finish, with a number of near falls and Lethal and Dutt being unable to hit signature moves Hail to the King and Moonsault Double Footstomp respectively. The ending saw Dutt attempt a Sonjay Cutter, which was reversed into a Tombstone Piledrive attempt from Lethal, with Dutt managing to get a roll up for a near fall. With both men recovering, Lethal managed to hit a Superkick to the back of Dutt's head, before hitting the Lethal Injection to get the pinfall victory and advance to the Quarter Final's of the tournament. It made sense for Lethal to go over here, as he is the ROH regular and the win over Dutt will give him good momentum heading into the next round, against either Adam Cole or Mark Briscoe.

This match proved once again, what a giant mistake TNA made in releasing Lethal back in 2010. Yes, the Black Machismo character only had so far to go within the company, but as Lethal has proved in ROH and across the world over the last few years, he has a lot more to offer beyond the gimmick. TNA seem to be doing a similar thing with Sonjay Dutt at the moment, with him not under contract, his appearances are too few and far between to really mean anything, and with the X Division roster looking paper thin at the moment, TNA should certainly look at tying to the Dutt back down to the company, and having him help the less experienced members of the roster to get over with the audience, similar to how we've seen WWE use Chris Jericho and Christian. If they don't, I would much prefer to see Dutt come back to Ring of Honor where he'll be afforded more time in his matches and really be able to shine. 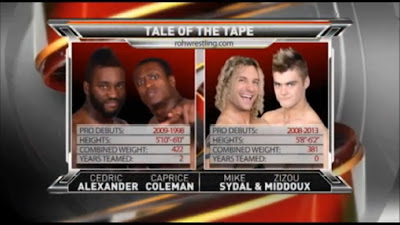 Elsewhere, C&C Wrestle Factory were in tag team action as they took on #PartyBoys. I have to admit I found it really difficult to get into this one, the action wasn't really what we've come to expect from Cedric Alexander and Caprice Coleman being fought at a plodding pace that never really got going. At the same time you have the team of Mike Sydal and Zizou Middoux who are still trying to find their feet, with only three previous matches as a team, and it was clear that they have yet to gel as a team. Middoux, himself, has yet to show me anything that marks him out as ready to be competiting at this level. The South African hasn't had too many matches, looking awkward when in control and having a number of notable botches, one where he was lucky not to seriously hurt himself.

C&C Wrestle Factory went on to pick up the win, after hitting their Overtime tag team manouvre on Middoux, with Coleman picking up the pinfall victory for the team. #PartyBoys definitely have a lot of work to do, if they want to become a regular feature of the ROH tag team division, and whilst matches against the likes of American Wolves and C&C Wrestle Factory will help them, they have yet to show me anything to believe they can work as a duo. Coleman and Alexander on the other hand, usually have very strong match ups, and therefore it was a little disapointing to see them look a little lethargic here, seemingly just going through the motions, hopefully normal service resumes soon for the promising tag team.

There was also a Four Corners Proving Ground match, with an opportunity to face Matt Taven for the World Television Championship next week on television. With Vinny Marseglia making his first appearance since May's Dragons Reign, after spending most of his time working for Masschusets based Top Rope Promotions, the only other wrestler in the match to compete for ROH before was veteran Brian Fury, who's sole match prior to this came in 2007, Fury's fellow Chaotic Wrestling competitor Todd Hanson, alongside Kongo made their debuts for the company. This was pretty decent four way contest, even if the tag in, tag out stipulation was quickly dropped by the competitors. The strongest sections of the match were when Marseglia and Fury were allowed to go at it, with both men starting and ending the contest with some athletic action. Hanson looking good when given the opportunity, with speed and flexibility rarely seen from a man his size, whilst Kongo suffered from having a recycled gimmick, which has been used by better wrestlers than he, namely Umaga. I'm not really sure what happened at the end, as the camera was showing Truth Martini and Matt Taven on commentary, but Fury picked up the pinfall victory. From what I saw here, Fury vs. Taven for the Television Title next week should be an interesting confrontation.

The big news coming out of Inside Ring of Honor this week was that Forever Hooligans had dropped the tag team titles to the American Wolves at All Star Extravaganza, before the Wolves themselves dropped the titles back to reDRagon at Manhatten Mayhem. Obviously, ROH is hoping the quick title changes will build to higher buys for the DVDs of those show, and it's worked with me, at least, I can't wait to buy the shows. C&C Wreste Factory also through their hat into the ring, asking for another title shot from Match Maker Nigel McGuiness, both men looked very strong on the mic and certainly deserve another shot at those belts. Kevin Kelly also interviewed Adam Cole, about his match with Mark Briscoe next week, whilst Cole's always seems to perform in the ring, he could definitely do with some work on the mic, as he wasn't particularly convincing here. Steve Corino also resurfaced, trying to get himself a job as a reporter, hopefully this isn't about to be a rehash of the SCUM story, although with Adam Cole talking a lot about Corino in his promo, it looks like that's what we might be about to get.

My final thoughts on this week's ROH on Sinclair.

1. Sonjay Dutt still has plenty to give whatever company he chooses to work for.

2. #PartyBoys still have a lot of work to do with their tag team, Middoux especially.

3. Brian Fury vs. Matt Taven should be a decent television bout next week.
Posted by Unknown at 19:47