It was a big week for ROH this week, as they presented the ending to the ROH vs. SCUM storyline with Steel Cage Warfare taking up most of the show and after two disappointing main events in a row, Ring of Honor had to deliver with this one. It also brought to a close months of ROH television being hideously behind with the real world, as next week we get footage from a brand new television taping. 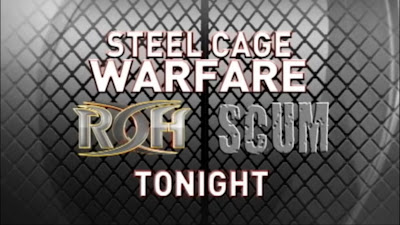 After a built up over over two years, the ROH vs. SCUM storyline finally came to close this week on ROH television, as ROH’s Team of BJ Whitmer, Michael Elgin, Jay Lethal and former SCUM leader Kevin Steen took on SCUM’s team of Jimmy Jacobs, Rhett Titus, Cliff Compton and Rhino. For anyone unfamiliar with the Steel Cage Warfare concept, it’s very similar to a War Games or Lethal Lockdown match. With one single ring surrounded by a steel cage, two competitors start the match, with another member of one team joining after five minutes, the teams then alternate entrants every two minutes. However, the major difference between the concepts, is that Steel Cage Warfare is an elimination style match up, we generally means that my main gripe with the Lockdown and War Games matches, that the ending is usually underwhelming, is pretty much taken out of the equation.

The match kicked off with BJ Whitmer and Jimmy Jacobs locking up for five minutes with some entertaining grappling action, before Rhett Titus entered for SCUM, who used the numbers game well. With Michael Elgin entering next, the tides turned, as the layers of story began to build up nicely. Things began to get really interesting when Cliff Compton entered, throwing powder in the eyes of Michael Elgin, before using SCUM’s signature Zip Ties to keep Elgin contained. With some great heel antics, Jacobs, Titus and Compton triple teamed BJ Whitmer, finishing him off with a Spike Piledriver, making it three on one, until Jay Lethal joined the fray for Ring of Honor. With Elgin untied things looked a lot better for ROH, until the Manbeast, Rhino entered last for SCUM, hitting a Gore on Michael Elgin. Then in one of my favourite sections of the match, Rhino ended up eliminated after accidentally Goreing Rhett Titus and getting a Lethal Injection from Jay Lethal.

This earlier section of the match, whilst entertaining merely felt like build up for the chaos that would ensue once Kevin Steen entered the match. With long time rival, Matt Hardy attacking Steen before he could get into the cage, everyone spilled to the outside, in full on brawl mode. With Steen and Elgin getting the upper hand on Hardy, Titus and Compton, sending them flying into the barricades and swinging steel chairs like their life depended on it, Jimmy Jacobs was setting a table up in the ring. There was a lot to watch and keep an eye on at this point, but the camera work was strong so it didn’t feel too busy. Jay Lethal then managed to fight off a double team attack from Jacobs and Titus, ending up hitting Titus with a Lethal Injection to get his second elimination of the night and give Team ROH a three to two advantage. With Steen and Elgin, busy with Hardy and Compton on the outside, that allowed for a nice exchange between Lethal and Jacobs to occur in the ring, with Lethal building for another Lethal Injection, he instead got a chair shot for his troubles, before being speared through the table in the corner, with Cliff Compton running in to pick up the pinfall, to even the teams at two men a piece.

With Jimmy Jacobs and Cliff Compton against Kevin Steen and Michael Elgin back in the cage, we got some a nice wrestling segment, orchestrated mainly by Jimmy Jacobs, who was my man of the match. ROH looked to have the match won when Elgin eliminated Compton after a Powerbomb from the top rope. It was now two on one in favour of Ring of Honor, but of course it wasn’t with Steve Corino and Matt Hardy both making their presence felt in the closing stages of the bout. With Corino taking advantage of the open door, to through fire, yes fire, at Michael Elgin, Jimmy Jacobs was able to get a pin and make it one on one. The match then got even crazier with Corino pouring lighter feud on Steen, with Jacobs clearly not agreeing with his leader’s action, he got pushed to the ground. The ending segment for me was epic, and closed off the story fantastically, with ROH Match Maker Nigel McGuiness stopping Corino’s plan with a swift Lariat, followed by Package Piledriver’s from Steen to Hardy and Jacobs allowing Steen to pick up the victory for Team ROH. Whilst ROH vs. SCUM has for the most part been entertaining, it was nice to see it concluded here, with a good story telling match that tied up a lot of loose ends for the feud, as it means that ROH can begin to focus on something fresh over the coming months, which can only be a good thing. 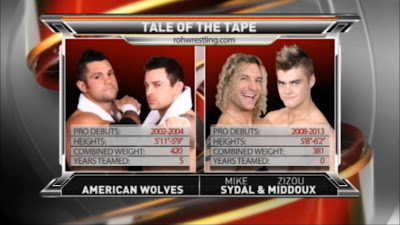 Due to the length of Steel Cage Warfare, there was only one other match on the card, which saw The American Wolves take on Mike Sydal and the debuting Zizzou Middoux. The match was a lot more competitive than I had first imagined with Sydal & Middoux getting in a lot of offence in on the ROH veterans. At times Sydal & Middoux seemed a little sloppy, but the American Wolves more than made up for any nerves that the younger duo seemed to be suffering. The new team showed signs of athleticism with a nice moonsault to outside from Sydal, the highlight, as they were clearly still in the development process for their team.

With the American Wolves beginning to dominate after Eddie Edwards broke up a near fall attempt for Sydal & Middoux, the Wolves quickly chalked up a victory, after a Double Foot Stomps from both Edwards and Davey Richards allowed Richards to pick up the pinfall victory on Middoux. The American Wolves continue to prove their worth to the tag team division as they looked impressive throughout, although Sydal & Middoux as a team are not quite ready for a regular spot on television, with Middoux looking especially ropey in this match.


What did I learn from ROH this week?

1. I hope this isn't the last we've seen of Jimmy Jacobs, but I'm not too fussed if the rest of SCUM are not seen again in Ring of Honor.

2. American Wolves are still one of the best tag teams in the business today.

3. It's good to know ROH are no longer two months behind the rest of the world!
Posted by James at 21:47