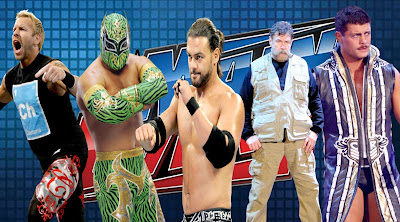 It’s been a good few weeks since I’ve enjoyed an episode of Main Event, after a series of unimaginative or uninspiring main event contests, this week’s show returned to the pattern that had made me a fan of the show to start with. With established main eventer World Heavyweight Champion Alberto Del Rio, taking on future main eventer Cody Rhodes, there was a lot of get excited about this week.

Going into this match there were a few things that needed to happen. Firstly, Alberto Del Rio needed to pick up the victory. After weeks of the World Heavyweight Champion coming up short against the likes of Randy Orton, Rob Van Dam and Christian, his victory over Kofi Kingston on Raw felt like a step in the right direction for the Mexican Aristocrat. Cody Rhodes also needed to have a strong, competitive outing to continue his new face run and keep him looking strong heading into his bout with Damien Sandow at this weekend’s SummerSlam.

As has been a trend during Del Rio’s matches as of late, the face got in a hell of a lot of offense in on the World Heavyweight Champion. Cody Rhodes’ move set alone is capable of getting him over as a face, as he pulled off a string of exciting and crowd pleasing moves, really putting his body on the line, the highlight for me would have to be the top rope moonsault, with Cody performs beautifully. It’s clear Cody is still getting use to his face role though, and he needs to remember to work the crowd more often to get them on his side, especially during this transition period. What little offense Del Rio was getting in however was focused on Cody’s arm as he attempted to soften it up for the Cross Arm Breaker. It was an interesting dynamic between the two and a refreshing change from your average WWE bout.

The bout built up well towards the end, with a number of reversals from both men before Cody managed to hit Cross Rhodes and it looked like he might pull of an upset victory. However, with Cody taking too long to make the cover, Del Rio ended up sending him into the second turnbuckle, before, after some struggle, locking in the Cross Armbreaker for the submission victory. In terms of an ending for the bout, I couldn’t have really asked for much more here, as it kept Cody looking super strong as he fought the Cross Armbreaker and really should have got the victory, whilst Del Rio’s underhanded tactics gave him the victory.

Personally, I think the match could have been given an extra five minutes that was given over to highlight packages of what happened on Raw. It felt like the ending with Cody too exhausted to get the cover, would have benefitted from having seen a longer match, as it was only just over ten minutes of television time. Either way, each goes into SummerSlam with a solid performance under their belts, which can only be a good thing come Sunday. With Cody currently feuding with World Heavyweight Championship Money in the Bank winner Damien Sandow, could we be seeing these two face off against each other with World Heavyweight Championship on the line within the next couple of months? If given enough time it’s certainly a bout I’d like to see.

Big E Langston was also in action on Main Event as he took on Justin Gabriel. Now this bout went a lot longer than I had expected with Gabriel getting in a surprising amount of offence in on the bigger Langston. Whilst this did make the match an enjoyable bout, with Gabriel’s quick kicks and exciting offence, I’m not sure if a quicker victory for Big E would have given him more momentum heading into his SummerSlam mixed tag team bout against Dolph Ziggler & Kaitlyn. Langston’s moveset seemed limited as he twice attempted his Big Splash (a move that is already overused in WWE), hitting it first time and missing it the second, which is strange because during his run as NXT Champion Langston was capable of having much longer matches than this one without the need to repeat moves. With Big E’s power had eventually overcame Gabriel’s speed, hitting the Big Ending for the pinfall victory, Big E was at least back on track after a disappointing saw that saw him dominated by The Great Khali.

WWE has been fairly hit and miss with Langston since bringing him up to the main roster. His matches have been few and far between, which has made it difficult for the WWE fans to really understand what he brings to the table. Personally, I don’t think he suits the heel role, and seemed much more comfortable as the top face in NXT. WWE has teased that he may turn face in the future, as it’s clear at times he is frustrated with friend Divas Champion AJ Lee. I could see Big E possibly turning face at SummerSlam, after AJ loses her cool once more. Big E could make a good opponent for Dean Ambrose over the United States Championship, if turned face, and I could see the two doing some good work together.

Elsewhere, The Usos built on their victory over The Real Americans on Raw, as they took on 3MB’s Heath Slater and Drew McIntyre, who were accompanied by Jinder Mahal. It was a solid tag team bout, with Slater and McIntyre doing a good job of working over Jimmy Uso, working quick tags, it seemed to be over pretty quickly with the hot tag being made. However, that wasn’t to be the case, as in a nice use of the numbers game, Mahal’s distraction allowed McIntyre to hit a big boot sending Jey off the apron. The action for the most part was quick and exciting, and when Jey finally made that second hot tag and took out Mahal and McIntyre on the outside with suicide dive, allowing Jimmy to hit the Superfly Splash on Slater, it felt like we’d seen some quality tag team action. We’ve seen what the Usos can do in recent weeks and months, but it was nice to see 3MB get a bit of the spotlight here, with Slater and McIntyre looking good as a pairing, personally I prefer these two to Mahal, but Mahal could work in a managerial role if they choose to push Slater & McIntyre as a duo.

1. Cody Rhodes still has some work to do on his face character, but his in ring talent is undeniable.

2. WWE doesn't seem to know what they're doing with Big E Langston.

3. Josh Matthews is my least favourite commentator in professional wrestling today.
Posted by James at 18:29