This week’s NXT was another mixed bag from WWE’s developmental show. There was relatively little match time compared to previous week’s episodes, and the emphasis on dancing was a little too strong, as has been with a theme with WWE in the last year or so. 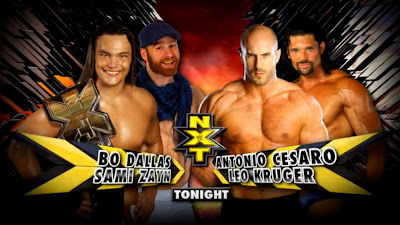 These four guys have all been involved in some interweaving storylines over the last two months or so, and it has actually been done pretty well, feeling like fairly old school in its booking. With the four wrestlers having matches with each other in a varying combination. So with the blow off seemingly on its way with Bo Dallas defending his NXT Championship against Leo Kruger, and Sami Zayn and Antonio Cesaro surely having their rubber match sooner rather than later, this was a nice way to build to those match, as well as beginning to tease to what might be coming once those rivalries are finished.

It’s interesting to note that Dallas got the biggest heel reaction from the crowd, despite playing a face character. The Full Sail arena are certainly not fans of Dallas’ and they’ve made that clear since he became NXT Champion, and it simply boils down to the fact that Bo isn’t ready to be the top guy on NXT and his character is so damn annoying. A smiling happy babyface is a difficult character to get over with anyone anymore, especially when the in ring skills aren’t quite there as well. This being said, the match did a good job of playing on this, with Dallas tagging himself in and looking reluctant to tag in fan favourite Sami Zayn. If WWE changed Dallas heel they could at least have a chance of rescuing him after they through him in at deep end to early, and a rivalry with a Zayn fresh off of beating Cesaro would certainly work well.

The match saw Cesaro and Kruger working well as a team to dominate Zayn for most of the match, with some nice psychology between Cesaro and Zayn, where Cesaro would only face Zayn after Kruger had beaten him down. The interesting turning point, where Zayn got the hot tag to Dallas, got roundly booed, and Dallas did his happy face routine. With Cesaro and Zayn pulling out an angle that is rarely used these days, the fight to the back, it really helped to sell their rivalry even further. The ending saw Dallas throw a fleeing Kruger back into the ring, only to take a knee to the face and Kruger’s Slice Lariat to pick up the pinfall victory for his team. It was a nice ending and gave Kruger momentum heading into the NXT Title match, and the crowd loved it because Dallas lost!

Now, I’ve already touched on where I think this is going to go in the next few weeks. It can only be a matter of time before Bo Dallas is turned heel, WWE can’t keep putting out the smiling babyface Dallas, because people just aren’t buying it, and he isn’t technically strong enough for people to get behind, against stronger competitors like Cesaro and Kruger. Cesaro and Zayn could very well be NXT’s match of the year, they’ve already have two fantastic battles on NXT, but you know that these two will bring everything possible to knock this one out of the park. Personally, I’d have Zayn pick up the victory, because it won’t harm Cesaro, whilst it would allow Zayn to move into a feud with a newly heel Bo Dallas for the NXT Championship.

Elsewhere on the show, new NXT Tag Team Champion Corey Graves was in action against Scott Dawson, who had Sylvester LeFort in tow. With Graves accompanied by partner Adrian Neville who in a backstage segment said he’d be joining Graves, in case The Wyatt Family turned up. The match was pretty basic with Dawson working over Graves for the majority of the match, with some simple holds and blows. The ending was quick, with Graves making a comeback with a chopblock, before locking in Lucky 13 for the submission victory. The match did what it had to do, in setting up what was to come, but could not be accused of being exciting.

After the match, the distinctive opening of The Shield’s music hit, as United States Champion Dean Ambrose and Tag Team Champions Seth Rollins & Roman Reigns, made their welcome return to NXT. With Seth Rollins renewing his feud with Corey Graves with a solid promo, and then Dean Ambrose ripping into Adrian Neville, accusing him off simply stepping into Kassius Ohno’s shoes. Neville retored by challenging Ambrose to put his money where his mouth is, in a match for his United States Championship, which Ambrose eventually agreed to have next week. It was a great segment and a good way to bring The Shield back into the NXT fold, the prospect of Ambrose vs. Neville next week is one I’m definitely looking forward to. I imagine we may see a Champions vs. Champions Tag Team Match somewhere down the line.

The Wyatt Family made what looked to be their final appearance on NXT this week, and did so as faces. After Luke Harper and Erick Rowan had quickly squashed Mickey Keegan and Aiden English, via pinfall after a big splash from Rowan. Bray Wyatt went to cut a fantastic face promo, possibly my favourite of any promos I’ve seen him cut. It really opened my eyes to the fact that the Wyatt’s could be used as a face group without too much tweaking to the gimmick. It will a new NXT landscape without The Wyatt Family, and I expect them, like we’ve seen with The Shield, to make occasional appearances from now.

In the opening segment of the show, Enzo Amore and Colin Cassady came out with Amore cutting a charismatic promo, however Cassady’s attempt was not so great. Maybe it would be better if WWE keep Cassady as Amore’s silent stooge. With Amore mentioning dancing, a surprise appearance from Tons of Funk (minus The Funkadactyls) as they came out to confront Amore and Cassady, who attempted to run off. They were stopped by rival Mason Ryan who sent them back into the ring to be destroyed by Brodus Clay and Tensai. This really didn’t work for me, as with Ryan getting involved, it was basically three on two, towards the faces, which wasn’t helped by the fact that Amore and Cassady are more over with the crowd.


There was also womens action this week, with Charlotte taking on Sascha Banks. Charlotte is clearly incredibly green in the ring, and I’m surprised she’s been pushed so heavily on NXT so quickly, with most wrestler’s having to do a certain amount of time at the bottom of the card before getting the treatment Charlotte is, obviously Daddy has done a lot. Now that’s not saying she is awful and she does have some impressive moves, like Charlotte’s web, but there was no sense of story or flow to this match. As for Sasha Banks, I didn’t even know she meant to be heel until about half way through the match. Charlotte picked up the victory with a Forward Somersault Cutter. Charlotte does seem to have potential, but WWE needs to be careful not to push her too quickly, because she simply isn’t ready.

Continuing on the dance theme, with NXT General Manager Dusty Rhodes talking to new NXT Women’s Champion Paige, alongside Emma, Summer Rae interrupted to complain about not being involved. There was some bickering between Emma and Summer, before Summer offered up the idea of a Dance Contest next week, with Dusty making the “match” official. Paige summed it for me, reminding Emma and Summer that this was wrestling, if only someone in WWE would listen to her words.

After his debut last week Tyler Breeze was interviewed by Renee Young. We didn’t get many answers, but Breeze plays the obnoxious heel role pretty well, it’s an old gimmick that’s been updated for the Selfie generation. CJ Parker also turned up in the background of the interview, including making a dreadlock mustache. We haven’t seen much of Parker on NXT, mainly jobbing to talent higher up the card and so it will be interesting to see him moved into a more prominent role.

1. Even Sami Zayn can't get the NXT crowd to cheer for Bo Dallas.

2. With Ambrose vs. Neville and Cesaro vs. Zayn III on the way, the next few weeks of NXT are must watch.

3. WWE needs to remember the cliche, "This ain't ballet" and minimize the dancing gimmicks.
Posted by Unknown at 23:27