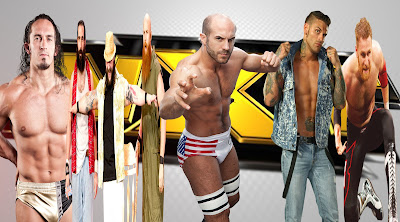 This week saw a special edition of NXT entitled Face Off Week, with long running rivalries coming to a head and two championship battles on the card, there was a lot to look forward to this week. Did the show live up to the anticipation? Let’s find out. 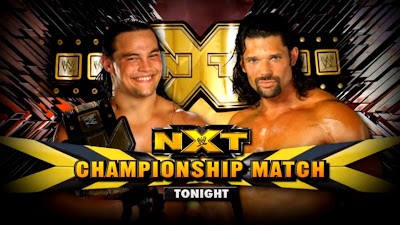 We’ve seen a long slow build up to this title match, with Dallas and Kruger, along with Antonio Cesaro and Sami Zayn being involved in old school type build, with multiple match combinations that built to this contest. After Kruger cemented himself as Number One Contender three weeks ago, and managed to pin Dallas in a tag team match last week, there seemed a strong possibility that we might see a new NXT Champion on the show. Building up to the contest, we saw a vignette involving Kruger talking about Dallas’ negative relationship with the NXT Arena faithful. The vignette was well edited, and really helped Kruger’s crazed character to come over well, this is by far the strongest gimmick I’ve seen him handed in NXT. The NXT Champion was interviewed backstage by Renee Young, and personally I think Bo Dallas is a heel now, at least one aimed at your average internet wrestling fan, as he bad mouthed Antonio Cesaro and Sami Zayn, saying they weren’t ready, insult the internet darlings your almost guaranteed to get heat.

The match contained an interesting dynamic, as anything Bo Dallas would do offensively would get heavily booed by the NXT Arena, whilst all of Kruger’s actions were cheered. Therefore the structure of the match was a little off and it didn’t really capture my attention, as a comeback from Dallas became a heel move against the bigger Kruger. Whilst Dallas has improved on his mic skills and developed a coherent character over recent months, his in ring work still leaves a lot to be desired, in particular, his selling. Whilst in the closing segments of the match with Kruger looking to be closing in on victory, Dallas was placed in the GC3 submission hold, and I just couldn’t believe that Dallas was in any kind of pain and it really ruined what should have been a great moment in the match.

The ending saw Kruger go for a splash off the top rope, only to receive two knees to the gut from Dallas, who locked in a new submission hold, an elevated version of an armbar. Kruger did a better job of selling the hold, and Dallas actually looked to be putting some effort into the hold. After about ten seconds, Kruger had had enough tapping out to the hold, as Dallas retained the NXT Championship. I wasn’t a massive fan of the ending, as having Kruger tap out here removed any kind of mystique from the character and pretty much removed him from the championship scene once again, personally I think a roll up victory for Dallas would have continued to cement his new character, as he could have bragged about his “spectacular” victory for weeks and week.

So, where does the NXT Championship picture move on from here? Personally, I think NXT should continue to build Bo Dallas into the heel role he has grown into over the last few months, by finally placing him against a face. Who better to step into that role than arguably the most popular face on NXT at the moment, Sami Zayn. It would set up a nice dynamic with the crowd and allow Dallas to gain the experience that working with someone of the calibre of Zayn would. Plus, seeing Zayn pick up the NXT Championship would be a big moment for the show, against the despised Bo Dallas.


Best of the Rest (In The World)

Elsewhere on the show, WWE presented a legitimate dream match for the United States Championship with The Shield’s Dean Ambrose defending his title against NXT Tag Team Champion Adrian Neville. I have to say, I was slightly disappointed by the bout. Whilst the wrestling was, of course, solid, the slow build of the match didn’t quite seem to go anywhere. It felt to me like the match was building for a half hour epic, and it didn’t quite turn out the way. After some strong mat and submission wrestling from Ambrose, I really wanted to see Neville able to let loose and the pace of the match to lift, whilst that did happen to some degree with Neville making a strong comeback, it felt like this match still had some extra layers of story to tell.

The ending saw some good athletic work from Neville as head made his comeback, and following a spectacular dive to the outside, Neville headed to the top rope and actually hit Red Arrow, only for Tag Team Champions Seth Rollins and Roman Reigns to make the interference, to give Neville the disqualification victory, but allow Ambrose to retain the United States Championship. I was really surprised by this ending as it made Neville look incredibly strong, as he really should have won the title belt, and rematch must surely be on the cards. With The Shield beating down Neville, Neville’s tag team partner Corey Graves and NXT favourite Xavier Woods made the save, chasing off the Shield. With a six man tag now set for next week, I hope that this match is giving enough time to build naturally and allow the layers of story to be put in place properly. 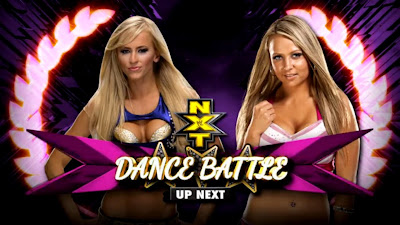 The show also saw a Dance Battle between Emma and Summer Rae with the winner receiving a shot at Paige’s NXT Women’s Championship. I’ve been pretty vocal about WWE’s over reliance on dance gimmicks lately and this pretty much typified the situation for me. Why not just Summer Rae and Emma battle it out in the ring have, you know in a wrestling match? To be fair to Emma and Summer Rae they did do a good job with what they were given and managed to build the battle as it went along, but I’m a wrestling fan, not a dance fan. It was clear who the winner would be from the outset with the NXT crowd deciding the winner. After Emma was declared the winner, Summer attacked her, hitting an Inverted Leg Drop Bulldog to close the segment. Bizarelly after Emma won the contest, it was declared later in the night that Summer Rae would get a shot at the Women’s Championship next week. After the strong booking of the Women’s Championship tournament, NXT has really let itself down with this.

Tyler Breeze returned to action with a squash match against London’s Danny Burch, who hadn’t been seen since May. Breeze’s character is really coming into its own, and was helped this week by not spending too much time on the “Selfie’s” before the match, allowing us to get more of a glimpse of what he can do in the ring. Breeze picked up a quick victory with a Spinning Wheel Kick. After the match, Breeze lay on top of Burch, whilst taking one final selfie. It will be interesting to see how the Tyler Breeze character begins to develop over the coming months, as it has the potential with a little work to be a top heel gimmick for NXT.

Backstage, Enzo Amore and Colin Cassady met up with Scott Dawson and Sylvester LeFort to discuss Dawson’s match with Mason Ryan next week on television. Amore continued his entertaining way, throwing in his “SAWFT” catchphrase for good measure, as he told Dawson that he would easily beat Ryan. In an interesting twist once Dawson and LeFort left, Amore told Cassady that Dawson didn’t stand a chance, saying they’d be at ringside next week because they didn’t want to miss it. Whilst, I don’t have a particularly high expectation of the Mason Ryan vs. Scott Dawson contest, I’m sure with Amore at ringside there will be some entertainment coming from somewhere and am interested to see where it goes. CJ Parker was once again spotted in the background of the scene, pulling some more funny face, where it is going I have no idea, but for now it’s kind of funny, at least.

What did I learn from NXT Face-Off Week?

1. I'm beginning to like Bo Dallas' mic work, but his in ring ability still isn't up to scratch.

2. Even Dream Matches can disappoint.