The Kick-Off show has began to take on a bit of a life of it's own. Originally the bouts would be about four minutes long, and there really was no much point tuning in early. However, in the last few shows there's been a noticeable shift to longer matches, usually longer than most of the matches on the PPV. I think WWE has realised that this is a great platform to push for the last few pay-per-view buys and a long impressive match may just change someone's mind. 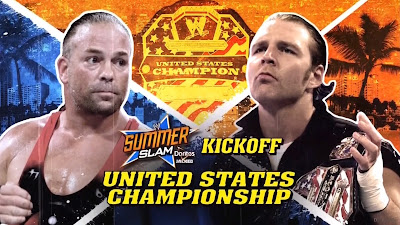 The Shield are apparently chasing The Miz's former title of Mr. Kick-Off, after making appearance on the last two shows. They are a good choice for this role, as they almost always have good and exciting matches, and usually wouldn't get this amount of time to show what they can do on pay-per-view. Rob Van Dam has only been back with WWE just over a month, and after WWE made such a big deal over his return with some good hype videos, I was a little surprised to see him only make the Kick-Off bout this time round. WWE really could've done with giving Van Dam a story heading into the show, as it took them til the final Raw before this pay-per-view to even book him in this match. He even could have been added to the Christian vs. Alberto Del Rio bout, to give that match a bit more pull.

The opening part of the match was strong with Ambrose working well in grounding Van Dam. There was some exciting back and forth with both men doing a great job at getting the crowd involved. The crowd were redhot from the outset of the battle and of course that really helped Van Dam's performance. With Van Dam taking control of the bout, after reversing Ambrose's Headlock Driver, with a series of kicks, it looked like it might be over early with Van Dam heading to the top rope for a Five Star Frogsplash, only for the Shield's music to hit and Tag Team Champions Seth Rollins and Roman Reigns to make their way down to ringside. I didn't really understand the logic behind this move, as Rollins and Reigns took so long to get down to the ring, that Van Dam could of hit his finisher and won the United States Championship in the time that it took them to get down to the ring.

When we returned for the break, Van Dam was in full control again, so with The Shield trying to get involved, Mark Henry and Big Show made came down the aisle to even up the numbers. The in ring action continued to be strong, with Van Dam continuing to have the upperhand for the most part, with Seth Rollins' distraction not allowing Van Dam to hit the Five Star Frog Splash for a second time. However, Van Dam did finally manage to hit his finishing move a few minutes later, this time over the other side of the ring, however when he went for the cover, he ended up on the receiving end of a Spear from Reigns, giving Van Dam the disqualification victory, but allowing Ambrose to retain the United States Championship. We've seen a lot of similar endings from The Shield lately, and it's beginning to make Ambrose look like a weak United States Champion after originally being booked so strongly, with no need for Rollins and Reigns to interfere in his match, he could really do with a clean win soon.

After Show and Henry had chased off The Shield, the three veterans celebrated in the ring, with The Shield taunting them from outside. Obviously WWE wanted to keep Van Dam looking strong here, without actually giving him the United States Championship, therefore I wouldn't expect to see a rematch between the two anytime soon, especially not for the title. However, I do expect to see Show and Henry get a title shot at The Shield's Rollins and Reigns, possibly at the next pay-per-view, Night of Champions. It will interesting to see how the dynamic of the two big men plays out in this kind of battle, as WWE hasn't really had two big men team together in quite some time.


Elsewhere on the show, Paul Heyman had an announcement to make about Brock Lesnar's match with Paul Heyman at SummerSlam. After a beautiful analogy comparing Punk vs. Lesnar to David vs. Goliath, with some classic Heyman changes to the story. Then Heyman, announced that both parties had agreed that the bout would be No Disqualification, before talking about how Lesnar was going to dismantle Punk. It was a nice addition to the pre-show and the news of a change in the match might have helped people who were previously unsure about buying SummerSlam dip into their pockets.

The addition of the No Disqualification rule was certainly a good move in my opinion. We've seen a lot of weapons used in the build up to this one, and therefore if they'd have gone for a straight up wrestling match it might not have felt as impactful as the build-up had been. Also, we've seen Lesnar in a number of No Disqualification match since his 2012 return, and it certainly is the best enviroment to have The Beast Incarnate do his work, as it can make him look even more vicious and dominating. It would also give Punk an oppurtunity to get his hands on Paul Heyman without getting reprimanded by the referee!

The panel for SummerSlam Kick-Off was hosted by Josh Matthews, who was joined by WWE Hall of Famer's Shawn Michaels and Booker T, as well as Smackdown General Manager Vickie Guerrero. Michaels and Booker were informative and entertaining bringing a nice insight into the rivalries and matches that would be going on during the show, with Vickie occasional chipping in, but for the most part she was simply there to make up the numbers and give her something to do. I'm not a massive fan of Josh Matthews on commentary, but here he was at least tolerable, setting up conversation points for his panel well.

Renee Young also got invovled in the show, as we occasional visited her in what was termed “The Social Media Lounge”, what this meant was a sofa and a television screen that would occasional show tweets. Renee is good as a host, she's likeable and her tone makes her easy to listen to as she lead us through what the WWE fans were thinking on various forms of social media, however where she came undone was when she had to speak about how own opinion on wrestling, especially when talking about her favourite SummerSlam moment. It was clear she was being fed the lines and didn't really know what she was talking about.


Throughout the show we were also joined by Tony Dawson who was outside the arena talking to fans. This was a nice touch, even if Dawson was a little close to the camera a number of times, which I'm sure will give children nightmares for weeks to come. The fans interviewed were excitable and clearly a little taken aback at being aproached to be on television, however their answers were good and helped to get a sense of how the crowd would be in the arena once the show had started.

What did I learn from SummerSlam Kick-Off?

1. WWE has bigger plans for Rob Van Dam than the United States Championship.

2. A little addition to the card on the Kick-Off helps to build anticipation.

3. These Kick-Off shows really get me pumped for the real thing.
Posted by Unknown at 20:14