After last week's interview with 4 Corners Radio's Billy Carpenter, we're stepping back into the ring with former Ring of Honor wrestler, Jon Davis. 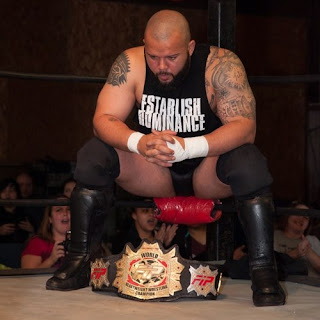 
I've always loved pro wrestling. I grew up on as a lot of kids in the south did. I was an NWA/WCW kid as the WWE/F wasn't big in my area at the time.  I was always a fan of the physicality of it. It wasn't a character or soap opera thing, I liked the competition aspect of it. A lot of the matches I remember as a kid to mid teenager are like that- Anderson/Windham, Flair/Steamboat, Steiners/Williams and Gordy, Pillman/Liger. I always felt like matches like that made wrestling appealing because they would draw you in with them and there didn't have to be pyro or catch phrases (Flair excluded). And when I started getting more into the WWE, that's what got my attention about Bret Hart. To sum it up,  It's a physical chess match that I couldn't wait to watch every week.

2. Who has been your favourite opponent to step into the ring with so far and why?

That's hard to say. I like to consider myself a student of the game and have learned from everyone I've been in the ring with. Guys like Fit Finlay, the American Wolves, Low Ki and Sami Callihan are very physical but smart wrestlers and make you dig deep to keep up. Guys like AR Fox and Samurai Del sol are what Lucha/high flying is all about and you would of course have to prepare differently. Then you have guys like Johnny Gargano and Chuck Taylor who are young veterans and will always surprise you with what they can do. So I guess at any time depending on my mood, any of those men would be the answer.

3. What would you say to anyone currently interested in pursuing a career in Pro Wrestling?

BE ABSOLUTELY SURE THIS IS WHAT YOU WANT. This is a demanding business and not for the ones who aren't serious. It takes a toll on your body, mind and your life. If you are lucky enough to get a break somewhere, take full advantage of it because it is neither guaranteed  or promised to last forever. You either need to want and work to be the best you can or chase a different dream. It sounds harsh, but its the nature of the beast. You should never do anything and be able to look back on it and say "if I would've tried harder...."

Vs. Johnny Gargano- No Ropes from DGUSA "Revolt" and

Watch them and you'll understand why.

5. Where can our readers catch you in action next and will you be making your way across the pond anytime soon?

I will be in New York on July 27th and 28th competing for DGUSA. You can catch those shows and all the ones previous on WWNLIVE.com or be there I'm person. Though I don't have any plans to make it over there at the moment, I would love to very soon.
Posted by Unknown at 19:30