ROH CM Punk: Icon is available on two disc DVD set now from rohwrestling.com priced at $19.99 (about £13 plus shipping). This set fits in between previous DVD sets The Second City Saint and The Summer of Punk, looking at events between July 2004 and June 2005, as well as Punk's surprise appearance at Unscripted II in November 2006. 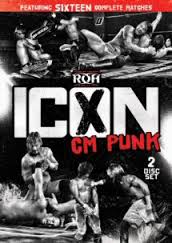 
Ring of Honor continues to munch through it's catalogue footage at an alarming rate, with their most recent set CM Punk:Icon, focusing on Punk's work in ROH between 2004-2005 (not including his fantastic series with Samoa Joe). If you're a fan CM Punk's work in WWE over the last few years, then this will be a great set to get you interested in his work for Ring of Honor, and I'm sure that is what ROH is hoping for. They have released a number of other set's on The Straight Edge Saviour over the last few years including The Second City Saint, Samoa Joe vs. CM Punk and The Summer of Punk. It does feel a little bit of an over kill, and ROH might have been better spreading out these sets a bit, with pretty much all of Punk's ROH career now covered in these sets.

That however, doesn't stop this from being a very good watch, with a ton of top notch wrestling content. If you're looking for a documentary feature or a commentary on Punk's career, there isn't one, this is simply a compilation of Punk's best matches during that period. Similar to WWE's most recent DVD on ECW, this DVD set is helped by the variety of matches available. A number of best of set's can become a little repetitive, with similar matches, luckily this set doesn't go down that route, which is really a testament to the good work that Punk did for the promotion. From solid tag team action with Colt Cabana against The Briscoes, to teaming with Ace Steel in an awesome Chicago Street Fight against BJ Whitmer and Dan Maff in a bout that will surprise those only familiar with Punk's WWE work, to good singles outing against the likes of Austin Aries and Roderick Strong, there is enough to keep you engaged throughout the entire set.

It's a really a testament to Gabe Sapolsky's booking that there is not just one clear narrative throughout this set but a handful, starting with Punk's face turn saving Ricky Steamboat from Generation Next, before the introduction of Punk's feud with The Embassy and specifically Jimmy Rave. I guarantee if you weren't watching ROH during this time period and even if you were by the time Punk collides with Rave at Nowhere to Run in a terrific Steel Cage battle, you'll be willing on Punk to pick up his victory of Rave.

If you're used to Punk's work for WWE, you should settle yourself in for a long ride, with most matches running over twenty minutes, with a lot of stories to be told. The only short matches by ROH standard are Punk teaming with Cabana and Steve Corino to take on The Embassy at Trios Tournament and poor outing for Punk against Mike Kruel from Stalemate. Luckily both matches include either pre-match brawl in the case of the Trios Tournament match, which more than makes up for the actual contest being a little on the short side, and the Kruel bout, features Bobby Heenan putting Punk over after the match, followed by a great brawl between CM Punk and Jimmy Rave.

The only downside to this DVD, is that there is no space in between the matches, with no entrances for the competitors, you are kind of flung straight into the action. Whilst this down mean that the set can include more matches, it does mean that it takes a while to recover from the previous match and truly get into the next one, luckily the match quality is good enough that it doesn't take particularly long. It would have been nice to see some linking narration between the matches, maybe from someone like Steve Corino, who was involved with Punk around this time and currently still works for ROH, which would have given little bit of breathing spaces for the matches, as well a little extra explanation as to what was going on in ROH at the time.

Overall, this is very strong DVD set, with some top notch matches across both discs, a great story to discover or relive between Punk and Jimmy Rave, as well as the interesting inclusion of Punk's one night return to ROH, after TNA stopped talents from appearing, in a cracking tag team bout teaming with Bryan Danielson (WWE's Daniel Bryan) to take on Rave and Adam Pearce. If your looking to check out Punk's work outside WWE then this would be decent place to start.


Three Matches to buy this set for...

2. Two Out of Three Falls Match: The Second City Saints vs. The Briscoes from Death Before Dishonor II - Part 1

3. CM Punk vs. Roderick Strong from The Future is Now
Posted by Unknown at 00:24