ROH A Night of Hoopla is available now on DVD from www.rohwrestling.com priced at $19.99 (about £13 plus shipping). The show was taped at 115 Bourbon Street in Chicago, Illinois, USA, with the gimmick of the show being that it is booked by leader of the House of Truth, Truth Martini. Main evented by an Inter Gender Six Person Tag Team match, pitting BJ Whitmer, Michael Elgin & MsChif against Adrenaline Rush & Athena, alongside reDRagon defending the World Tag Team Championships against Roderick Strong & Cheeseburger and Jay Lethal taking on Delirious, this is Ring of Honor like you have never seen before. 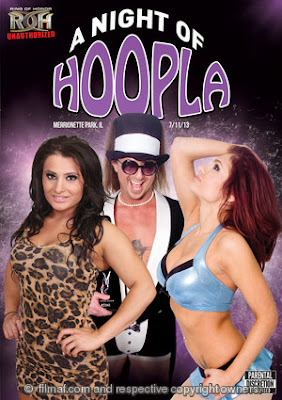 Sore High With The Eagles and Slither With The Snakes: Jay Lethal vs. Delirious (Special Guest Referee: Maria Kanellis) (17:02)

The Pants Off Dance Off

A lapdance for one lucky fan

Hoopla Uncut with The Devil


Similiar to what TNA have been doing with the One Night Only series of PPV's this show sits outside of the regular continuity of Ring of Honor, and feels completely different because of it. The main event however could fit quite comfortably onto any ROH card and not look out of place. All six competitors put forward a very strong outing, with Adrenaline Rush continuing to impress as a duo. The comedy in this one is also played very nicely, centering around Elgin and MsChif's relationship. The match builds really nicely towards the finish, that will have you questioning how you didn't think of it earlier. ,

The World Tag Team Championship match with reDRagon defending against Roderick Strong & Cheeseburger is more entertaining than it should have been. That's not saying that I don't respect the talents of the wrestlers in the ring, it's just the story for this one seemed so simply with the younger smaller Cheeseburger involved that you'll think you'll know where it's going and it will take you in a completely different direction, helped by the fact that Chicago absolutely loved Cheeseburger. The concept of the show allows reDRagon and Strong to be a little freer in their performance and once again there are some nice comedy moments that complement the action in the ring.

Jay Lethal vs. Delirious is an absolute gem of a contest. At times it will had me in stitches as the two run through Randy Savage vs. Ultimate Warrior from Wrestlemania VII, with Lethal, of course, playing Savage and Delirious presenting us with an parallel universe version of Ultimate Warrior. Complete with spot on pre-match promo from Lethal in the style of Savage and Lethal's manager Sister Sherri, this bout had me in stitches from start to finish, with Delirious' impression of Warrior bordering on the ridiculous. With a shock ending and closing segment with Special Guest Referee Maria Kanellis, this is a new look at a classic.

Davey Richards taking on Silas Young is a decent enough contest, that is hampered by a Lumberjill gimmick where all the Lumberjills are in fact men. It's a very surreal outing, when I much rather would have seen Young and Richards just have a straight up wrestling match. The three way opener between World Television Champion Matt Taven, Eddie Edwards and Adam Cole is a solid three way bout, with some nice fan interaction, and interesting "Eiffel Tower" spot, but probably could have done with a bit more time. The segments also presented on the show are mixed bag with Jimmy Jacobs performing "Gypsy Soul" as well snippets from other songs including "Ballad of Lacey" is a nice nostalgia hit for old school ROH fans, whilst Hoopla Uncut with The Devil is a severe waste of time, alongside a fan getting a lapdance whilst blindfolded, in a segment that is so outdated it was painful to watch.

Special Features include two parts of the special "Hoopla Roll" with Truth Martini attempted to gain talent for the show, with some very entertaining segments with the likes of Jimmy Jacobs and Kevin Steen standing out, Hoopla Uncut with Delirious is a similarly entertaining affair. Elsewhere, however a concert from Beach Bum Alcoholics concert during intermission of the show is deservedly rubbished by the Chicago crowd, it really isn't very good, in either a musical or comedic sense.

Overall, this is an enjoyable show, with some nice matches that are easy to watch, but it let's it's self down with some pretty rotten segments. Some other little things also let the show down for me, mainly the camera work, which is poor throughout, with the stage meaning that the cameras after often at awkward angles to the ring. There is also no commentary on the set, and whilst that didn't effect my enjoyment of the show, I know that certain people will find it difficult to adjust to.

Top Three Matches from a Night of Hoopla

2. Sore High With The Eagles and Slither With The Snakes: Jay Lethal vs. Delirious (Special Guest Referee: Maria Kanellis) (17:02)