TNA One Night Only: Joker's Wild is out now on DVD and available from www.clearvision.co.uk, priced at £10.99. This is the first of TNA's One Night Only shows that I've managed to catch, I decided to wait until the shows hit DVD, seeing as they don't follow any recent storylines, I haven't gone out of my way to check them out. This show, filmed at the Impact Zone in Orlando, Florida in the United States on 12th January 2013 and first broadcast on 3rd May 2013, is focused around the Joker's Wild theme with teams picked at random to face each other, with the winning pair heading into a Gauntlet (or Royal Rumble). The Twelve Man Gauntlet was the main event of the show, which also features Christopher Daniels teaming up with Samoa Joe to take on Chavo Guerrero, Jr. & Rob Van Dam, and the big man duo of Matt Morgan & Robbie T taking on rivals Al Snow & Joey Ryan. 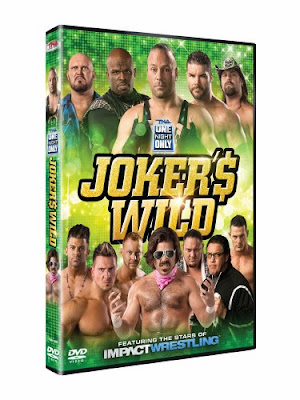 I'm going to come straight and say that didn't like this show, I'll get into why as I run down the individual matches. Starting at the ending, the main event featuring the winners of the randomly picked tag team matches earlier in the night, in a Gauntlet match (or Royal Rumble) which has it's moments but for the first fifteen minutes is incredibly hard to get into. Without any build up on television, these pay-per-views needed to have a hook that people would interested in seeing, a first time match, some returning names or a match which we've seen before but know will be awesome, so the hook for this one is the Gauntlet, but why am I supposed to care? I don't care if one of these guys "wins" $100,000, so there is no emotional investment, for what is a fairly lengthy main event contest. There's also a couple of disappointing early elimination for guys that could have made the bout interesting, which didn't help. There's a cliche interaction between Matt Morgan and Robbie T, that you will most likely have seen a version of before, but at least it throws and element of story into this mess. The finish between two long time TNA rivals is probably the strongest element of this bout for me.

Going into the show, I marked Christopher Daniels & Samoa Joe taking on Chavo Guerrero, Jr. & Rob Van Dam, as a potential match of the night and it probably was, but it's nothing spectacular. It's good solid tag team action, with Samoa Joe and Christopher Daniels making a solid team, although that's what you'd expect with their past history. Guerrero works nicely with both men throughout, whilst Van Dam is in his typical TNA style of phoning in the bout, not really looking interested at any point. Christopher Daniels continues to be the highlight of TNA programming with his performance in this bout really raising the bar with his in ring antics. The finish well worked and built up to nicely, with all four men contributing well. Out of all the random bouts, this one felt that most thought through in who was paired together, it only get's weirder for this one.

Robbie T & Matt Morgan vs. Al Snow & Joey Ryan is more entertaining than it deserved to be. There's a little build up to this one, with Morgan and Ryan (who were a brief team in TNA) convinced they are going to be picked together, it's obvious what's going to happen from the start, but the look on Joey Ryan's face when Al Snow walks down is great stuff. There's a fairly unique dynamic with neither Morgan or Ryan wanting to fight each other making for some funny moments, at times. The finish is also clever and will had me asking why I hadn't thought of it already. Overall, the story carries this bout, as there isn't a lot of wrestling to get into, but it's at least enjoyable throughout.

Zema Ion & Robbie E vs. Joseph Park & Bobby Roode is well worked by four talented guys, but there isn't really anything that makes you take notice of what's happening, even if they try to integrate a story with Bobby Roode & Joseph Park, which doesn't quite pay off. Jessie Godderz & Mr. Anderson taking on Kid Kash & Doug Williams, could've been a good match, but devolves quickly into body slash from Kash and Williams as they work over Godderz, not at all entertaining. Aces & Eights manages to get Devon & D.O.C. randomly drawn together to take on Hernandez and Alex Silva in another match that I found it difficult to get into, it's just too clear who's picking up the W. The opening contest with James Storm teaming with Christian York to take on Gunner & Crimson has some nice teamwork but follow a very basic pattern that probably didn't need as much time to play out.

There is some backstage footage included interviews building up the match, but the guys involved can't really say much other than "I'm going to win" as there isn't any story for them to work and the majority come off a little wooden. Christopher Daniels does a good job in his backstage segments, talking up his tag team with Samoa Joe is gold, Daniels really seems to enjoy being able to have a bit more free reign and it works wonders here. The commentary team of Mike Tenay and Taz couldn't care less throughout talking about anything and everything other than the matches, but at times Taz's random wit does save what is pretty tiresome viewing.

Overall, I'd say this event wasn't for me. There just wasn't enough to get my teeth into and the majority of the matches weren't strong enough to get me involved without some kind of storyline, and having guys that rarely appear on Impact Wrestling like Alex Silva and a large proportion of this shows roster having since been released it's hard to connect with the wrestlers in the ring. I think if this had been a regular tag team tournament, I'd have been a lot more interested in the concept, as I'd have wanted to see which random pair came out on top, however the Gauntlet ending feels rushed and the idea of money being used a prize in wrestling in 2013, is highly outdated.

Top Three Matches on One Night Only: Joker's Wild