This week's WWE Main Event was a bit of a funny one for me, for a number of reasons. Firstly, the match that I was most interested in, wasn't place in what has been considered the “Main Event” slot on Main Event (the first match on the show), neither was it the longest match, it actually went on last. I'm not quite sure if I like the change of format for Main Event they used this, the old format is what made it stand out from other WWE programming and made me want to watch in the first place. It risks going the same way as WWE Superstars if they carry on this way. 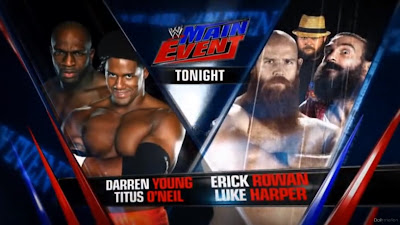 As I said in my opener, this was the match that really caught my attention when I noticed it was scheduled for this week's Main Event and for a number of reasons. Firstly, both of these teams have been a role as of late, with Luke Harper and Erick Rowan still undefeated as a Tag Team on main roster WWE television, and The Prime Time Players were on a decent run as well, with victories over The Real Americans and 3MB on Raw and Smackdown recently, so who would WWE chose to go over here. Secondly, I was interested to see how the two teams fitted together in the ring, with The Shield possibly dropping the Tag Team Championships at some point soon, it would seem logical that these two teams could end up feuding over the belts, I'm guessing that WWE might have been interested in that idea to, which might have been the reason for this bout in the first place.

The match was shorter than I imagined it would be, running at around three minutes, but it was probably the most competitive match we've seen someone have with Harper and Rowan. With Titus O'Neil and Rowan having a nice big man exchange to kick off the match, before it settled into you usual beat down from the heels, who worked over O'Neil pretty well. I was really impressed by Darren Young in this match, as he has really taken to his new role as a face, he worked the corner nicely, really helping to sell the need for the tag from O'Neil. Young certainly seems to be enjoying himself in the ring again, which was something that he seemed to miss during the later stages of The Prime Time Players heel run, which is understandable, seeing as they finally have some upward mobility in the tag team division again.

I thought the finish was also strong, with Rowan looking to interfere, during Young's frenzy off of the hot tag, only to be shoulder barged over the top rope by O'Neil. Just when it looked like The Prime Time Players might be going over, they pulled the switch with Harper hitting a big boot on Young and Rowan sending O'Neil into the barricade. Harper went on to hit a Discus Clothesline to get the pinfall victory for his team. I enjoyed the quickness of the switch they used here, really pulling the rug from underneath the viewer. The match was too short for either of these two teams to really show us what they could do, but they did the best with the time available. To close the show, Bray Wyatt entered the ring and hit Young with Sister Abigail before posing and reminding us to Follow The Buzzards! It's becoming a signature of The Wyatt Family's matches now to have Wyatt come in to take out the opponent again, I'm interested to see what happens when they lose.

So, it looks like The Wyatt Family is going to continue to roll on for now, but where exactly to. It would be difficult in their current state to have them go after the Tag Team Championships from The Shield, yes they could do heel team vs. heel team, it's been done before, but with The Shield so close to the Triple H/Randy Orton/Daniel Bryan storyline that's dominating WWE at the moment, I don't think it would really work right now. Yes, they could turn The Wyatt Family face, we've seen from their last appearance on NXT that it can work very well, but so soon after their debut, I just don't think it would feel right, especially with the feud with Kane still left open. I imagine they're going to be treading water for a while, until Kane is ready to return. The Prime Time Players on the other handed have been rumoured to be getting a Tag Title shot at Night of Champions, personally I think this match puts that match out of question, as if WWE were planning to have O'Neil and Young challenge for the titles, surely they wouldn't have them lose so close to the pay-per-view.


Elsewhere on Main Event, R-Truth took on World Heavyweight Championship Money in the Bank Winner Damien Sandow. Before the match, Sandow cut a nice little promo about Cody Rhodes' firing on Raw, which I thought was a nice touch. We've seen this match a handful of times before, most recently on Raw in June, and unfortunately this felt like the pair going through the motions. It's something I've noticed a few times with Sandow, and it's even more frustrating because I know when he does turn up he can put on a very good match, and I'm sure with the time given here with R-Truth they could have done so. That's not saying the match was awful, it was a decent contest, with a nice series of roll-ups being the highlight for me, but it just didn't seem like the effort was being put in to elevate this match from a decent match to a good match. Josh Matthews and Alex Riley on commentary didn't help the match much either, spending most of the match talking about Big Show.

The finish saw Sandow go for Terminus, with Truth pushing him into the ropes for a roll up for a near fall. Sandow then ran straight into a Little Jimmy to give R-Truth the pinfall victory. It was a nice finish, but I have absolutely no clue why they had R-Truth going over Sandow. They've done literally nothing with R-Truth on television for months, and it's obvious to anyone that R-Truth is going nowhere in WWE at the moment, and Sandow is holding the Money in the Bank briefcase and a possible future World Heavyweight Champion, so why would they have R-Truth win here? WWE seems intent on having Sandow lose to everyone on the roster before he cashes in his briefcase, and they'll have the same problem they had with Jack Swagger and Daniel Bryan when they were given similar runs with the briefcase. It would be nice if WWE would learn from their own mistakes in booking, and at least have Sandow looking competent in the ring.


The match that took the usual “Main Event” slot was Fandango going up against Justin Gabriel. No offence to Gabriel, I think he's a terrific in-ring talent but he just doesn't have the name value some of the usual wrestlers that get put in this spot have, mainly due to the fact he usually loses on television. The match itself was pretty sloppy throughout, including a horrible looking bump where Gabriel somersaulted over the top rope and landed on the back of neck and head, Gabriel certainly didn't look the same after that moment and was favouring his head for the rest of the bout. The finish saw Fandango hit a Pele Kick for a near fall, before heading to the top rope to hit the Diving Leg Drop for the pinfall victory. Personally, I would have rather seen Fandango go straight from the kick to the Leg Drop to get the pin, but the finish was decent enough. These two have had better matches on television before, and seeing as they've worked a few house shows together as well I was expecting a little better, but I guess a lot of it has to do with the head injury Gabriel suffered pretty early on.


My final thoughts on this week's WWE Main Event.

1. The Prime Time Players are really growing on me as a face tag team.

2. Damien Sandow should be winning more matches, although continuing to go through the motions won't help him.

3. I really, really don't like Josh Matthews on commentary
Posted by Unknown at 10:04