WWE Payback 2013 is out now on DVD and Blu-Ray, available at www.wwedvd.co.uk, priced at £12.99 for DVD and £13.99 for Blu-Ray. Broadcast live from the Allstate Arena in Chicago, Illinois, it featured a main event that saw John Cena defend his WWE Championship in a Three Stages of Hell bout against Ryback, as well as CM Punk's return to WWE against Chris Jericho and Dolph Ziggler defending the World Heavyweight Championship against Alberto Del Rio. You can check out our full event review of the show here...http://www.acrossthepondwrestling.co.uk/2013/06/wwe-payback-review.html 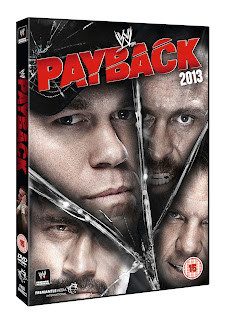 The History of The Shield, Team Hell No & Randy Orton

If I hadn't watched SummerSlam live a few weeks ago, I would have been mentioning that Payback was the PPV of the Year, so far, but just because SummerSlam was a little bit better, that doesn't stop this show from being very good. There is a lot for fans of WWE to enjoy here, and with matches that will be remembered for sometime, as well as a couple of battles that could quite possibly end up being forgotten gems, that you'll rediscover when you purchase this set.

Unfortunately, however the set is let down by it's main event contest. Whilst John Cena defending his WWE Championship against Ryback in a Three Stages of Hell match is a pretty decent match, it simply can not follow what has preceded it on the show and probably goes a little bit too long for what it is. There are some nice moment, like Cena jumping on to a whole host of wrestler in the Lumberjack match and a good exchange in the Tables match, whilst the Ambulance match struggles to get going with an over gimmicked ambulance putting a dampner on things. Maybe in isolation, this bout would be more enjoyable, but if have just watched the rest of the show, it is a little bit of a let down.

Now on to the more positive stuff, CM Punk vs. Chris Jericho. This was CM Punk's first match since losing to The Undertaker at this year's Wrestlemania. Anyone that watched Money in the Bank 2011, will know that when Punk is in his hometown of Chicago, the atmosphere is always fantastic, with the crowd unanimously behind The Straight Edge Saviour. The action is every bit as good as you would expect, with some hard hits and some exciting near falls. This is also the catalyst for the CM Punk and Paul Heyman feud that is still raging on television, with Heyman almost costing Punk the win. Definitely the match of the night.

Dolph Ziggler defending his World Heavyweight Championship against Alberto Del Rio is another top quality match up. With some really good work from both men, they manage to pull off a really nice double turn, with Ziggler walking out a face, due to some fantastic selling, and Del Rio leaving as a heel, helped along by nice promo from Del Rio later in the night. The bout plays well of Ziggler recent concussion, really playing at the heartstrings at points, and whilst it was a risky decision to use the concussion and have Ziggler take so many head blows, it paid of nicely and this is very strong match up.

Elsewhere, The Shield defend their Tag Team Championships against Team RK-No, in an exciting, storyline fueled tag team battle, where it's really interesting to see Randy Orton and Daniel Bryan teaming with the two now so pivotal in the main storyline in WWE. Wade Barrett defends his Intercontinetal Championship against The Miz and Curtis Axel in a decent triple threat match, where all three of the men gelled well together, as well a really nice finish. Kaitlyn defending her Diva's Championship again AJ Lee is my favourite main stream women's match this year, with strong wrestling and storytelling throughout, and it was really nice to see a decent women's match on WWE television after so long. Dean Ambrose defending his United States Championship against Kane is probably the weakest match on the card, but still not bad. It suffers from running too long and a poor ending that leaves more questions open than it answers.

The special features on the DVD are pretty disappointing. For some reason, WWE have decided not to include the solid Payback Kick Off match between Sheamus and Damien Sandow that would have been an excellent addition to the show. Instead, we get a short interview with CM Punk and Paul Heyman backstage, which is interesting but doesn't really add much to the show and a highlight video of the rivalry between The Shield, Randy Orton & Team Hell No, which is as usual well put together, but after watching the show already doesn't really add much to the production.

Overall, Payback was a very strong show, and certainly WWE's strongest event for sometime, with a lot of quality action to keep WWE fans satisfied. If you're considering not purchasing this show, because it isn't one of the big names, change your mind, this is an excellent showing and you will not regret having this one your DVD shelf.