After last week's interview with Wiggy, it's time to speak to Scottish wrestler Scott Renwick. 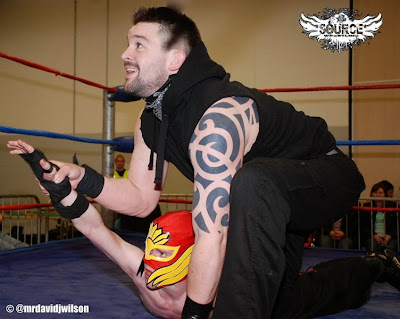 
1. When did you first get into wrestling and what drew you to the sport?


I have been watching wrestling all my life ever since I can remember. I’ve always wanted to even try wrestling but wasn't sure how or even where to start. I watched a WWE pay per view in March 2004 (Editor's note - Wrestlemania XX) I’m sure it was with a mate of mine, he mentioned that he wanted to try it too. By 9 am he found out where to train and said that we were starting in April 2004. Since then it was history, I then got my debut in August 2005. What drew me to the sport was the whole spectacle of it. I always wondered what it would be like to stand in the middle of the ring and hear your name chanted around an arena. I was always told by a lot of people, even my peers, the guys I trained with that I couldn't do it, that made me want it even more.


2. What is your current opinion of the state of British Wrestling and what do you think is the next step for the industry?


British wrestling is getting bigger and bigger week to week. Everytime you turn onto facebook or twitter, there is more big news to be heard, which is amazing, Scotland in particular is striving as of late, and every company within Scotland are working together to make wrestling huge. Every wrestler has something to give to the sport, and we are proving that fact with every show that is done here. The next step has to be TV of some sort, World of Sport had its time in Britain, now its our time.

3. If you could step into the ring with anyone from wrestling past, present or future who would it be and why?


This Is definitely a tough question because there are so many I would love to wrestle. my hero for a very long time has been Eddie Guerrero, so he would definitely be a number one choice for me. at the same time I'd love to step into the ring with a lot of the British guys too. Way too many people to name.


I shall tell you both my top 3 that I have been part of, and also my top three matches that I wasn't part of.

First, ones I was part of.

Matches I wasn't part of. in no particular order.

Shaun Michaels vs Razer Ramone in a Ladder match.

Triple H vs Undertaker at Wrestlemania in a Hell in a Cell match.


5. Where can our readers catch you in action next?

Right now, being honest I'm not too sure, I hopefully going to be able to make the SWE debut on August 24th, but I am actually injured just now, hopefully I'll be able to get back at it as soon as possible.

We'd like to thank Scott Renwick for this great interview.

Next time: King Bingus Wrestling
Posted by James at 19:30