ROH Reclamation Night 2 is out now on DVD and available from www.rohwrestling.com, priced at $19.99 (just over £12 plus shipping) Taped at the Ford Community and Performing Arts Center in Dearborn, Michigan, USA. Continuing on theme from Reclamation Night 1, this show puts the Tag Team Division as a focal point of the show, with a tag team main event pitting The American Wolves against Michael Elgin and Jay Lethal, alongside Tommaso Ciampa taking on Silas Young, Adam Cole battling BJ Whitmer and seven other matches. 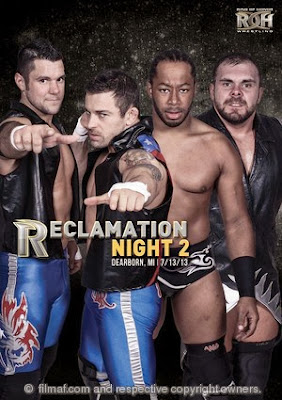 Kevin Steen vs. World Television Champion Matt Taven with The House of Truth (10:12)

Kevin Steen vs. Truth Martini with The House of Truth (4:40)

The second night of Reclamation had a lot to live up to, after the first night had provided a number of top quality contests. In a number of ways, this show struggles to do so, with the bouts notably shorter than the night before, and only the main event really managing to stand out amongst the card.

The main event of Jay Lethal teaming with Michael Elgin is exactly what you would expect from these four top ROH talents. It's a typical ROH style tag team bout, with plenty of action throughout. There are some quality sequences in the middle of the bout, with all four men getting involved in a series of moves, which look equally beautiful as they do choreographed. The only downfall of this match for me, was a slight pacing problem in the final third of the match, but the closing sequence quickly makes up for that. This works perfectly as the main event of the show and is certainly the best match on the card, showing that tag team wrestling can easily be the focal point of the show, hopefully ROH continues it's push on tag teams going forward.

Tommaso Ciampa's meeting with Silas Young is a solid outing, with a lot of good back and forth action. There's also some well worked spots thrown in as well, with a German Suplex onto the concrete being the highlight of the bout for me. Unfortunately, this one is let down by the finish, which feels more like WWE than ROH, and sets a precedent that the company can't really keep up. It will be interesting to see if ROH hand Young a contract soon, he's been in a string of impressive matches and could be an interesting addition to the full time roster.

Adam Cole vs. BJ Whitmer is hurt by an early botch, that effects the rest of the match. The two don't seem to connect at all in the ring, with a lot of awkward moments throughout. After Whitmer seemingly suffers a head injury due to the botch, Cole noticeably works weak when using moves around Whitmer's head, which is understandable, but the basic ROH camera set up lets him down, as at times it's so clear that he isn't connecting that it pulls you straight out of the match. There are some positives to this bout however, a solid combination of suplexes from Whitmer works very well, whilst the finish continues the build toward Cole's heel turn, which is gathering momentum nicely by this point.

Kevin Steen and World Television Champion Matt Taven have an entertaining encounter, with Steen dominating amongst a number of comedy spots. The finish leads to Steen calling for an impromtu match with Truth Martini, which is another comedy bout, that serves it's purpose well. World Tag Team Champion Bobby Fish takes on ACH in a high octane encounter, that would have benefitted from a little extra time. Fish's partner in reDRagon, Kyle O'Reilly takes on ACH's Adrenaline Rush partner, Tadarius Thomas is similarly effective in the time slot given, with a series of different strike sequences being the highlight. Michael Bennett runs through Andy Muscant in what is essentially a squash match, before Rhino stops Bennett inflicting further punishment, effectively turned Rhino face, and the two put on a decent short contest. A Women's Four Way bout featuring MsChif, Athena, Leah Von Dutch and Jenny Rose, is a lot of fun, especially once all four women get involved, with Von Dutch and Rose more than holding their own with the ROH regulars.

The special features included a Q&A session with Nigel McGuinness prior to the show, which sound quality much improved from the night before and including an entertaining appearance from Jimmy Jacobs. The Post Show Recap is short and ultimately a little pointless. It would have been nice to see the show dark match appear as an extra, as on the previous night's DVD, as well.

Overall, there is a lot of good action on this show, with the main event especially really standing out. However, it can't quite stand up to the night before, and never really feels like anything of importance is actually happening.