We're going to try a different format for these show reviews and see how it works out. If it doesn't work we'll flip back to the “Match of the Day” format, but for now we'll simply be running through each show and giving thoughts.

So, Battleground Kick-Off started with Josh Matthews welcoming us to the 1st Niagra Centre in Buffalo, New York, USA. Matthews was the host of the specialist panel for tonight's Kick Off show, which featured an underwhelming collection of panelists, with The Miz, Titus O'Neil and Tensai all on hand. They ran through a collection of bouts including Daniel Bryan vs. Randy Orton for the vacant WWE Championship, The Rhodes Family vs. Tag Team Champions The Shield and Rob Van Dam going after Alberto Del Rio's World Heavyweight Championship in a Battleground Hardcore Match. This panel was painfully awkward, with only Tensai seemingly knowing what he was talking about, with a lot of hesitation and confusion from both Miz and O'Neil. They finished up this segment, by really pushing the idea that Damien Sandow could cash in his Money in the Bank briefcase tonight to become World Heavyweight Champion, but after the booking he's received over the last few months, I'm wondering why I'm supposed to care if this happens. They quickly skimmed over the random bout that was occuring on the show, with Sandow facing Dolph Ziggler, despite the two having very little interaction on television, like ever!

We then head to Renee Young, in the “Social Media Lounge”, which is essentially a sofa and a television. Young capably leads us through how to use a hashtag on Twitter, before talking about how both Daniel Bryan and Brie Bella could walk out of Battleground with gold (or a butterfly atleast) around their wastes. I'm not a massive fan of them using Brie as part of Bryan's storyline, for a number of reasons, firstly because Brie can't act to save her life, secondly it shows that WWE don't really know what their audience likes, and placing a popular character like Daniel Bryan, with a shall we say not so popular character like Brie Bella, just doesn't work. Yes, I know they are a real life couple, and that WWE wants to promote Total Divas more, but I'm not sure if theres much crossover between the viewers of Total Divas and WWE's other programming. The segments finished with Young introducing a WWE.com poll to find out who was WWE's best power couple, with the options being Triple H & Stephanie McMahon, Edge & Lita, Randy Savage & Miss Elizabeth and King Booker & Queen Sharmell. I find it's best not to think too much into these selections.

Josh Matthews then moved discussion onto the CM Punk vs Ryback later on, with them showing a replay of last weeks tremendous Raw segment where Paul Heyman “proposed” to Ryback, followed up by an attack from Punk. Matthews went onto interview Heyman who was accompanied by Ryback, with Heyman once again giving a top quality promo, attempting to portray Ryback as an underdog, claiming that Punk was a bully and that the WWE fans had been brainwashed to follow him. It was short, but sweet and gave a good idea of what to expect later on when Ryback got in the ring with Punk. 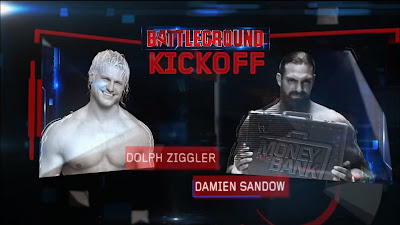 It was then time to head down to ringside, where our commentary team for the evening would be Michael Cole, Jerry Lawler and JBL. They briefly talk about Rob Van Dam and Alberto Del Rio's World Heavyweight Championship bout later on, before seguing onto the idea that Damien Sandow could cash in his briefcase tonight, they're really pushing that idea tonight after weeks of ignoring the fact. Out comes Damien Sandow, mic in hand and cuts the kind of promo we've come to expect from the Intellectual Saviour of the Masses. Sandow quoted Benjamin Franklin, before moving onto to talk more about potentially cashing in his Money in the Bank briefcase, personally I would've preferred to hear him talk more about his opponent, rather than everyone continue to sign post a cash in, the promo only proved that this match was entirely pointless.

I can't say I was particularly enamoured with this contest, Sandow and Ziggler just didn't seem to connect in the ring, in what was there first singles match together. The early part of the match especially just didn't seem to flow correctly, with a slow motion replay of a Sandow clothesline that obviously didn't connect and a botched swinging neckbreaker from Sandow not helping the situation. This bout needed some kind of story to draw me into the match straight away, seeing as it had no storyline heading in, and it just wasn't present. The bout did pick up towards the end, when the action gathered some pace, with a succession of pin variations getting near falls for both men. I thought the finish was also strong, when a remnant of a story appear with both men tweaking their knees, before Ziggler slipping out of a powerslam attempt by Sandow, landing a kick to the knee before hitting a Zig Zag to pick up a pinfall victory. Personally, I think Sandow was the one most in need of a victory here, as he's been made to look pretty rubbish since winning the briefcase, and at the most will not make a realistic World Heavyweight Champion, and the loss wouldn't exactly harm Ziggler who is already over with the audience.

After a replay of The Shield's attack on the Rhodes Family on last week's episode of Raw, which was oddly for WWE pretty poorly edited together, we headed back to Josh Matthews for the opinions of the panel. Once again, it was a pretty cringeworthy experience, with Miz and especially O'Neil completely butchering what they had to say, luckily Tensai kept his words short, wishing the Rhodes Family good luck. It seemed a strange decision to have an all face panel, especially with Triple H in charge of WWE, it would have given more balance to the panel.

Then we moved on to the always exciting “Social Media Lounge” where Renee Young read the most generic tweet I have ever heard about Daniel Bryan. She was then interupted by Los Matadores miniature bull, El Torito, who ran around the lounge and appeared to be making sexual advances on Young. It was a little bizarre, and I really want to hate Torito, but this was pretty funny, with Young doing a good job of awkward confusion, although she may have just been awkwardly confused. The segment finished with a reveal of the results of the WWE.com vote for WWE's best power couple, with Edge & Lita winning with 43%, Triple H & Stephanie McMahon coming second with 30%, Randy Savage & Miss Elizabeth in third with 23% and King Booker & Queen Sharmell bringing up the rear with 5%, like I said before it's best not to think about these too much, it's just a bit of fun.

They finished up the show by replaying Randy Orton's attack on Daniel Bryan from last week's Raw, where Brie Bella looked on, with each of the panel giving their opinions on who would pick up the victory, with Tensai even donning a fake beard and failing at getting the crowd to chant “YES!” which is quite an achievement in today's WWE.


Overall, I didn't think Battleground Kick-Off was much good, a difficult bout between Dolph Ziggler and Damien Sandow and a biased and un prepared panel didn't exactly make me want to watch Battleground anymore, although they did do a good job of promoting that the first match would see Rob Van Dam face Alberto Del Rio for the World Heavyweight Championship.
Posted by James at 21:48