WWE's The Best of WWE at Madison Square Garden is available on both DVD and Blu-Ray now from www.wwedvd.co.uk, priced at £19.99 for DVD and £22.99 for Blu-Ray. The unique set looks at a collection of WWE matches and moments that have occurred within Madison Square Garden in New York. There is a broad collection of matches on this three disc DVD set goes from Ivan Koloff taking on Pedro Morales in February 1971, all the way up to Triple Threat Tag Team match between Jeri-Show, D-Generation X and John Cena & The Undertaker. 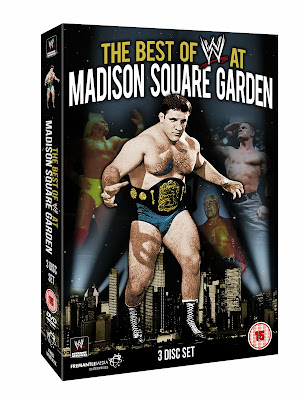 A Date Forever Etched in History

Under The Iconic Lights


I thought that this was a really enjoyable set to watch, with a lot of memorable moments packed throughout the three discs. However, those memorable moments are, of course, recycled from other sets. How many times has the main event of the first Wrestlemania been slapped onto a three disc set? Whilst, pretty much every match included is a worthy inclusion when looking at the subject matter, it does make you think that maybe WWE could have been a bit more imaginative when coming up with a title, one that would have perhaps presented a lot more new footage than this one presents. If you are die-hard collector of WWE DVD's then you will ultimately be disapointed at the amount of repeats on offer here. If your new to the game, then there is still a hell of a lot to enjoy.

The first disc takes us from 1971 to 1984, with a number of classic encounters, that are fascinating when compared to the action that we get today. A lot of these bouts are lengthy athletic encounters with a much more empathis on the sports elements of wrestling, rather than entertainment. Some of the footage is a little grainy and at one point the footage seems to loop with the commentary continuing as if nothing has happened, which is a little odd. With some bouts containing no original commentary, Jim Ross steps up to talk about Billy Graham's encounter with Bruno Sammartino, whilst Matt Striker is present for Harley Race against Bob Backlund. At time's both commentators slip between tenses which is a little confusing when you are trying to keep up with the action. The gem of the first disc for me is a bitter and bloody Bootcamp match between Sgt. Slaughter and Iron Shiek which really is something to behold, especially when put into the context of the story.

Disc 2 follows on, going from 1985 to 1994, starting with Rock N' Wrestling Era in full swing, as the first Wrestlemania main event see's Hulk Hogan pair with Mr. T to take on Roddy Piper and Paul Orndorf in an overused bout on these DVD sets, it might be historic, but it's really not that good. The Miz randomly turns up to talk about The Ultimate Warrior, before a flurry of classic Intercontental Championship matches. Whilst a Warrior beating the Honky Tonk Man in a few seconds feels a bit wasteful, Bret Hart against Mr. Perfect from Summerslam '91 and Shawn Michael's Ladder Match with Razor Ramon are welcome, if not tired, additions to the set. One of my favourite bouts included here is Diesel's WWF World Heavyweight Championship victory over Bob Backlund, whilst it is a very short encounter of only a few seconds, the fact that this bout actually occurred at a house show makes it quite special to watch.

The final disc moves from 1996 to 2009, with a mixture of memorable moments, alongside some questionable decisions. The Traditional Survivor Series match from 1996 may have been The Rock's (then Rocky Maivia) WWF debut, but the bout itself is a little ropey and a little too long for what it is. Stone Cold's first Stunner on Mr McMahon, Booker T attacking the aforementioned chairman and Triple H's return in 2002, are all included in their entirety, reminding us that when Raw rolls into Madison Square Garden something special happens. Triple H and Cactus Jack's Fall's Count Anywhere match is another much repeated outing, whilst The Hardys and Dudleys Table Match from Royal Rumbe 2000 is a forgotten classic in their storied feud. John Cena's United States Championship match with Big Show from Wrestlemania XX and his 2008 Royal Rumble win both feature an incredibly over Cena, which isn't something you see a lot of in today's WWE. The final match of a busy triple threat tag contest with D-Generation X, Jeri-Show, Cena & Undertaker is a decent bout, but is little more than build for that year's Survivor Series, it would have been nice to see a more recent moment included to close off the DVD set.

Matt Striker is the host for this set, in what must have been one of his last projects for WWE. He is an enthusiastic host, providing a nice local insight, even if he is only seen at the start of each disc and the end of the set. The interviews before each match provide a nice nostaglia boost heading into each match, with a lot of repeated sentiment about the arena. Only two interviews stand out as out of place, those being The Miz and Daniel Bryan, The Miz pops up to talk Ultimate Warrior vs. Honky Tonk Man, whilst Bryan appears before a triple threat between Triple H, Kurt Angle and Chris Jericho, but doesn't actually discuss the match!

Overall, this set is thoroughly enjoyable and features a lot of variation in style throughout. I found it interesting to watch the WWE develop as the Garden itself develops over the set. The match selection is strong, with most matches deserving their spot on the set, the only real match missing here is the main event of Wrestlemania XX, which is omitted for obvious reasons. However, if you do buy a lot of WWE DVD's you'll probably find that the best matches on this set are ones that are already included in your collection.