WWE's Goldberg: The Ultimate Collection is out now on DVD and Blu Ray, available from www.wwedvd.co.uk, currently priced at £19.99 for DVD and £22.99 for Blu Ray. The three disc set, chronicles Goldberg's career in WCW between 1997 and 2001, as well as his brief stint in WWE in 2003/04, with some the former WCW & WWE World Heavyweight Champion most remembered matches compiled together for the first time, including bouts with Hulk Hogan, Diamond Dallas Page, Kevin Nash, Sting, Sid Vicious, Chris Jericho and Triple H. 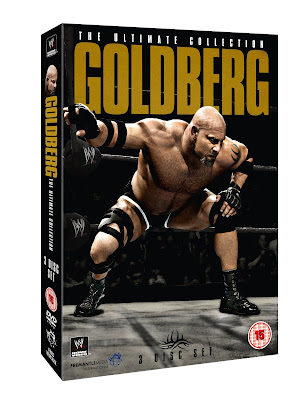 Exploding Onto The Scene

Setting His Sights On A Bigger Prize

The Road To Starrcade

The Face of WCW

Two Matches In One Night

Making His Way To WWE

Another Shot At The Title


Let me start this review by saying that if you are/were a fan of Goldberg, you will most likely absolute love this set no matter what I have to say about it, you'll get a heavy dose of nostalgia, alongside seeing one of the most dominant main stream wrestlers in recent memory, doing (mostly) what he did best, but I personally had a number of hang-ups with this set.

Goldberg's matches were usually pretty short (hence the large amount of matches included on this set) and extremely formulaic, so watching match after match can become tiresome quickly and it does. Whilst the first disc highlights the incredible popularity of Goldberg, mostly down to some clever booking by WCW at the time, seeing what is essentially the same match repeated with different opponents, with Goldberg's lengthy entrance present on every single match, means that this one becomes difficult to watch in a reasonable number of sittings. There are some decent matches present on Disc 1, like a Halloween Havoc encounter with Diamond Dallas Page that tells a nice story, and World Heavyweight Championship victory over Hollywood Hulk Hogan is notable for the crowd reactions and the fact it was given away on free television. The first disc finishes off with Goldberg's awfully booked World Heavyweight Championship defeat to Kevin Nash, and all the good work that had been done in protecting Goldberg was thrown out of the window.

Disc 2 picks up where Disc 1 left off, as WCW has no idea how to book Goldberg after his streak is gone. There's a complete mess of a Four Way with Hogan, Page and Ric Flair from Nitro, a disappointing rematch with Diamond Dallas Page at Fall Brawl '99, a bizarre second World Heavyweight title run after stepping in against Sting, and a tame "I Quit" bout with Sid Vicious, with neither coming close replicating the feel of Goldberg's original rise to fame, this disc at times was painful viewing. Luckily, it is surprisingly saved by a stellar No Disqualification encounter with Scott Steiner from Fall Brawl 2000, which whilst far from a technical classic has nice story to tell, and even an appearance from Vince Russo doesn't stop this from being, arguably, the best match Goldberg ever had.

Disc 3 moves onto Goldberg's 2003/04 run in WWE. These matches tend to be a lot longer than the matches on the first two discs, although this doesn't necessarily mean that the match quality is any better. The disc is bookended by two matches that are more style than substance, as Golberg takes on The Rock at Backlash 2003 and Brock Lesnar at Wrestlemania XX, both could have benefitted from having time shaved off, luckily the crowd saves the bout with Lesnar with some hilarious chants. Luckily, their are some half decent matches sandwiched in between these two, with bout with Chris Jericho at Badd Blood, coming in at just the right length, with Jericho proving that he probably could have a watchable match with just about anyone (except Ryback). The Elimination Chamber bout from SummerSlam is a nice change of pace, even if the booking is questionable, there is some nice action presented, with Goldberg looking like a beast throughout. His World Heavyweight title bout with Triple H is diminished by a silly gimmick that signposts the finish, while a rematch isn't much better, whilst the inclusion of matches from Raw against Mark Henry and Batista are questionable inclusions, due to their open finishes, leaving the last disc looking a little thin on the ground.

Interspersed throughout the set is some random segments that detail certain storylines leading up to big match, such as the Georgia Dome bout with Hogan. It would have been nice to see a little more of these, and little less of Goldberg's entrance which takes up a lot of time, because a lot of these bouts suffer from a lack of context which makes them even harder to get into than they originally were.

Overall, I really struggled to watch this set, as whilst there as some decent matches present, they are few and far between, with most of the bout being very similar in structure. However, there is a nice nostalgia feel about the set, with some interesting historical moments included and there isn't really anything missing from the set, as it lives up to it's name of The Ultimate Collection. If you're a fan of Goldberg, then by all means go out and get this set, you will enjoy it. If you aren't, and prefer to see a bit more variety, this might not be the set for you.