I've been a little bit behind on DVD's recently, but plan to blast through a couple reviews this weekend starting with this on WWE's release of Legend of Mid-South Wrestling.

WWE Legends of Mid-South Wrestling is available now on DVD and Blu-Ray, from www.wwedvd.co.uk, priced at £19.99 on DVD and £22.99 on Blu-Ray. This is the first time that WWE Home Video has delved into the archives of Mid-South Wrestling/UWF, with this set presenting a series of the promotions biggest matches, moments and storylines. Expect appearances from some of the biggest stars of the era, like Ted DiBiase, Junkyard Dog, Jim Duggan, Magnum TA and many more in action. 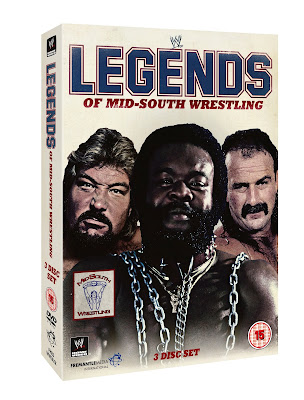 Travel of the Territory

A Painted Dog
Mid-South Wrestling, May 1984

Jim Cornette in a Straight Jacket
The Rock N’ Roll Express vs. The Midnight Express

I have to be honest and say going into this set, I knew very little about Mid-South Wrestling. I had, of course, heard of the promotion and a lot of the talent on this 3 disc set was familiar to me, but apart from that most of what this set presented was completely new to me, as I will suspect it will be to a lot of people who pick this one up. The good news is, that Legends of Mid-South Wrestling does a great job of introducing the audience to the promotions product with a host of interviewees, including Jim Ross, Bill Watts and Ted DiBiase amongst others, giving a great insight to the business at the time, as well as focusing in on individual wrestlers and storylines, which brings an extra dimension to the match that follows.

The things that comes across strongly whilst watching this set is the quality of the booking, that seemed to around the promotion in the years focused on, with the storylines being outlined in the interviews and some footage before the bigger match(es) of the feuds are shown. This means that what sounds like an awfully over stipulated bout in Jim Duggan and Ted DiBiase's "Coal Miner's Glove Steel Cage Tuxedo Loser Leaves Town Match" turns about be a very enjoyable piece of action, with strong psychology and the hatred between the two men jumping off the screen.

On this note, a lot of the bouts here are a lot more psychology based than they are in technical wrestling, which is absolutely fine in my opinion, with the wrestlers working to get reactions out of the crowd from little things, instead of relying too heavily on flips and tricks to get easy pops. The charismatic nature of the company's workers allows them to be able to this, with Junkyard Dog, who no one would call a great technical wrestler, being a prime example, and this set certainly put's him up there as one of the best babyface's off all time in my mind, with a lot of footage of JYD's feud with Butch Reed included here.

Most of the matches feel like they belong on this set, but the format of focusing on specific wrestlers does at time seem a little thin on the ground. Shawn Michaels' bout with Ted DiBiase, is mildly interesting after Michael's story about how DiBiase allowed him to get a few moves in, but doesn't stop the bout from being a simple squash, and is a clear example of WWE including a bout so that they could include another big name in the promotion material. Similiarly out of place squash bouts, like a young Rick Steiner (going by the name Rob Ricksteiner) taking on future referee Nick Patrick, and The Bladerunners (the future team of Ultimate Warrior and Sting) bout with John O'Reilly and Ken Massey, is another case of name value overpowering the actual content.

At times, the footage is not of a great quality, particularly during a lengthy NWA World Heavyweight Championship bout between Ric Flair and Terry Taylor, as well as during the feud closing match between Mr. Wrestling II and Magnum T.A.. Both are enjoyable bouts in different ways, but the quality makes it difficult to completely get into what you're watching, especially when up on a large television. It would be interesting to know what kind of restoration work WWE Home Video does when putting these sets together, as it doesn't seem to be as through as a lot of other restored video I've seen around recently.

Overall, I would recommend Legends of Mid-South Wrestling to any wrestling fan out there. The wealth of footage contained here is strong enough that no prior knowledge of the company is particularly needed to make this an enjoyable watch, and it's a great way into a promotion that hasn't had the same over-exposure that we've seen from the likes of repeated WCW and ECW releases. Grab it now, you honestly won't regret it.