WWE SummerSlam is out on DVD and Blu-Ray now, available from www.wwedvd.co.uk, priced £12.99 on DVD and £13.99 on Blu-Ray. Broadcast live on Pay-per-View from the Staples Center in Los Angeles, California, USA, on the show is main evented by John Cena defending his WWE Championship against Daniel Bryan, alongside Brock Lesnar's clash with CM Punk and a World Heavyweight Championship encounter between Alberto Del Rio and Christian, as well as five other bouts. The commentary is provided by John Bradshaw Layfield, Michael Cole and Jerry Lawler. 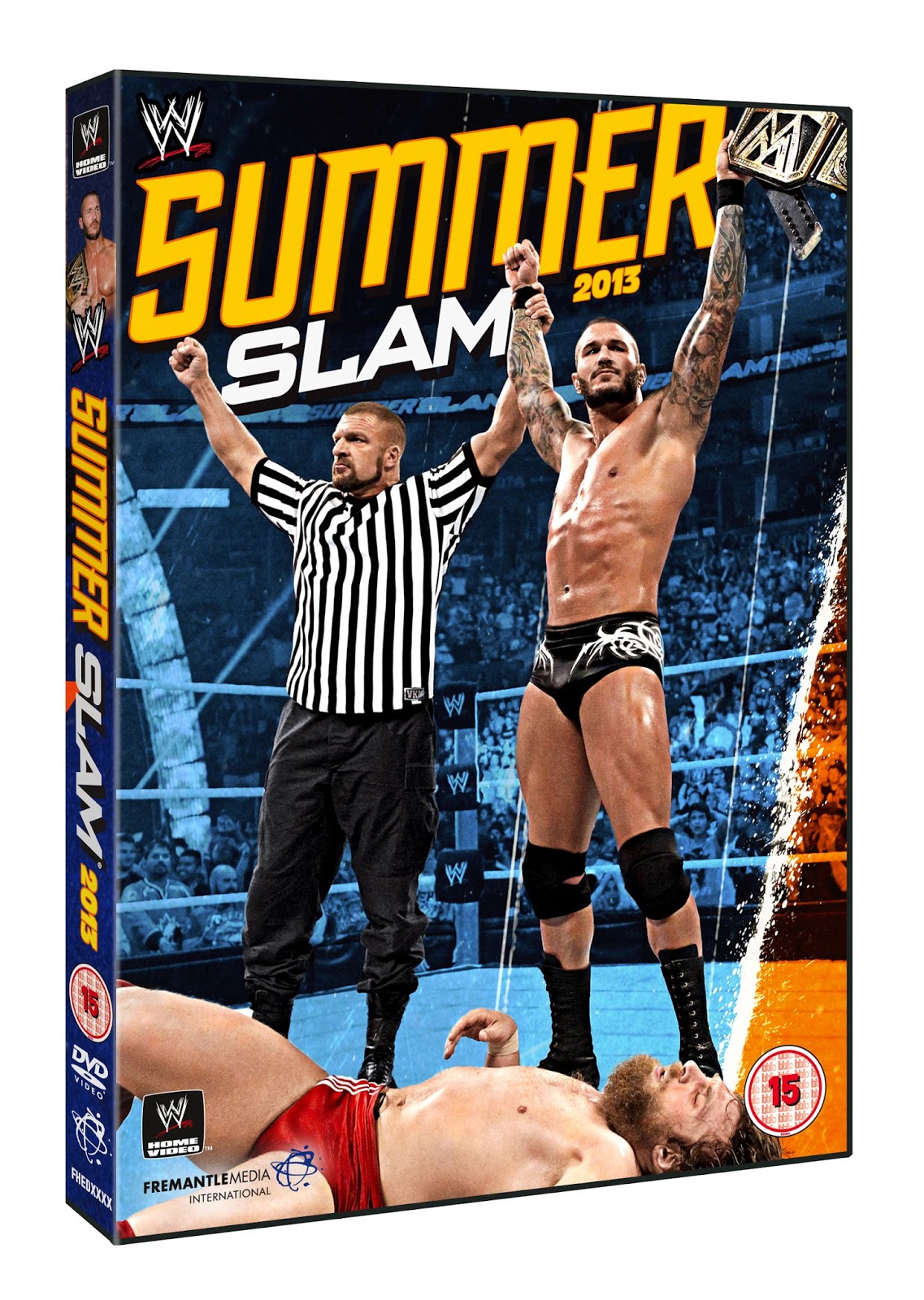 Ring of Fire Match
Bray Wyatt (with The Wyatt Family) vs. Kane

There's a reason that this PPV was voted ATPW Event of the Year 2013 by our readers, and that's because it's a bloody good PPV!

There's two very good matches on this card, alongside some solid performances from the rest of the card. The main event pitching WWE Champion John Cena against Daniel Bryan is a masterfully told story of the underdog fighting from underneath, with both men playing their roles to near perfection throughout the contest, with John Cena coming the closest to playing a heel since his One Night Stand 2006 bout with Rob Van Dam. There's plenty of good wrestling and a number of interesting reversals, which allows the story to be placed on top nicely. Special Guest Referee Triple H's involvement is kept to a minimum during the bout, although a twist at the very end of the show will have you asking for more, as The Authority angle begins to take shape. (Yes, I am aware it's spoiled on the cover of the DVD, but I try to keep these DVD's Reviews as spoiler free as I can)

For me however, the match of the night is a thrilling No Disqualification encounter between CM Punk and Brock Lesnar, that was build as "The Best vs. The Beast". This match is brutal, with steel chairs, kendo sticks and the steel steps coming into play, as CM Punk's David tries to topple Lesnar's goliath. This match also features on of the best submission sequences that WWE has ever produced, with realistic selling and strong reversals really pulling you into the action on the screen. The real story behind the bout is Punk's attempt to get out his old friend Paul Heyman, who is at ringside for Lesnar, with Heyman bringing that extra bit of edge to the contest to make this one something quite special. In my opinion, this was the best match in WWE in 2013.

In the World Heavyweight Championship match, Christian and Alberto Del Rio put on a strong bout that unfortunately got overshadowed by the two headline matches. This match however is an absolute pleasure to watch, with strong storytelling as Del Rio works Christian's arm, whilst Captain Charisma sells the injury like his life depended upon it. The bout builds nicely with strong chain wrestling and a number of near falls, with Christian's facial expressions after each near fall showing how much the World Heavyweight Championship means to Captain Charisma. The finish is satisfying and clever working on the themes that had previously been presented in the bout. I've said it before but this match will become a forgotten treasure.

Elsewhere, the first ever Ring of Fire match between Kane and Bray Wyatt is more style than substance, relying on the spectacle of the fire with some daft storytelling. Dolph Ziggler teams with Kaitlyn to take on Big E Langston and Diva's Champion AJ Lee in a half-decent mixed tag team encounter that would signal the end of their feud. Cody Rhodes and Damien Sandow's battle is short, but sweet singles encounter that would have benefited from another five minutes and a women's match between Brie Bella and Natalya used to promote Total Divas is better than expected, but still not great.

The Miz was apparently "The Host of SummerSlam" in an angle that I had almost completely erased from my memory. The Miz pops up in segments throughout the show getting in various irritating scrapes with Fandango and Summer Rae, whilst Maria Menounous turns up as well, leaving me once again asking the question "Who are you?". There's also some backstage action from the ever-popular Ryback, who pours cold soup on some guy, as the Bully Ryback character developed (and was soon forgotten).


The sole extra on this DVD is a United States Championship match from the SummerSlam Kick-Off that see's Dean Ambrose defend the title against Rob Van Dam. For some reason the match is joined in progress, which instantly sets things out of kilter, as Big Show and Mark Henry seem to be there for no reason at all. There is some decent action here, but it's nothing spectacular. For what is supposed to be WWE's second biggest PPV, I would have expected some more extra content on this DVD, at least a handful of backstage interviews.


Certainly one of, if not the strongest WWE PPV of 2013, with two match of the year candidates in Cena/Bryan and Lesnar/Punk, as well as shock ending that saw Twitter explode in rage! If your a WWE fan, or even someone who has fallen out of love with the product as of late, buy this DVD to remind yourself that WWE can still produce compelling and exciting action in 2013, and hopefully we'll see more PPV's like this in 2014.


My Top Three Matches on SummerSlam 2013