WWE Battleground 2013 is out on DVD and Blu-Ray now, available from www.wwedvd.co.uk, priced £12.99 on DVD and £13.99 on Blu-Ray. Broadcast live on Pay-per-View from the First Niagra Centre in Buffalo, New York, USA on 6th October 2013, the show is main evented by Randy Orton and Daniel Bryan competing for the vacant WWE Championship, alongside Alberto Del Rio defending his World Heavyweight Championship against Rob Van Dam in a Battleground Hardcore Rules match and CM Punk taking on the newest Paul Heyman guy, Ryback, as well as five other matches.  The commentary is provided by John Bradshaw Layfield, Michael Cole and Jerry Lawler. 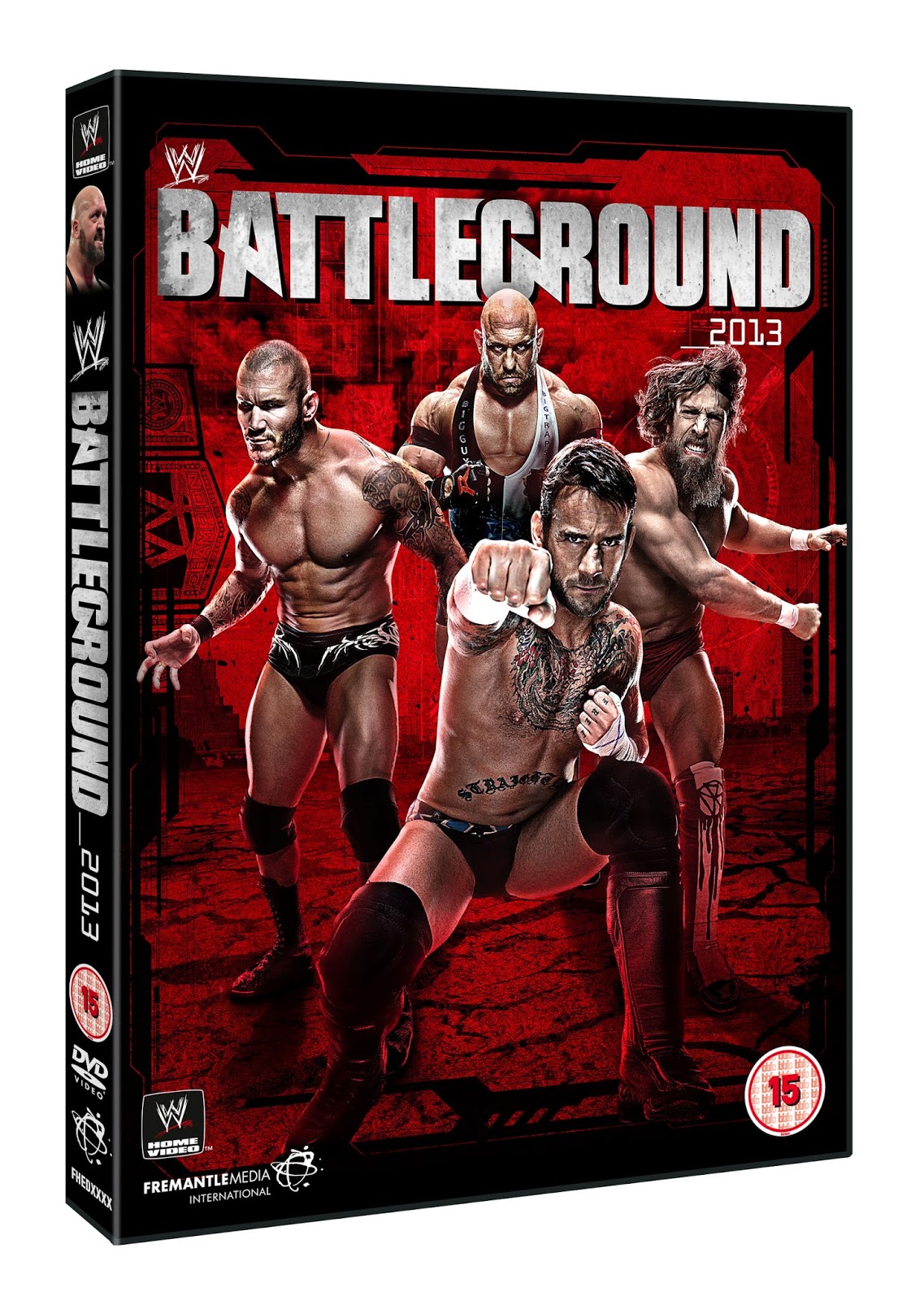 Another WWE PPV that left a sour taste in the mouth. The main event of Daniel Bryan against Randy Orton for the WWE Championship is all about the finish, meaning twenty minutes plus of good quality action feel pretty pointless as soon as you notice what's happening and the show is over. The action before is very very good, with Orton and Bryan continuing to connect well in the ring. After the finish to Night of Champions, WWE really needed to deliver something concrete here and that is not what you get with this main event.

Rob Van Dam challenging Alberto Del Rio for the World Heavyweight Championship in an Battleground Hardcore Rules match is a lot of fun. There isn't a lot of wrestling, but this one is all about the spots and those spots are performed well enough to make this a decent watch. CM Punk against Ryback is a mixed bag, Ryback looks good when on the attack, but just terrible when Punk get's rolling. The storyline elements with Paul Heyman are entertaining, but the action with Punk and Ryback is pretty dull.

Goldust and Cody Rhodes taking on The Shield's Seth Rollins and Roman Reigns for a chance at WWE contracts is by far the best match of the show. It's easy to get emotionally involved in the contest, with a superb video package prior aiding that fact. Twists and turns and plenty of reversals, this match flys by. Bray Wyatt taking on Kofi Kingston is a decent, if insignificant match, with Wyatt and Kingston doing a good job on getting the crowd on side. Curtis Axel's defending the Intercontinental Championship against R-Truth is hard to get behind, with neither man particularly bringing anything exciting to that action, this feels much more like a TV bout than PPV. A filler match see's The Real Americans taking on The Great Khali and Santino Marella in a mildly entertaining comedy bout, but there is no reason for it to be on PPV. Diva's title action between AJ Lee and Brie Bella rounds of the matches on this one, it's better than you might expect but still not great.

There is a surprising amount of DVD extras on this one. Kicking off with a dire contest between Dolph Ziggler and Damien Sandow from the Battleground Kick-Off show, there was nothing to draw me into this one, although the finish is nice. Interviews with Rob Van Dam and Randy Orton are nice inclusions to follow on from the action of the PPV. The Shield's bout with Daniel Bryan, Goldust and Cody Rhodes from Monday Night Raw is also included, and it's probably one of the best matches on this DVD! Lots of exciting action and everything we've come to expect from a Shield Six Man tag. Finally, Renee Young interviews Big Show the same episode of Raw, but that might be spoilers for the main event!

Overall, this PPV doesn't offer a lot. The Shield against Cody Rhodes and Goldust is stellar action and the DVD extra with  The Shield against Rhodes, Goldust and Daniel Bryan is also a solid bout, but they aren't strong enough or long enough to spill your hard earned cash on alone. The awful finish to the main event, alongside a lot of filler bouts that probably wouldn't raise your attention on an episode of Raw or Smackdown are the main problem with this one. Another one for the completists, I think.