WWE's History of WWE: 50 Years of Sports Entertainment is out now on DVD and Blu Ray, available from www.wwedvd.co.uk, currently priced at £19.99 for DVD and £22.99 for Blu Ray. The three disc set, chronicles the history of WWE over the last 50 years, with the first disc comprissing of a documentary feature and the second and third looking at the most important matches and moments from the last 50 years, expect appearances from some of WWE's biggest names including Shawn Michaels, Chris Jericho, CM Punk, Bret Hart and Bruno Sammartino! 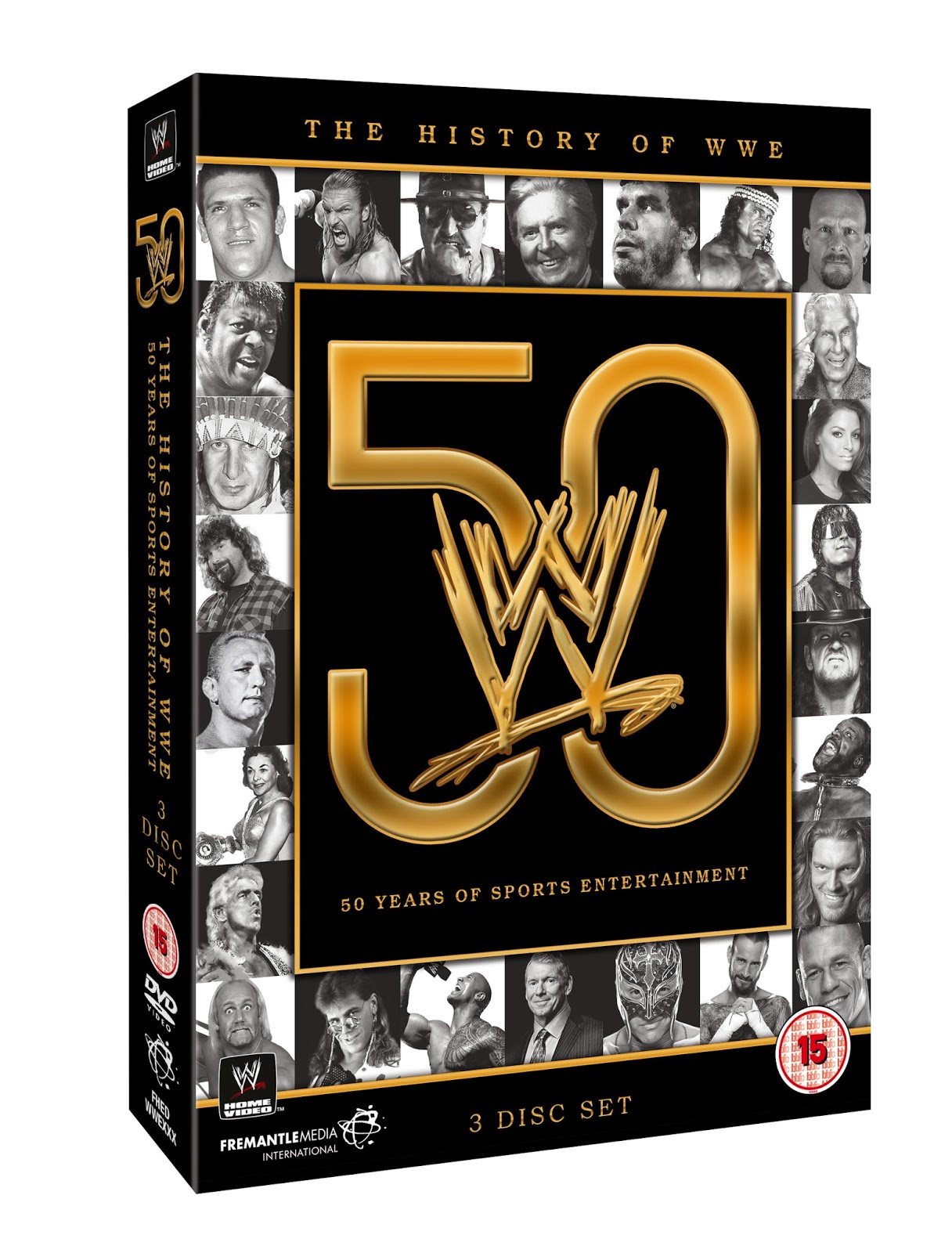 Royal Rumble Match
Jim Duggan vs. The One Man Gang vs. Dino Bravo vs. Don Muraco vs. Ron Bass vs. The Junkyard Dog vs. The Ultimate Warrior vs. Danny Davis vs. Hillbilly Jim vs. Nikolai Volkoff vs. Jake Roberts vs. B. Brian Blair vs. Bret Hart vs. Sam Houston vs. Jim Neidhart vs. Jim Brunzell vs. Harley Race vs. Boris Zhukov vs. Tito Santana vs. Butch Reed
WWF Royal Rumble, 24th January 1988,


The main feature of this DVD set is a two hour long documentary focusing on the history of WWE. At first, I was skeptical about how well the DVD would do in condensing down 50 years of WWE history into just two hours, but this set does actually do pretty well, cherry picking some import moments and eras throughout WWE history and presenting them alongside interviews with numerous WWE personalities from past and present. The list of interviewees is really quite astounding and you'll be surprised by some of the names that pop up during the documentary, each giving a good insight into the era that is being talked about. The glaring omission however would have to be Vince McMahon himself who isn't interviewed for any of the documentary, instead we are given insights on how he was feel from Linda and Stephanie McMahon, which at times feels jarring.

It, of course, should go without saying that this set is very well put together, as one would expect from anything with the WWE logo slapped upon these days. Everything runs extremely smoothly with the interviews and clips flowing well into another, making this a very easy watch. Whilst a lot of the information isn't new for anyone who has payed much attention to WWE over the years, there are some nice touches and flourishes in the interviews, especially a lot of the earlier stuff. I found Jimmy Valiant's interviews were always interesting, alongside people you may not even have of like the fella that rang the bell in the Montreal Screwjob!

The documentary covers all the main areas that you would expect, as well as some that you wouldn't, such as the Steroid Scandal of the earlier 90's or the death of Owen Hart in 1999. These areas are covered fairly well, with some good footage from outside the WWE library, although it could be argued that an outside source would have given a more balanced point of view on these incidents. It could also be argued that by including these stories, that WWE should perhaps have also covered other scandals that have swept the company such as the Online Pharmacy scandal of 2006. However, this is nit-picking as this is a very enjoyable documentary feature.

The only other criticism I have for the documentary feature is when the documentary covers the debuts of television shows such as Raw or Smackdown, when highlight packages of the entire run of the shows are shown. So you go from the 1993 debut of Raw, to seeing stuff from the Attitude Era or John Cena, which is jarring and took me out of the on-going story that was being told. It's a small criticism, but a criticism non-the-less.

As for the matches that included on this set, the majority make sense in terms of a historical stand point, but that doesn't mean that a lot of them are very good. We kick off the match with Bruno Sammartino defending the WWWF Heavyweight Championship against Billy Graham, which is a piece of history, but doesn't stand up to today's standard. Hulk Hogan and Andre The Giant's legendary Wrestlemania III match is given a new look, as it's shown entirely from the hard camera side and with no commentary, it's very strange to see this classic from a new stand point. The original Royal Rumble match is up next, in a fairly basic affair, better Rumble's were to come, but this match laid the foundations. Yokozuna against Koko B. Ware is a squash match, but it's the first match from Raw. Steve Austin taking on Jake Roberts in the 1996 King of the Ring Final is a basic contest, that could have done with more context being added, but the diamond of a promo which followed and lead to one of the hottest times in wrestling history is worth it.

The third disc kicks off with the infamous Shawn Michaels vs. Bret Hart WWF World Heavyweight Championship match from Survivor Series 1997, with the majority of this one being decent fare, although not on the level of the pair's previous matches, the interesting stuff happens once the match is over. The segment between Stone Cold and Mike Tyson is as electric as it was when first shown. Triple H and The Rock have decent TV bout as the main event of the first true episode of Smackdown, although the two have had much better elsewhere. The announcement of the WWF's purchase of WCW, complete with swerve is another good slice of TV. The Rock and Hollywood Hogan's match from Wrestlemania X8 is an absolute classic and proof that good storytelling should always be the basis of a wrestling match. The Battle of the Billionaires from Wrestlemania 23, with Bobby Lashley representing Donald Trump and Umaga representing Mr. McMahon is more entertaining than it deserves to be, but I'm sure they could have found a more important match to include on this set. The main event from the first Tribute to the Troops with Batista, John Cena and Rey Mysterio taking on Big Show, Chris Jericho and Randy Orton is decent enough and showcases some major talents in WWE's recent history. CM Punk's entire Pipebomb promo is included in it's immaculate glory, whilst Punk's battle with John Cena on Raw prior to last year's Wrestlemania is probably the best match on the set, with a terrific series moments that had the crowd on the edge of their seats, a good way to close the set.

Overall, this is a really enjoyable set to watch, the documentary is strong with a large area covered in a short amount of time. The matches are both significant and for the most part entertaining and the variation means that they are much easier to watch in succession than say the recent Money in the Bank set. If your looking to start your WWE DVD collection this would be a nice place to start.