WWE Night of Champions 2013 is out on DVD and Blu-Ray now, available from www.wwedvd.co.uk, priced £12.99 on DVD and £13.99 on Blu-Ray. Broadcast live on Pay-per-View from the Joe Lewis Arena in Detroit, Michigan, USA on 15th September 2013, the show is main evented by Randy Orton defending his WWE Championship against Daniel Bryan, alongside a Two-on-One Handicap match pitting CM Punk against former mentor Paul Heyman and Curtis Axel, Axel defending his Intercontinental Championship against Kofi Kingston, as well as five other matches.  The commentary is provided by John Bradshaw Layfield, Michael Cole and Jerry Lawler. 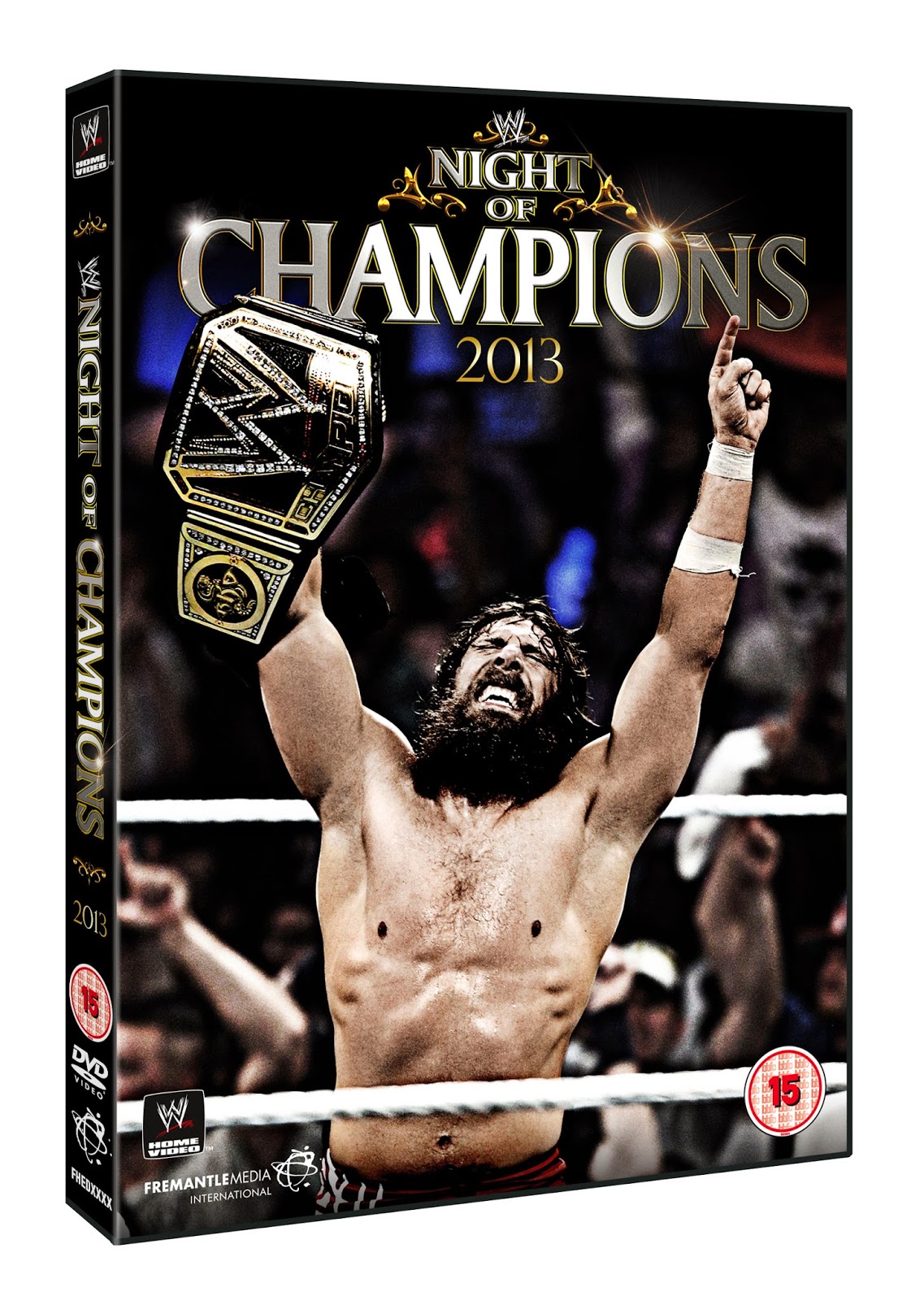 Fandango vs. The Miz

Another WWE PPV, and another cover that spoils the result of the main event! Now, I try to keep these reviews spoiler free, recommending action if it is good, but allowing the reader the opportunity to be surprised if perhaps they haven't been paying attention to WWE in recent times. So, what I will say about the Night of Champions main event, is that it is an enjoyable piece of WWE main event action. Orton looks great when in control and Bryan looks great fighting from under neath, these two really complement each other in the ring and have proven that time and time again. The finish is anti-climatic and the bizarre angle that followed the next night on Raw really tarnishes some decent action beforehand. This is probably the best of their series of PPV matches, although personally I think they've out done this on more recent episodes of Raw.

CM Punk's quest to get at Paul Heyman continues in a storyline heavy handicap match also involving Curtis Axel. There is some entertaining stuff going on here, with Punk's constant attempts to get at Heyman, who plays the perfect villain throughout, and there is some decent wrestling sequences between Punk and Axel, it feels like something is missing in this match, that even the debut of a new Heyman guy can't replace. Axel is in action in the opening contest as well, being forced to defend his Intercontinental Championship against Kofi Kingston. This one again has some decent action and crisp moves from both men, but relies to heavily on rest holds and lacks a cohesive story and flow.

Elsewhere, Alberto Del Rio defends his World Heavyweight Championship against Rob Van Dam in a sloppy contest, with a screwy finish only capitulating this. Dean Ambrose defends his United States Championship against Dolph Ziggler in a match that shows promise but is given neither enough time to really deliver or enough build up for anyone to care. The Miz and Fandango wrestle a match that is no more appealing now than it was at the time. The Shield's Roman Reigns & Seth Rollins defends the Tag Team titles against The Prime Time Players in a basic and short tag team affair. AJ Lee puts her Diva's Championship on the line against Natalya, Brie Bella and Naomi in a Fatal Four Way match, that has very little to offer, apart from a double Sharpshooter from Natalya, and even that has been seen before.

In terms of DVD extras, there's one solitary inclusion here as The Prime Time Players, The Usos, 3MB, Tons of Funk and The Real American's do battle in a Tag Team Turmoil match, with the winner facing The Shield later on in the show. It's an entertaining battle that showcases the strength of WWE's tag team division very well with some clever spots and paint by numbers booking. Again, it's a shame there's only one extra included here, but apparently that's your lot when it comes to WWE DVD's these days.

In conclussion, this is a fairly poor PPV, which is clearly filling time and treading water for a lot of storylines to keep moving forward. Orton and Bryan will go on to have bigger matches, Punk's still got time to chase Paul Heyman, Del Rio and RVD put on a much better contest at Battleground, I could go on. Honestly, if you're a completist, by all means head out and pick this one up, but if you're after three hours of entertaining wrestling, head some where else on this one.
Posted by James at 02:46