WWE TLC: Tables, Ladders and Chairs is out on DVD and Blu-Ray on 31st March 2014, available from www.wwedvd.co.uk, priced £12.99 on DVD and £13.99 on Blu-Ray. Broadcast live on Pay-per-View from the Toyota Center in Houston, Texas, USA on 15th December 2013, the show is main evented by WWE Champion Randy Orton and World Heavyweight Champion John Cena competing in a Tables Ladders and Chairs match to unify their respective championships, alongside Cody Rhodes & Goldust defending their Tag Team Championships against The Real Americans, Curtis Axel & Ryback and Big Show & Rey Mysterio in a Four Way Elimination match and CM Punk facing up to The Shield in a three-on-one Handicap match, as well as five other matches.  The commentary is provided by John Bradshaw Layfield, Michael Cole and Jerry Lawler. 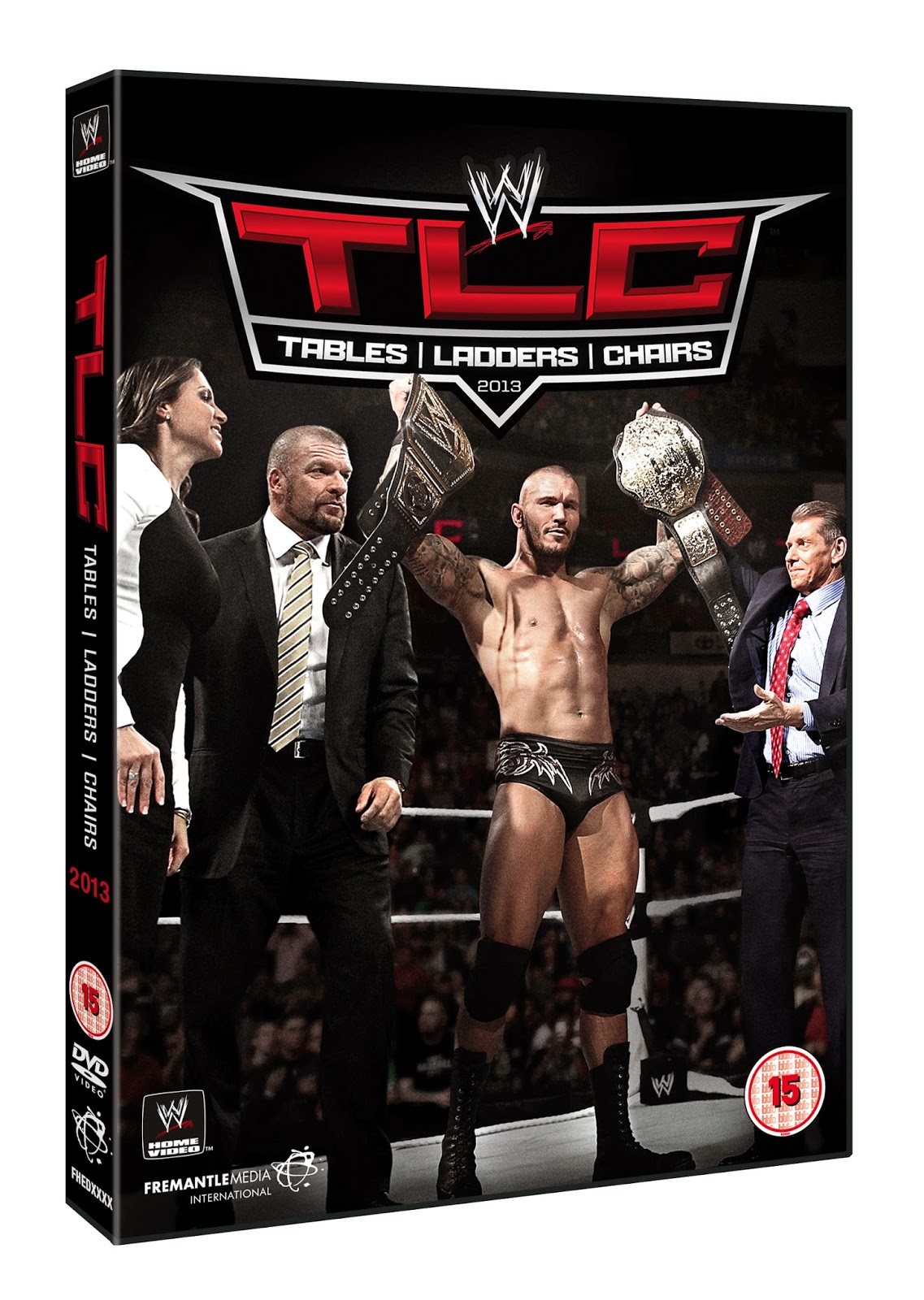 The Authority Promises a Historic Night

3-On-1 Handicap Match
CM Punk vs. The Shield

No Disqualification Match
Kofi Kingston vs. The Miz

3-On-1 Handicap Match
Daniel Bryan vs. The Wyatt Family

The Shield Reflect on TLC

WWE Superstars React to the Champions of Champions TLC Match


After a dire run of PPV's for WWE in the second half of 2013, they did turn the tide somewhat, closing out the year on a relative high with TLC: Tables, Ladders and Chairs. The main event sees John Cena and Randy Orton battle it out the PPV's namesake to unify the WWE and World Heavyweight Championships, in what is a fairly entertaining encounter. Whilst it does have it's drawbacks in the placing of the championships being far too low and a lack of any real shocking moments, the clever touches like the use of hand-cuffs, harking back to the duos "I Quit" match in 2009 and the fact that this is the cleanest ending to a PPV main event in a long time, mean it's a fairly easy to watch bout, nothing particularly special, but not a waste of twenty five minutes either.


The tag team elimination encounter between Goldust & Cody Rhodes, The Real Americans, Rybaxel and Rey Mysterio & Big Show for tag gold is the show stealer on this one, with a solid twenty minutes of well paced and exciting action. A series of moves between Cody Rhodes and Rey Mysterio is a superb and some of Mysterio's best work in WWE over the last three years.

In the opening contest, CM Punk takes on the entirety of The Shield, the first of two three-on-one handicap matches on the show. It's a storyline heavy bout, as WWE continues to tease a Shield breakdown, whilst Punk and Rollins produce the best wrestling of the match. Could this be CM Punk's last WWE PPV (non-Rumble) bout?

Elsewhere Daniel Bryan's feud with The Wyatt Family build with a three-on-one handicap match, that is the perfect length to showcase all four competitors, and definitely Bray Wyatt's standout moment in WWE up to this point. Kofi Kingston battles The Miz in a No Disqualification bout, as their will-they-won't-they feud concludes in a decent bout, but one that barely acknowledges the No DQ stipulations.


AJ Lee defends her Diva's Championship against Natalya in a psychical women's outing, but one that's not a patch on what they did on Main Event not too long ago. Damien Sandow got a shot at Big E Langston's Intercontinental title in a mostly uninteresting six minutes of action and Brodus Clay took on R-Truth in well put together bout that plays to each man's strengths, but unfortunately with no real follow up to the conclusion it ends up pretty miss able.

The DVD extras see Dolph Ziggler tangle with Fandango on the TLC Kick-Off, which is another throw-away piece of action. There's also a flurry of short interviews, reflecting on TLC, including ones with The Shield, John Cena and Randy Orton, which all adds something to preceding in their own way, but won't swing anyone's decision on whether to buy the disc.

Overall, this is acceptable PPV, with the headline bouts each delivering on some level, especially the 4-Way Tag match. It is however let down by a slightly dull undercard that has seen no real progression for any of the performers in the three months that have followed. You will most likely be entertained by it, but might find yourself skipping through some of the filler.