SWE Hell for Lycra XI: Oh, What A Rush Preview by Billy Strachan

SWE hold their eleventh Hell for Lycra event on August 30th and for the second year in a row it is being held at the Bonar Hall. This will be my third Hell for Lycra and once again SWE have pulled out all the stops to make sure this is the premier event on their calender. 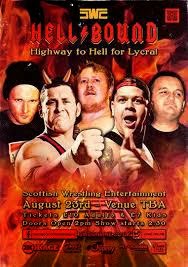 The week before, August 23rd, they host Hellbound at Kirkton Community Centre which will include Grado vs Colt Cabana and the contract signing between Chaz Phoenix and Steven Magners. It is also the final stop to Hell for Lycra and with so many wrestlers still to make it to the event like the Future Division Champion, Christopher Saynt, or the Sirens, this will be their last chance to get onto an already huge event.


The first name announced for Hell for Lycra XI was Terry Funk, however, due to him securing a TV pilot he had to pull out. Dennis Stamp was announced not long afterwards before the big one, Road Warrior Animal is coming to Dundee.


So without further ado, let’s look at the event.

The Beast vs The Animal

The Beast of Belfast faces Road Warrior Animal in a battle of the behemoths. Both men are big, hairy, hard-hitting dudes. This isn't for titles; this is just to prove who the King of the Jungle is, the Beast or the Animal.

Doug Williams returns after last years loss to Claymore, 12 months ago he was Ted Dibiase's hired gun but this year he is on his own against mmmmm Joe Hendry…Global Hero. Joe Hendry is collecting titles everywhere at the moment and one big win against a former TNA X-Division, Tag Team and Television Champion will propel him back into the SWE Heavyweight Title picture. It won't be easy as Doug Williams is a well travelled veteran who has faced, and beaten, the best.

The Trident Try to Take Down the Foundations

The Trident and Scott Renwick have been running riot over SWE, taking out anyone and everyone that has got in their way. Kevin Williams was due to be on the SWE Originals team but parted company with SWE at the end of July. Will a forth member be announced at Hellbound or will we have to wait for Hell for Lycra to find out the last member? The Trident team have youth and power on their side but you can never count out the wiliness that comes from experience.

The Evil Scotsman Will Fight The Goblin of The Skies

This has been a personal feud stemming from Euan G Mackie no showing a main event back in January at Season’s Beatings. Bravehart has made it his personal mission to rid, not only SWE but, all wrestling of The Very Good one. Bravehart himself has said he isn't 100% after taking a break from the ring after numerous injuries, including a concussion, but will relish the chance to beat Mackie once and for all. This won't be a wrestling match, this will be a fight.

Johnny Saint & Felix Fortune vs No.1 Marty Jones & The Jackal

Two World of Sport Legends will be in the ring on August 30th. This will be a tough one to call as Felix Fortune has just started his career with SWE and The Jackal is as hungry as ever to make a name for himself. It’ll also be interesting to see Saint and Jones work with younger opponents. 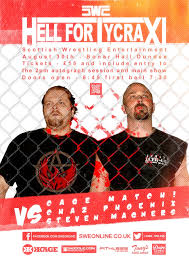 Now, if you want to talk personal. Steven Magners left SWE while SWE Tag Team Champion and member of The Syndicate with his tag team partner being, Chaz Phoenix. Magners didn't like the way that Chaz was siding with Authority, and namely, Bravehart. When Mr News needed a partner to defeat The Syndicate and win his job back, there was one man that had his own personal vendetta against them and Chaz Phoenix. After Magners and News won, and with the implosion of The Syndicate, Chaz became more vicious than ever and took out all his frustration on Magners. Magners was only too happy to get a little crazy. From kendo sticks, steel chairs, hammers, plastic bags, tables, steel guard rails and even going through the entrance way at Uprising. These guys have been trying to kill each other. At Hell for Lycra XI, it's career vs career. Those were the cliff notes. Here is a video to illustrate the upcoming match.

Ian Ambrose enters his 7th month as SWE Champion and he'll be facing his long time rival Martyn Stallyon. At last years Hell for Lycra Ian Ambrose lost to Rob Cage in the SWE European Championship finals, the year before he won the Tag Team Championships with Sam Ross, only to have that moment taken away from him due to a reversal by previous owner Ted Dibiase. Ambrose will be looking to pick up a win and hold onto his championship while Stallyon looks to put on another 5 star match and take home the big one. The former Future Division Champion will expect nothing less that to walk out with the gold. I think this will be match of the night judging by their previous matches with each other and both of them always kicking into another gear at Hell for Lycra.


There are only a few physical tickets remaining over at www.sweonline.co.uk/shop


Also on the 29th August at the Queen’s Hotel in Dundee, there will be a special Q&A with some of the Legends that will be at the event. It’s £10 to enter but tickets are limited, The Queen’s Hotel is literally across the road from the Bonar Hall. You’ll have a chance to meet Road Warrior Animal, Dennis Stamp, Marty Jones and Johnny Saint.


I, for one, have been looking forward to this all year. It's a night where anything can happen and the venue will be packed. If you haven't got a ticket, best hurry, as they won’t be around for much longer. It always promises to have moments that you won’t forget like last years Nursery Krymes Match or the cage match one year prior. If you want to get into the Hell for Lycra mood, last years event is here