WWE's OMG! Volume 2 - The Top 50 Incidents in WCW History is out now on DVD (There's a Blu Ray version too), available from www.wwedvd.co.uk. The three disc set, features a countdown of the (WWE Home Video's version of) the Top 50 Incidents in WCW History (surprising, huh?). Detailing the some of the most memorable moments in the history of WCW, some of which many wish they couldn't remember. There's also fourteen complete matches, featuring The Road Warriors, Cactus Jack, Sting, Big Van Vader and Randy Savage. 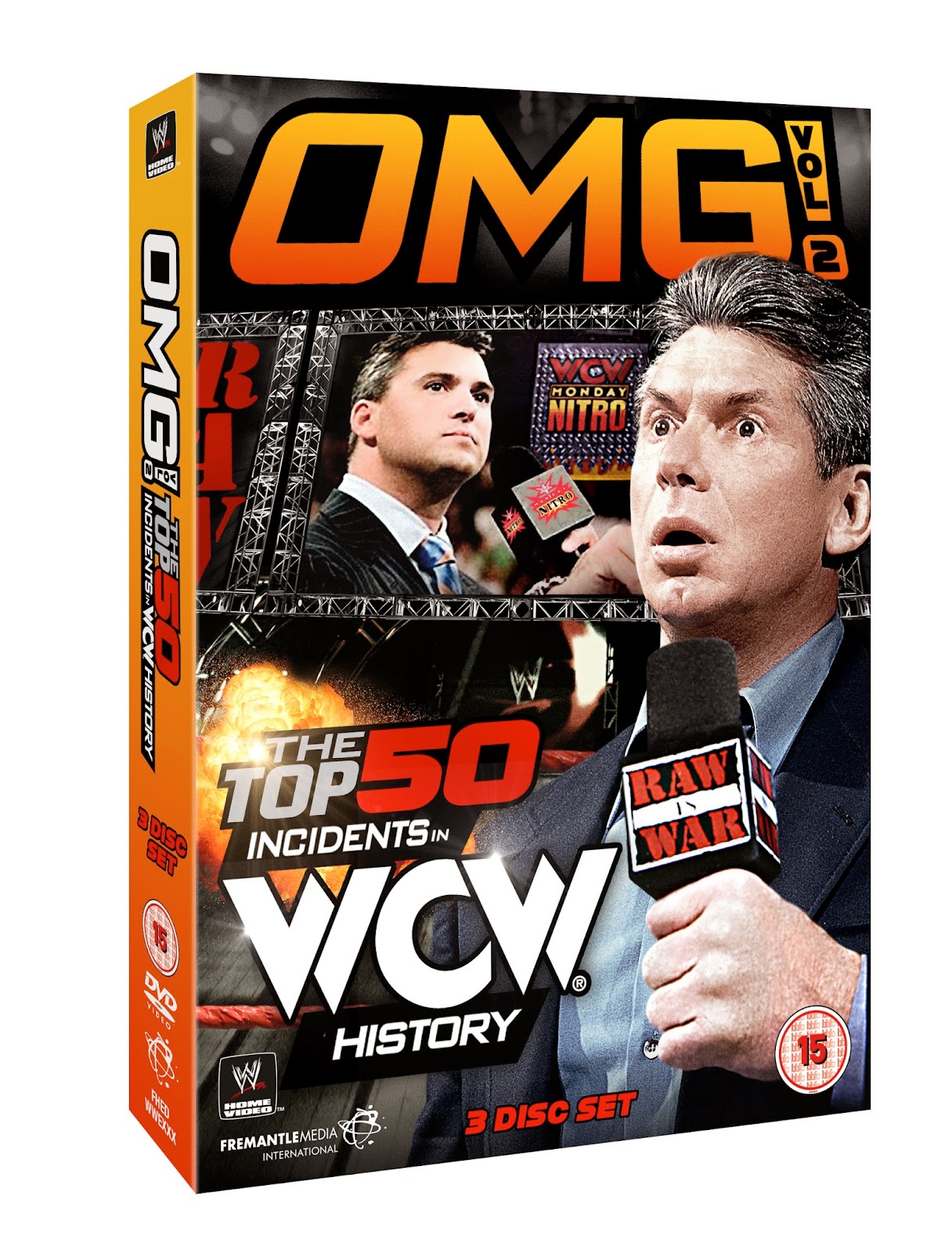 The cover of this DVD tells you pretty much all you need to know about the tone of this three disc set. If you're expecting a lot of vintage WCW moments, just like the original WWE version of the DVD presented, then you'll end up very disapointed. Instead the countdown focuses, almost exclusively, on those moments when WCW had wrestling fans everywhere shaking their heads.

It's strange that WWE still feels the need to take shots at a company that not only no longer exists, but they own. Especially with WWE using WCW PPV's as a big selling point for the WWE Network, it seems a bizarre decision to ridicule the company in such a manner. Yes, there are some terrific moments included in the countdown, like Magnum TA and Tully Blanchards "I Quit" Steel Cage bout and the formation of the NWO, but not enough to really justify everything else. Yes, a lot of WCW's later output was abhorent, but I'm sure there was enough good stuff to make this countdown worthwhile (especially considering the WWE version was almost all positive)

To add to the clips shown for each moment, there is a selection of interview clips to give depth and context. Again, if your expecting new insight on these moments, you'll most likely be disapointed, as the interviews are a hodge podge collection of interviews from other sets. If you're a regular to WWE Home Video releases you'll recognise a lot of what is included here. There's also a couple of times where an interviewee pops up for a matter of seconds, before disapearing to be never seen again. A prime example of this would John Cena, who turns up to give an incredible insight, by saying putting the World title on David Arquette was a bad idea, without any explanation as to why.

There some entertaining moments and moments where terrible moments are made entertaining by the surrounding interviews and production. This is a fun DVD to watch with a couple of mates and a few beverages, and have a bit of a giggle at some of the ill-advised antics of World Championship Wrestling, but that doesn't make it a very good documentary. It's lacking any real love and attention that made the previous 3 disc release Ladies and Gentleman...My Name is Paul Heyman such a pleasure to watch.

Similar to the main feature, the matchs and moments included on the next two discs are a selection of WCW's most face-palmable moments, lightly seasoned with some good wrestling at times.

The set kicks of with the Midnight Express tackling the Road Warriors in a Scaffold match at Starrcade 1986, adding context to Jim Cornette's horrific fall that was included in the countdown. I've never been a fan of Scaffold matches and this slow, plodding and mainly awkward affair didn't do anything to change that.

Despite Jim Ross's best efforts on commentary, Robocop saiving Sting from the Four Horseman at Capital Combat 1990 is a kayfabe-shattering pile of shite. The excitement continues as the Chamber of Horrors from Halloween Havoc 1991 is presented. Whilst the majority of the cometitors try their hardest to create a believable and fairly brutal battle, the match was never going to be able to get past what is a terrible, terrible concept for a match. Two of the competitors from the match, go on to have the first enjoyable tussle of the set. Cactus Jack and Big Van Vader have a back and forth brawl, on a April 1993 edition of Saturday Night, that suits both men down to the ground. It's a shame that the finish of the bout leads to the mind-boggling Jack amnesia angle.

Things return to normal as Dustin Rhodes and The Blacktop Bully go at it in the King of the Road match at Uncensored 1995 Seriously, why did anyone think this was a good idea? Even the commentary is dire. WCW's obsession with vehicle based wrestling continued at Halloween Havoc 1995, with Hulk Hogan and The Giant going head to head in a Monster Truck Sumo match! It's as bad as it sounds, a complete waste of money and does nothing for nobody. The closing stages of the moment are even worse, as WCW continues it's effort to destroy kayfabe. The two go on to have a wrestling match on the same show, which only really shows up just how green The Giant was at this point, before an overbooked to shit finish.

A run of moments focus on the formation of the NWO, as Scott Hall debuts on a May 1996 episode of Nitro, with a cool promo, heaped with intrigue for what was to come. Hall is joined by Kevin Nash at Great American Bash 1996, with Hall absolutely nailing it once again on the mic. Eric Bischoff is a good stooge, but in hindsight this makes little sense. It's then time for the big one, as Hall & Nash battle Randy Savage, Sting and Lex Luger at Bash at the Beach 1996. It's easy to forget just how good this match is, when the closing moments is so iconic. Three good moments in a row? WCW was on a roll in 96.

That roll continues into early 1997 as Sting hands his decision to the NWO at Uncensored. Even without the months of build, it's easy to see that this an important moment, that sets up Sting vs Hogan superbly. The run continues to a July episode of Nitro, when "La Parka" takes on Randy Savage. The match itself isn't anything special, but it's what happens in the closing stages and after the match that makes this such a great moment. However, signs of the oncoming shit-storm appear with the NWO's parody of Arn Anderson's retirement speech. It's not particularly and certainly isn't tasteful. To make things even worse, it sounds like there's absolutely no heat and not even a chance for Anderson to get retribution.

Goldberg vs. Hulk Hogan from a July 1998 episode of Nitro is next and whilst it's easy to argue that this match should have been on PPV, it's still a very cool moment with an uber hot crowd. The match is booked down to a tee and Hogan allows Goldberg to look like a star. Another WCW movie crossover see's Rick Steiner lock horns with Chucky. Jesus Christ. It's made out that the doll is an actor, but is for some reason still called Chucky. Just stupid. Before the madness truly sets in, Bret Hart and Goldberg keep the dream alive on a March 1999 episode of Nitro, with a well worked swerve segment that get's a great reaction from Hart's home crowd.

From this point on it's diaherea-esque stream of sloppy shits. WCW in the Year 2000 should be avoided with a barge poll. Firstly, Vince Russo and Eric Bischoff "reboot" WCW, in another segment full of kayfabe breaking references, that only the "dirt-sheet" readers would get. There's references to guys wrestling on the other channel at the time, who jumped ship from WCW, surely this is counter-productive exercise? Vampiro and Sting's Human Torch match from The Great American Bash 2000 (certainly not as Great as Dawley) is up next. For a big gimmick match with a long feud behind it, the crowd couldn't give a shit about the match and rightly so. It's a stupid match, with a ridiculous looking stunt. On the same show, Kevin Nash and Jeff Jarrett wrestle a piss poor, over-booked build up match to Goldberg's heel turn at the end. Nash' no-selling is at it's worst here.

Judy Bagwell on a Pole match. Vince Russo winning the World title. The San Franciso 49'ers Match. That's what this DVD closes with. By the end of the 49'ers match, I was ready to give up entirely on wrestling. All four are over-booked with some of the stupidest gimmicks ever to grace the circle that is squared. I don't want to see these matches ever again, please stop putting them on DVDs!


Whilst the documentary had, at least, some redeeming features, with the terrible moments being fleeting and supplemented with interviews, as the other two discs are at times painful to watch. Seeing some of the moments in full back after back could very lead someone to hard drugs. I'm sure the experience they had would be infinitely better than watching the last hour and a half of the third disc. WWE's representation of WCW...Just Say No.