I had high hopes for this show in the preview yesterday and with matches like Sami Zayn vs. Kevin Owens and Finn Balor vs. Adrian Neville, this one couldn't really fail...could it? 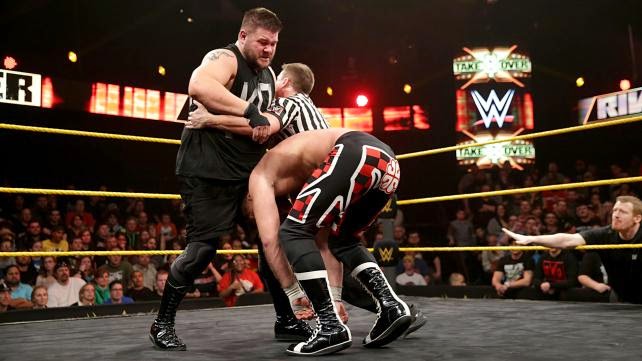 Almost eight months to the day that I saw Kevin Steen battle Tommy End in an absolute war of a match at Fight Club: Pro in Wolverhampton, Steen now under the guise of Kevin Owens was main eventing an NXT special live on the WWE Network against long time friend and rival, Sami Zayn. It was hard not to get tied up in the emotion of this feud from it's beginning at NXT Takeover: R-Evolution two months ago, even if you weren't aware of their entire history and this continued into the show, from clips of NXT General Manager William Regal visiting both men backstage to a terrific highlight package just before the match, as soon as bell time came and the Full Sail Arena went back and forth with the "Ole" and "Fight Owens Fight" chants, that big fight feel was there and it was game on for Owens and Zayn.

And that game was Kevin Owens absolutely battering Sami Zayn for twenty minutes. This was a story that suited both men down to the ground, Owens was allowed to show off an impressive series of power moves, whilst Zayn's "fighting from underneath" selling and offence may be the best in the business right now. Zayn's desperate flurry of offence contrasted nicely with the slower more precise Owens, who constantly went back to a headlock in an attempt to get those fans cheering him to turn on him. The story was compelling and the parts were well cast, similar to Zayn vs. Neville from the previous special, this was two former Indy stalwarts meshing their styles with WWE's sports entertainment jugganaut.

Of course, no story would be complete without drama and suspense and through a series of near falls for both men this match had it in spades. Zayn managing to pull out a series of impressive moves on the bigger man, including a Blue Thunderbomb and a Half and Half suplex, which even if I wasn't entirely convinced it was over, still made me sit up and take notice. The move that everyone thought could get the win for Zayn was the Helluva Kick, but after two missed attempts, cleverly, Zayn was never able to hit the move in the match. This gives him even more reason to have a gripe with the way the match ended. Keeping a move like the Helluva Kick feeling special in a WWE where almost every finishing move has been kicked out of is vital going forward.

That finish though. That finish. If anyone says they predicted this ending in such a fashion, then they are a lying bastard. Owens battered Zayn with strikes, a Pop-Up Powerbomb and four regular powerbombs, whilst Doctor's attempted to see to Zayn, leading to the referee calling a stop to the match and awarding Owens his first NXT Championship in just his third televised match for WWE. It was a shocking moment, a rare thing in wrestling these days, whilst also preserving the two for a rematch later down the line. As good as this match was, you know the rematch will be that much better for how this one was booked. And let's not forget Owens has to defend the title against new number one contender Finn Balor as well. Triple Threat? 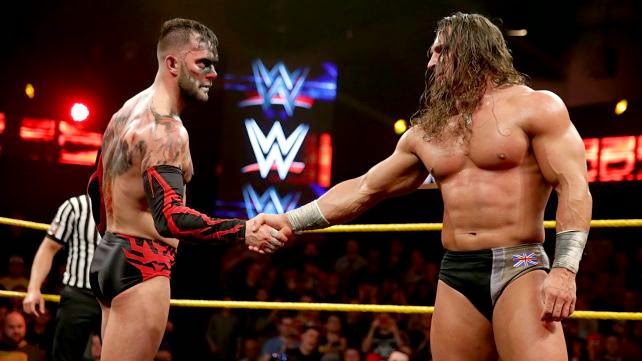 As mentioned in yesterday's preview, the number one contender's tournament has done wonders for both of these competitors, especially Finn Balor, allowing him to look like a credible threat in NXT, whilst allowing Neville to recoup from two high profile losses to Sami Zayn. This was hammered home by a well produced promo video, shown on the Kick-Off show and just before the match itself, detailing the tournament in full as well as having words from Neville and Balor outlining what kind of match we could be in store for.

This match was everything it promised to be and more, becoming a storytelling epic, as Neville showed some of heel-ish tendencies that made his feud with Sami Zayn such a pleasure to watch, denying the crowd of Balor's Tope Conhilo twice, meaning that when Balor finally hit the move it got a much bigger pop than it would have first time round. Slapping on multiple headlocks and controlling the pace of the early goings allowed the changes in pace to really stand out and rally the crowd even further behind Balor, meaning the crowd was fully behind the Irish man, which allowed for his win to feel even more special when he pulled it out of the bag following a dropkick into the bottom turnbuckle and a Coup de Grâce to pick up the win.

Played out on top of the foundation laid by the storytelling was a hard-hitting and technical series of moves and near falls, that knitted the pair's styles together and held the attention for the duration of the bout. Neville's series of German suplexes were beautiful and looked completely different to how most of WWE performs the move, whilst the closing three minutes of the match from the build up to Neville hitting Red Arrow onwards were an absolute joy to behold. The only complaint anyone can really have with this bout was the length, it really could have done with an extra five or so minutes to tell the story a little better. There were very few times in the match when I genuinely believed the match was over, with only the finish and Balor's small package after catching Neville with his knee's on a Red Arrow attempt truly making me think the bell was about to ring.

It seems like Neville's time in NXT is coming to a close following his loss here and it may only be a matter of time before he's beckoned up to the main roster, where dream matches with the likes of Cesaro, Daniel Bryan and Dean Ambrose await. This match allowed Neville to give back to NXT in a big way, as he worked hard to make Balor look like a star, in perhaps one of the most selfless performances in recent memory. Howay the lad. 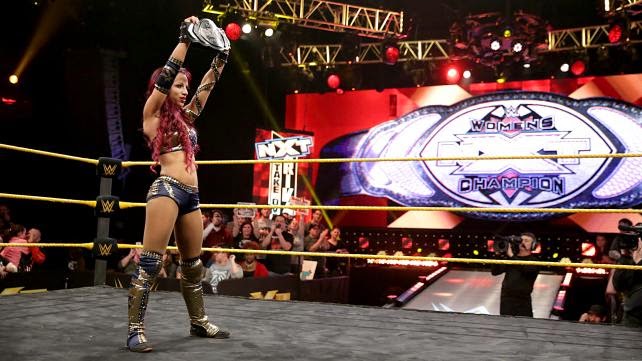 Up there with the best Fatal Fourways WWE has ever put on, in rarified air alongside Edge vs. John Cena vs. Randy Orton vs Shawn Michaels from Backlash 2007 and Adrian Neville vs. Sami Zayn vs. Tyler Breeze vs. Tyson Kidd from NXT Takeover, this was a great showcase of the women's division in NXT. Playing on the interweaving relationships between the four, the match took several twists and turns developing on these relationships throughout the bout, with Becky and Sasha initially teaming up to keep Charlotte down, before Becky turned on Sasha with a lovely pumphandle suplex, Bayley continuing to show a more aggressive side to her game, as well as sequences of action between Charlotte and Bayley and the closing sequence with Sasha Banks.

The match flowed incredibly smoothly, building towards it's climax, a showdown between Sasha and Charlotte, naturally with each step feeling like it was leading to that final moment. After sending Bayley to the outside and failing to get the cover, Sasha locked in a vicious Crossface with Charlotte steadily edging towards the ropes. However, just when it looked like Charlotte had made it, it was Sasha who was one step ahead, switching into a Crucifix pin and picking up the victory and her first NXT Women's Champion, ending Charlotte's reign at 258 days. I was completely and utterly tied up in the emotion of this one, wrapped up in the story of the match and that was only exaggerated by the hug between Sasha and Charlotte after the match. There isn't a "Diva" on the roster, that knows her character and plays it to a tee as much as Sasha Banks. A deserved win and a terrific match. 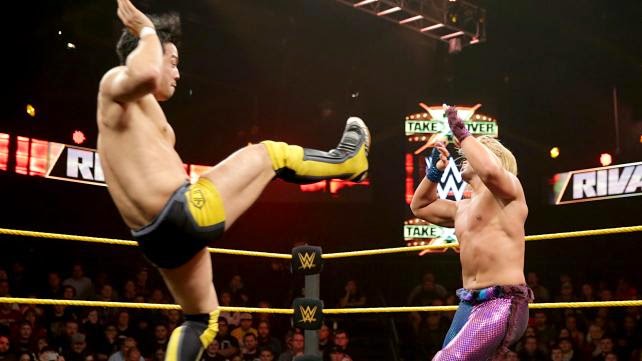 An exciting, technical and psychological opener, that gave just enough of a taste of what these two can do together in the ring to whet the appetite for the matches still to come. Breeze continued to show why he's NXT's secret weapon putting a shift in, looking comfortable when in control of the match, working over Itami's knee and leg with a series of strikes and submission holds, including a Figure Four Leglock around the ringpost, a move which always get's a pop out of me. Itami's selling was solid, grabbing the leg after the Single Leg Running Dropkick that got him the pinfall victory was a great touch, however I would have liked to have seen the leg play a bit more of a role following Itami's "Hulking Up" in the closing stages of the match. These two could do better in a main event situation, but as an opening match it did everything it needed to do. 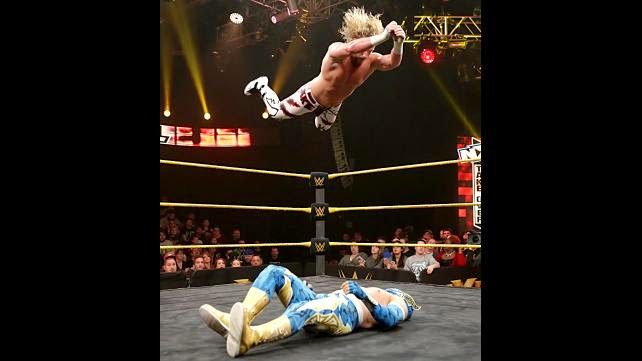 If you asked someone unfamiliar with WWE and NXT which one of the guys on this show was on the main roster, I very much doubt whether they'd pick Sin Cara out of the bunch. He's become even more sloppy as of late, genuinely looking like he would rather be anywhere else and this match was no different with Cara botching a number of big spots and highflying moves, that made him and his opponent look like morons. Even Kalisto picked up the Botchcaraitis, stumbling on an attempt at a dive to the outside. Luckily, Murphy & Blake impressed on their biggest match to date, with a series of good looking double team moves, including the running brainbuster into frogsplash combination that got them the pinfall victory. I'm looking forward to seeing more of them going forward and much much less of Sin Cara. 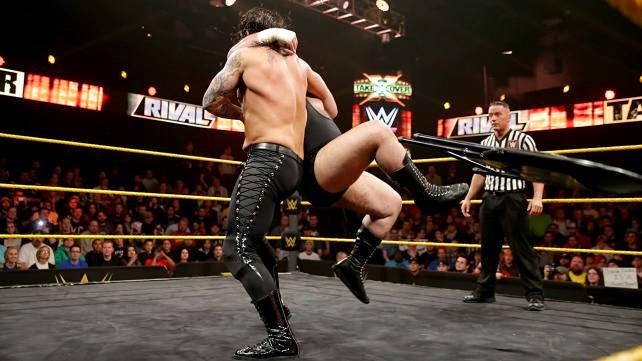 The less said about this one the better, I think. It was sloppy as a soup sandwich, Corbin failing to clothesline Dempsey outside the ring, but Dempsey going over the top anyway to a chorus of loud boos, is simply unacceptable for guys who've been in the developmental system for three years. Whilst there were decent spots in the match, such as Dempsey hitting a suplex on the ramp, the distinct lack of in-ring chemistry between the two, an awkward looking End of Days finish and the aforementioned sloppiness made this one a complete dud. 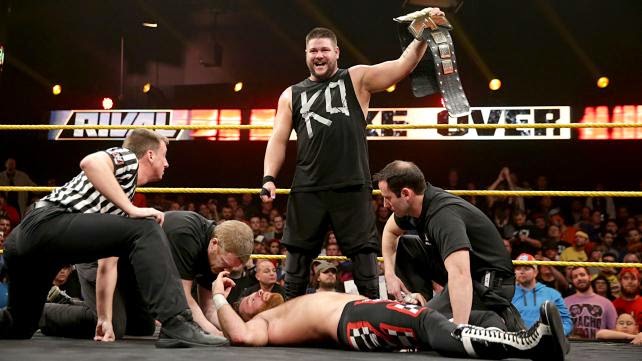 What a show! What a fucking show! The two top singles matches delivered two completely different and throughly entertaining contests, whilst the Women's Championship match provided four women the opportunity to shine at the same time. If only we could wipe Corbin vs. Dempsey (and parts of the tag title match) from the record.

Either way NXT did it again...and they will do it again...The Future is Now.
Posted by QTPW at 21:17