As the song says...Oh oh, it's WrestleMania, yeah this is your life. This sentiment has never rang truer than today, as we get closer to the Granddaddy of Them All. But will come out of this years Mania on top and who will end up with the proverbial egg on their face? All this and more will be answered (or wildly speculated about) in the article you are about to read, monsieur! 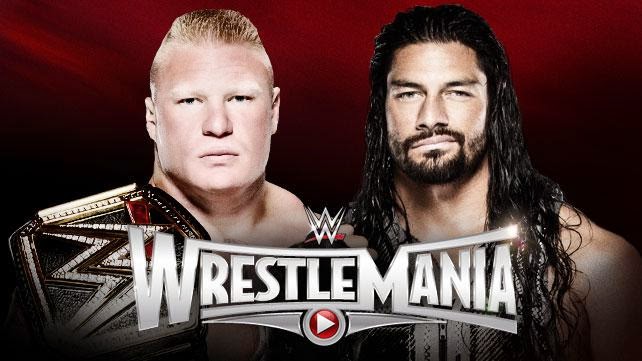 I can't think of a Mania main event in recent years that's had people talking quite like Lesnar vs. Reigns has. Ever since the Real Rimble a large proportion of "die-hard wrestling fans" have been questioning whether Reigns is ready to main event such a big show. Most have pretty much made their minds up and are encouraging those in attendances to loudly boo Reigns throughout the match. Personally, I'm not sure if Reigns is ready either, however I'd be quite happy to be proved wrong and give Reigns the opportunity to step up to the plate, he's proved in his two highest profile singles matches (opposite Randy Orton at SummerSlam and Daniel Bryan at Fastlane) that he has the ability to put on top quality singles matches. Obviously the argument is that Orton and Bryan's experience was enough to pull Reigns through those matches, but as always it takes a few to fanta.

However, it was the news that broke on Tuesday evening that really sent the wrestling world into full on wild conjecture mode. Yes, Brock Lesnar confirmed he had re-signed with WWE past WrestleMania, that must mean he's holding onto the title...right? I have to admit I was leaning towards that, until Michael Cole ripped into Reigns chancing of beating Lesnar on the WrestleMania Today show on Thursday. It's pretty easy to tell when Cole has been told to get a point across, because he'll hit you over the head with it, chop it up finely and make you snort lines of it, and therefore, it has to be presumed that Vince told him directly. Therefore it was this that made my mind up on who was winning on Sunday...

Prediction - Reigns wins with a Spear 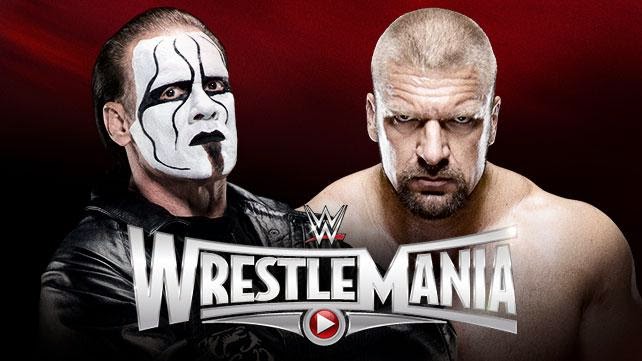 Perhaps the longest running feud heading into WrestleMania, having been running since November's Survivor Series, is this tussle between Sting and Triple H. It's been nice to see a bit of a slower feud and it was clear that WWE had a plan for how to use their newest acquisition from Survivor Series onwards. I'd have like to have seen the story develop a little further in the last four weeks or so, as we headed towards WrestleMania, to give a bit more depth to the WCW vs. WWE thing that was attempted by WWE, but still it's been just interesting enough to hold my attention on Raw.

This bout all hinges on how ready Sting is, it's been a long time since Sting's last quality singles match and even longer since he was competing in strong matches on a regular basis. On the other side of the coin, Trips was involved in some of the stronger matches of 2014, opposite the likes of Daniel Bryan and The Shield. I think, the best hope this one has is to go the over booking route, have a load of run ins from The Authority and possibly some big WCW names and build it around big spots. The story would seem to dictate that Sting will finally get the victory and rid the Universe of the Authority, in some form anyway, but you can never tell with that dastardy Triple Aitch.

Ladder Match for the Intercontinental Championship
Daniel Bryan vs. Stardust vs. Dolph Ziggler vs. Luke Harper vs. Dean Ambrose vs. R-Truth vs. Bad News Barrett (C) 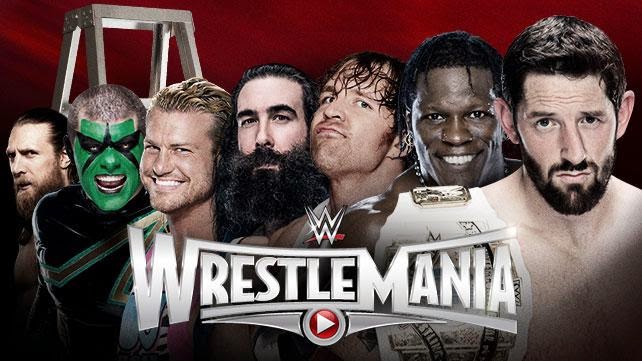 As for what I expect this match to be? It's going to be a lot of fun, there's a lot of creative guys in the match and a lot of wrestlers who will be looking to make their mark and this show, attempting to prove that they should have been given a singles match. Expect this to be similar to the Money in the Bank ladder match, but turned up to eleven. There's even some room for some antics from the likes of Stardust and R-Truth which will bring an extra dimension to the bout. The favourite would have to be Daniel Bryan, as it would allow the fans the chance to get some "Yes-ing" off their chest, and produce the feel good moment for a certain section of the fan-base. I've got an inkling we might see WWE through us a curveball however... 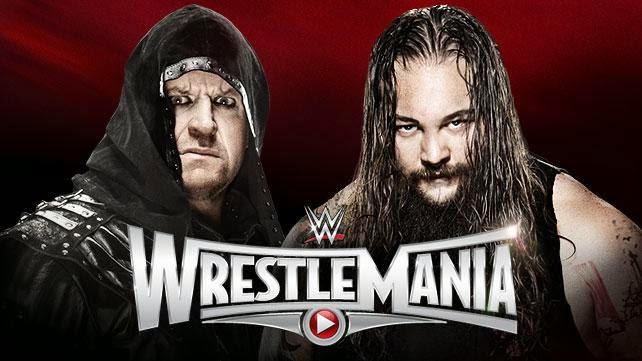 
This is another intriguing match-up, because there's plenty of factors that are completely unknown to us fans. Whether Taker is continuing after this match is probably the biggest of those unknowns and up until know it hasn't really mattered when it came to The Streak, because we all knew Undertaker would win. But with The Streak gone, it opens it up a bit more. Surely, if Undertaker is having one last match, and with The Streak gone, then Bray Wyatt would go over. However, if Taker is going to have a bout next year, against say Sting, then Taker going over would be the better option, with a competitive loss to Undertaker not exactly harming the younger Wyatt, if handled correctly. I'm hoping for plenty of theatrics here and the two to offer something completely different from the rest of the show. 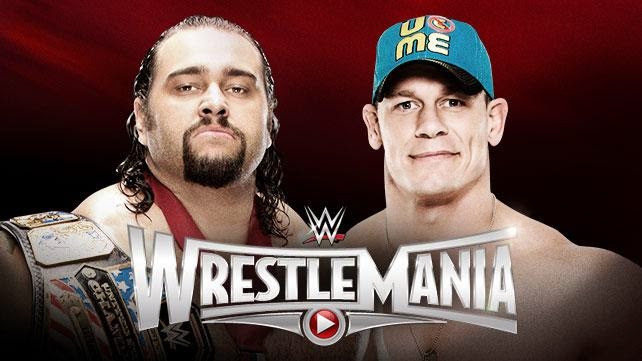 The most old-school match on the card, this bout is straight out of the eighties. It's the evil Russian who gives no shits, against the troop-lovin', apple pie eatin', Jhort wearing, pledge of allegiance swearing, John Cena. I thought the two put together a strong contest at Fastlane, and I'd expect a similar effort here to bring the story full-circle, with all the grandeur that WrestleMania can offer them. I'd be surprised if Cena doesn't win this one, it'd free Rusev of his streak without making him look weak, whilst allowing Cena to remain as the hero of a generation of fans. All good stuff. 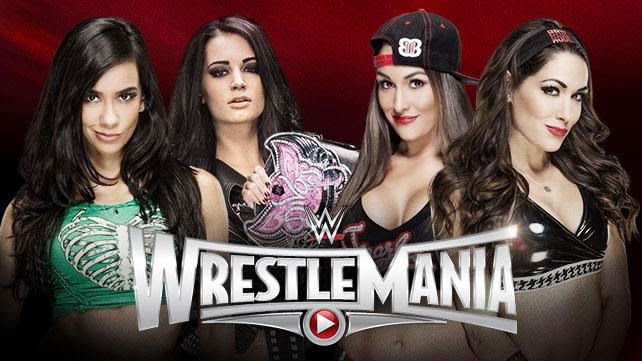 A diva's match with actual build, you say? A coherent storyline with a clear given reason why the competitors want to fight? What is the world coming to?

I'm actually reasonably intrigued by this one, and as always with Diva's matches this is all about the time it is given when the girls get out there. AJ and Paige are more than capable, with both Bella's having shown signs of improvement over the last year. I really want to be calling this match a "good" in my review, rather than "better than a regular Diva's match". I'm hoping WWE don't swerve a Lumberjack gimmick onto it, as it will completely ruin any chances of this bout being vaguely watchable. I expect we'll see some dissention between the babyfaces, and possibly even the heels during this, with The Bellas grabbing the win, before Nikki drops her title on Raw. 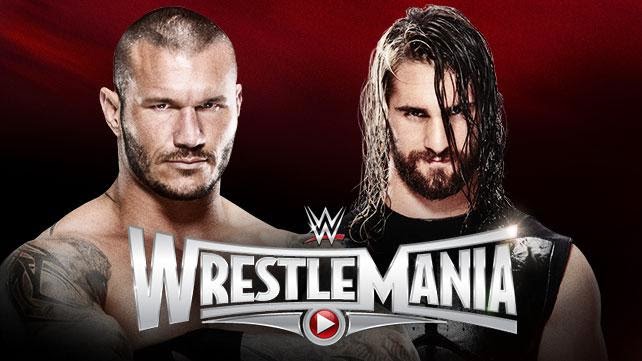 
Orton and Rollin is my pick to steal the show heading into the show. Rollins has been on fire for the past twelve months, whilst Orton's in-ring work has also been top notch. The two have bought in plenty of intensity and hopefully we'll see this come together in their match. This is the match that should push Rollins into that upper-echelon of the WWE roster, by allowing the biggest potential audience to see what a special talent he really is. Orton is more than capable of allowing Rollins to look his absolute best, and hopefully what this match is geared towards. With Rollins holding that briefcase, you never know whether we'll see him later on in the night.


So, it's the Show of Shows and all that jazz. Looking over this preview, I'm pretty excited and so you should be to. Remember, whatever happens, you love wrestling and wrestling is fun. Go along with it, enjoy it with your mates. Don't be a dick.
Posted by QTPW at 23:32