With just two weeks of hit and miss build up, heading out of a strong Payback  PPV, how could the sixth incarnation of WWE's Elimination Chamber shape up? Let's have a look ahead. 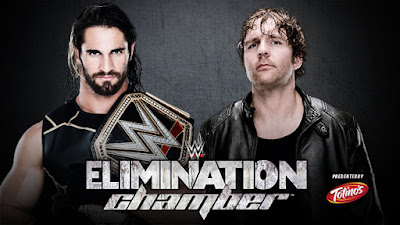 The return of last year's ATPW 2014 Feud of the Year has perhaps not reached the heights it did last time round. Trying to jam over a months worth of booking into two weeks has left the build up feeling rather hurried. Both Seth Rollins and Dean Ambrose have put in strong performances, but have been hampered by a supporting cast of what feels like thousands as the hatred that we saw between the couple over last summer doesn't seem to be as apparent as it once was. Part of me wishes that this bout had been held off until Money in the Bank on the 14th July, just to give things time to breath. It isn't like WWE went through most of 2014 without the World Heavyweight title being defended on PPV or anything!

Now, we all know that Ambrose and The Aerialist can go in the ring, and we all know that they have bucket loads of chemistry. But...as has been the case for the last couple of PPV's, this is all about the involvement of The Authority. J&J Security being dicks is all well and good, their antics can play nicely into the developing story of a match, but another run-in or more general arseholery from Kane or even a returning Big Show and Rollins' title reign begins to become a big of an over-booked joke. I'm pulling hard for an interference free win for The Architect to bolster his run as champion and build him ready for potential collision with Brock Lesnar down the road. 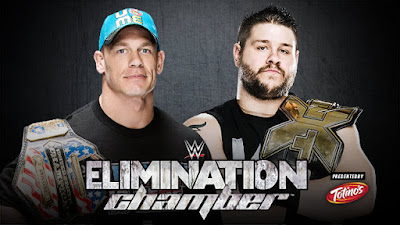 These two characters fit so well together. The "Never Give Up" John Cena opposite the no fucks given Kevin Owens. The feud between the duo has become incredibly heated over just two weeks, being both well paced and well performed, this may be the clash I'm most looking forward to on Sunday. If the double show as much chemistry in the ring, as they have showed on the microphone on Monday Night RAW #1147 then we might be in for a real treat. Expect a smash mouth brawling style of match, with plenty of sound WWE storytelling, these two may bring out the best in each other.

Does Kevin Owens need to win his WWE PPV debut? Of course not, it's against John Cena. A headline bout against the biggest star the industry has produced over the last ten years will be enough to round of this introduction to WWE's main stream. There's a number of direction we could see this one take, and I'm hoping WWE braves it out and has a clean finish, that leaves a reason to return to the feud later down the line.

Elimination Chamber match for the vacant Intercontinental Championship
R-Truth vs. Sheamus vs. King Barrett vs. Ryback vs. Dolph Ziggler vs. Rusev 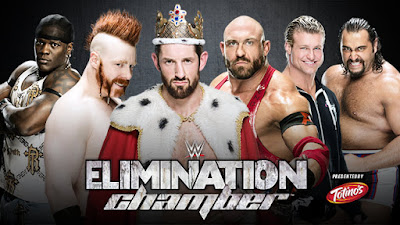 Fuck R-Truth off and you've got a decent Elimination Chamber match, that might be won by any of the competitors. Whilst Rusev's involvement is up in the air due to a leg injury suffered on Thursday Night Smackdown #823, if the Bulgarian Brute is involved in the match we'll have the continuation of his feud with Dolph Ziggler which could get messy for the Show Off. Elsewhere I'm hoping for some heavy hitting action from the likes of Sheamus, Barrett and Ryback and hopefully some creative spots with the Chamber. Chamber matches always tend to be a lot of fun and with a match that is fairly hard to predict. I want to say Sheamus, but look at that win loss record!


Tag Team Elimination Chamber match for the WWE Tag Team Championships
Los Matadores vs. The Ascension vs. The Lucha Dragons vs. Tyson Kidd & Cesaro vs. The New Day (C) vs. The Prime Time Players 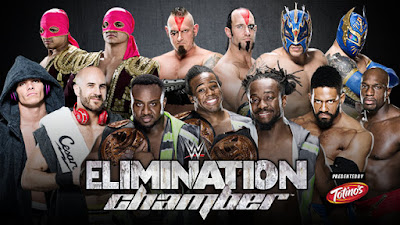 Just like R-Truth in the Intercontinental Championship bout, take out perenial there-to-make-up-the-numberers Los Matadores (replace them with Luke Harper and Erick Rowan) and you've got a great looking Elimination Chamber. The tag team element will bring a freshness to the gimmick and the possibility of having twelve bodies flying about the structure is an exciting one. I'm expecting quick and pacy action, with all six teams able to offer something different to the Chamber. I'd be surprised to see New Day drop their titles as they're riding a wave of momentum at the moment as champions, I'd imagine we'll see either Cesaro & Tyson Kidd or The Lucha Dragons as the final opponents for the dastardly trio. 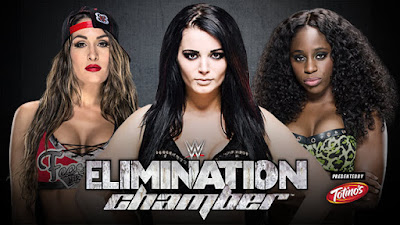 After a piss poor tag team match at Payback WWE has done a good job of constructing a feud between these three women which is both easy to follow and makes perfect sense. Naomi injured Paige after The Diva of Tomorrow became Number One contender, Nikki Bella is the Diva's Champion, let's have three way (as the old saying goes). WWE has given these women the opening segment of the second hour of Thursday Night Smackdown for two weeks in a row, with a good talking segment on #822 and a decent contest between Paige and Naomi on #823, so it would seem WWE is taking note of the work we've seen from the women in NXT and realising that the more time that women have to develop feuds and the more time they are given in the ring, the more people will give a shit. I'm quietly looking forward to seeing if these three can pay off the confidence that WWE has shown in them over the last two weeks, I also have a feeling we'll see Nikki drop the title here. 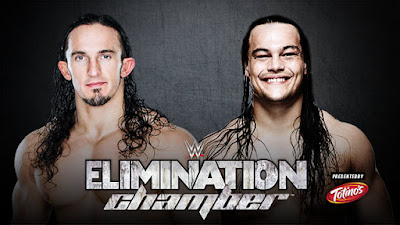 
A simple feud based around Bo Dallas costing Neville his feud ending bout with King Barrett on Monday Night RAW #1147 and the 25 year old's jealousy of The Man That Gravity Forgot's success since his move to the main roster. I wouldn't mind seeing this feud go for a little longer than two weeks, as Dallas has really stepped up to the plate with his mic work across this short feud and I'm intrigued to see what he might do if WWE put a little more faith in him. The New Sensation has proven he can perform on the bigger stage, whilst the son of Mike Rotunda hasn't produced a memorable match since his time working opposite (Adrian) Neville on NXT last February. If Dallas can step up here we could have a good slice of competition, especially if we see the artist formerly known as Pac's injured leg play into the bout.


This has all the makings of a very very good PPV. Owens vs. Cena could be something very special indeed, even with a rushed build up Ambrose and Rollins' chemistry should pull them through, booking permitting. The pair of Elimination Chamber bout are almost guaranteed to deliver on their gimmicks alone. Even the Diva's title bout may present some worthwhile action. I'm worried about how much I'm looking forward to this, it tends to be a recipe for disaster....remain positive...remain positive....

See you Monday for the review. Enjoy the show.