ROH Best in the World 2015 Preview

Five weeks removed from Global Wars, and now with a new television presence next to TNA's Impact Wrestling on Destination America in the US, Ring of Honor presents Best in the World. Jays Briscoe and Lethal are set for the main event of the evening in a title for title bout, but is this show really a one match affair? Let's go through the card and see what ROH could have on offer for us from Terminal 5 tonight. 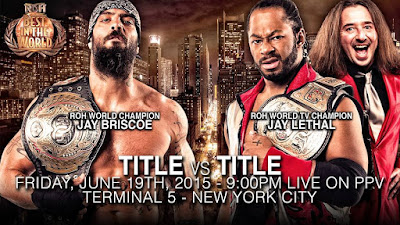 This feels like a truly special match and if you've been following Ring of Honor television over the last few months, then I'm sure this match alone will give you reason to purchase this pay-per-view. It's been a simple story, but one that has built nicely and allowed the audience to be drawn in at their own pace, suiting ROH's one hour of television a week and irregular PPV schedule. Bar a tag team match in November, the two have been kept mostly apart on television for the last six months, but we've seen them collide outside of matches on the microphone a few times, with last week's contract signing really putting the icing on the cake in terms of build.

This should be the match that defines each man's title runs, no matter who walks out of New York with the titles. The build requires this to be the best match that either has had whilst as champion. The caveat here is the worry that ROH will not want to put both of their titles on one man and therefore go for a screwy finish that leaves both men walking out with the titles they walked in with. No matter what has gone before it, this has the potential to kill the match. The company needs to deliver on the superb build, both men are more than capable of that on their own, but if the finish isn't satisfying the match falls apart. I'm hoping for Jay Lethal win as I think it offers more avenues for development going forward and could offer up a juicy rematch for July's Death Before Dishonor.

Singles Match for the #1 Contendership to ROH World Championship 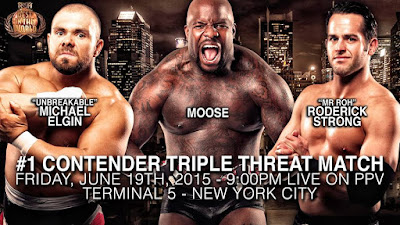 A bit of hodge podge of guys who have a claim for getting a World title shot, this hasn't really received any TV time, beyond Moose's continued push. Moose was undefeated until last week's TV show (suffering surprise defeat to Cedric Alexander), Michael Elgin argues that he never received his one on one rematch for the title (although his TV record has been less than stellar since dropping the title) and Roderick Strong has had a renassisance of sorts since splitting for The Decade in November, going undefeated in singles competition on television, including victories over Adam Page and BJ Whitmer at Final Battle and 13th Anniversary: Winner Takes All respectively.

I've made it known before that I'm yet to be sold on Moose as the next big thing in wrestling, with his most notable matches coming in multi-man efforts, so, for me at least, this match is sink or swim for Moose. He'll be in there with two experienced main eventers for ROH, he either proves that he's ready to be in this spot or looks completely out of his depth and causes the bout to go off the tracks. I'm edging toward Strong picking up the victory here as it would fit well with his current storyline and a bout with Jay Lethal (if he wins tonight) would be another PPV headliner that I'd be hyped for, both in terms of in-ring and the surrounding storytelling opportunities.

The Addiction (C)
vs.
reDRagon 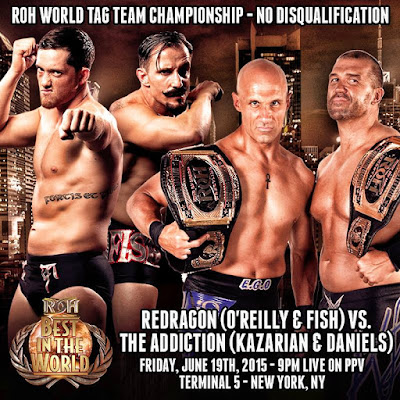 This match has the potential to steal the show. The Addiction and reDRagon are two of the best tag teams in the world right now and should prove so here at the aptly titled Best in the World. If the clash wasn't good enough on it's own, there's plenty of storyline to fuel the No Disqualifcation gimmick with the two teams feuding ever since The Addiction won the tag titles on the 25th April edition of ROH TV, revealing themselves as The KRD (alongside Chris Sabin) in the process. There's plenty of bad blood here and I've a feeling we may seen Chris Sabin get involved at one point of another in what should be a rip roaring tag bout. Expect inventive spots, tag team scrambles and plenty of fun from this one.

Prediction: reDRagon win the ROH World Tag Team Championship for the forth time. 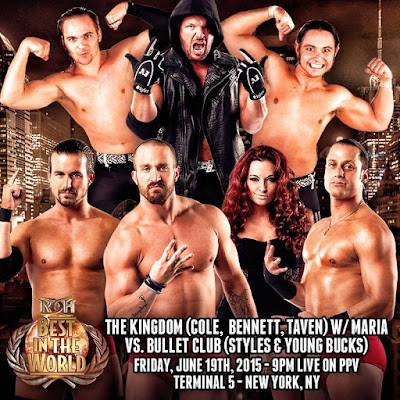 A rematch for the War of the Worlds - Night 2 event, where The Kingdom were able to get the win, this should be a fast paced, thrill-ride of a both. The two factions have gone back and forth across both Ring of Honor and New Japan Pro Wrestling television for the last month or so, with Adam Cole returning just in time to help out his pals Bennett and Taven. The amount of New Japan gold on display should tell you just how highly thought of these men are with the promotion, and their appearance on the undercard here really bolsters the shows foundations, with AJ Styles in particular lending some considerable star power to the event. There's one thing for sure, this party is BYOSK...Bring your own super kicks!

Prediction - The BULLET CLUB get their win back. 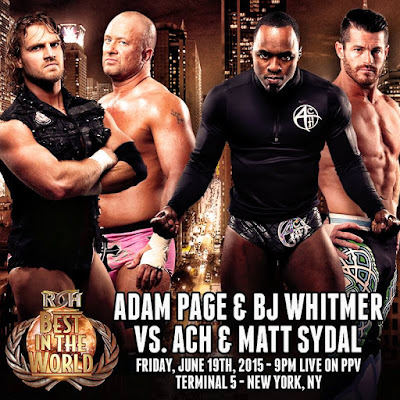 There is no one in professional wrestling that I am more indifferent about than BJ Whitmer. The guy just does nothing for me as a character or as a performer. ACH should bring enough charisma that at least some of it isn't suck into Whitmer's vacuum, with Matt Sydal has got a few funky tricks up his sleeve also. On TV recently Whitmer has been removing himself from matches and replacing himself with The Decade's "young boy" Colby Corino (because Nigel McGuinness allows Whitmer to book his own matches apparently), so we may see some more of that here, much to chagrin of color commentator and Colby's Dad, Steve Corino. 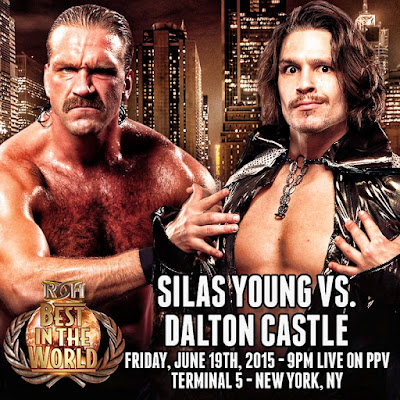 These two characters would seem to be the complete antithesis of each other. The Peacock-esque Dalton Castle and The Last Real Man Silas Young. It seems almost a shame that we haven't seen more of these two opposite each other on television, but that's one of the downsides of only having a one hour weekly product. Castle may have only been around ROH for a short time, but he's been given marquee television matches with the likes of Jay Lethal and Jushin Thunder Liger, as well as appearing at two TNA One Night Only tapings, it's clear that a bright future is seen for the 29 year old, I'd expect to see him go over in this one. 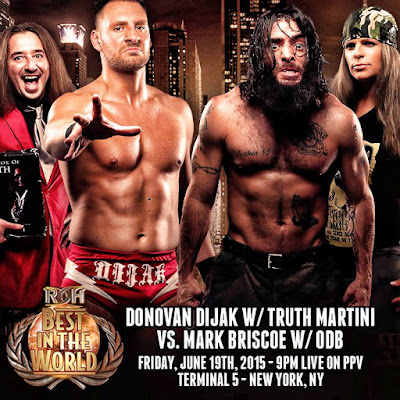 Seemingly almost designed for one or more of the performers involved to be taken out so that they can't get involved in the main event, I'm expecting this one to become a wild brawl leading to a big spot or moment. There's not much to this match, other than being an extension of the main event storyline, which is fine I suppose, but it would be nice to see Mark Briscoe given his own feud if the two are being utilised as singles competitors. I'm convinced this one will be much more of an angle than a match, but it could add a lot more intrigue when it comes time for Lethal vs. Briscoe later in the show. 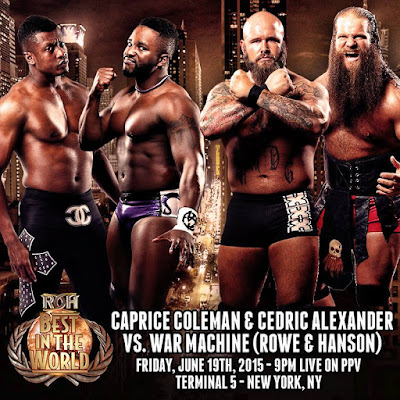 Only announced for the show on Monday, this is your classic Power vs. Speed bout, which should lead to some nice story telling between the four guys. Cedric Alexander's losing streak came to end on television this week, meaning we didn't get the satisfying full year storyline, seeing as his last TV win was over Roderick Strong at last year's Best in the World, but he does seem to be taking a new more aggressive direction. It would seem this match is prime for an Alexander heel turn, bringing an end to the reunion of C&C Wrestle Factory and giving War Machine the win. Alexander has big things in his future, I'm interested to see how ROH handle his inevitable upcoming heel turn.


On closer inspection this is anything but a one match show, with some potential gems up and down the card. Yes, Lethal vs. Briscoe is the hottest feud by a mile and will rightly main event the show, in front of hot New York crowd, but reDRagon vs. The Addiction also has plenty of fire behind it, with the added No Disqualification gimmick adding a little sizzle to the steak. There's a chance for Moose to prove he deserves a spot in ROH's main event scene, a fun looking six man tag, Dalton freaking Castle and the potential for a Cedric Alexander heel turn. If the price of the PPV wasn't so high ($34.95, that's just over £22), then I'd expect a decent buyrate. ROH needs to stop pricing itself out of a market when a month of the WWE Network is only $9.99 and it's so easy to watch shows through other means.

You can order the PPV here to view online, it's also available through satelitte and cable providers in the US.


PPV Start time in our most popular countries